Baseball: No telling where Ohtani's talent may take him: Eppler

If Los Angeles Angels General Manager Billy Eppler has any clues about where Shohei Ohtani's prodigious talents will take him, he is not letting on.

In an exclusive interview with Kyodo News on Monday, Eppler said speculating on whether Ohtani's talents might eventually lead him toward any specific role as a pitcher or position player is not a productive exercise.

"I don't go there. I take things as they come," Eppler said. "A characteristic I think that is important when you are managing athletes is adaptability. You take information as it comes in. You take that and then derive a plan, a prescription and you execute that prescription."

When Ohtani picked the Angels from among seven finalists for his services in December 2017, Eppler was handed a winning lottery ticket.

But claiming the prize season Ohtani produced required more than just getting his signature on a contract and putting him into a uniform. It required an approach that diverged from old-school big league thinking and is still evolving.

Although his elbow did blow out and require Tommy John surgery, Ohtani demonstrated last year that excelling at both hitting and pitching -- as he had in Japan -- was not impossible in the majors. Ironically, had Ohtani gone to the States as an 18-year-old in 2013, when he said he had no intention to do both, Eppler said his side would not have encouraged it the way Japan's Nippon Ham Fighters did. 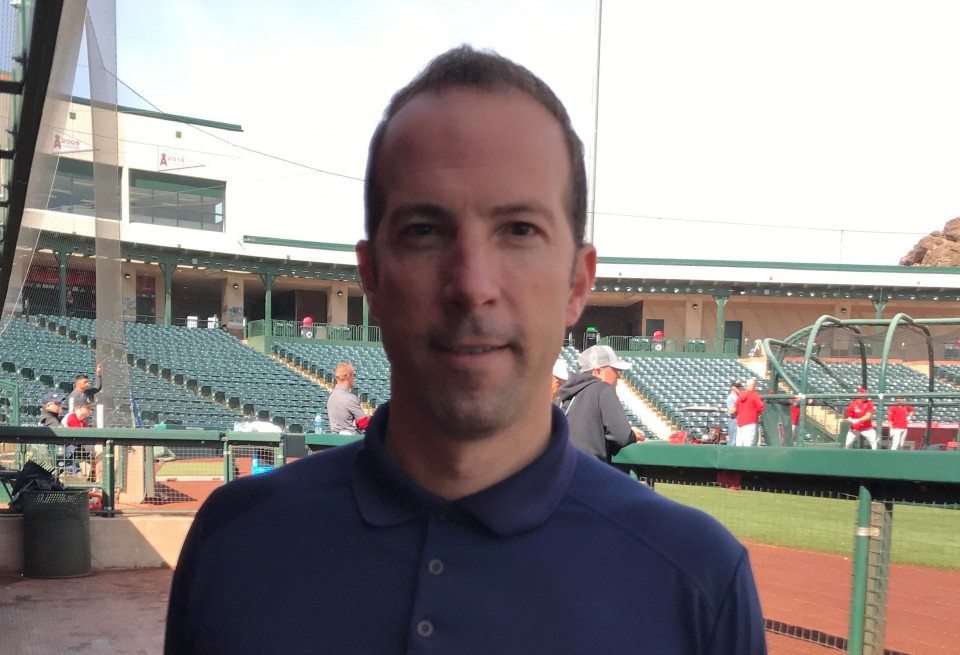 "If that would have been a criteria for signing him as an amateur, then you would have allowed him to do both," Eppler said. "If the player doesn't give you a reason to start diversifying, then why do it?"

"Other players recently have taken that position, (saying) 'I want to do both.' We would allow a player to do that, but somewhere in our mind we would think that...it would eventually split. Baseball a few decades ago probably wouldn't have even allowed that. But now we're more open minded to that, and a little more adaptable maybe."

Because of Ohtani's ability in Japan to sustain his high-velocity pitching late into his starts and lingering questions about how well Japanese hitters' skills could transfer to major league competition, no one really knew what to expect from him.

Just days after his signing, then Angels manager Mike Scioscia suggested it would be overly optimistic to see him as the Angels' regular designated hitter.

When Ohtani failed to hit in spring training, the media scoffed at the team's decision to open the season with him as a DH. Six months later, Scioscia reflected on that decision, saying he had not seen Ohtani's promise in camp, but the organization had -- based on his performance in Japan.

"That was part of the conversations we had with 'Scioc' (Scioscia) leading into spring training," Eppler said. "All of our evidence, all of our data -- and scouting reports to me are data -- pointed to 'he's going to hit.' So we kept telling Mike that the background data says this guy's going to hit."

Eppler had watched Ohtani's progress in Japan since he turned pro and said he marveled at anyone who could develop all of his pitches so quickly while devoting so much attention to hitting. At the same time, Eppler saw Ohtani turning his raw "batting practice" power he had as a teenager into game-changing offense.

"As his hitter intelligence improved, you saw a lot of that raw power...become more useable for run scoring than just show-stopping in batting practice," Eppler said.

And though Ohtani's ability to launch home runs and strike out batters had been the talk of Japan, not all of that talk had been approving.

One of Japan's greatest hitters, Hall of Famer Isao Harimoto, berated Ohtani's efforts for years as selfish and unproductive. And though similar criticism was heard in the States, Ohtani continued to assert that rather than dividing his attention, his twin concentrations completed him.

Eppler for one, believes Ohtani could have an argument.

"I think there's a physical side to that," Eppler said. "He hits left-handed and throws right-handed. So he gets natural cross-core training. To rotate one way, to hit a ball 400 feet (122 meters), and to rotate the other way and throw the ball 100 miles per hour (160.2 kilometers per hour), the energy distribution is being perfectly cross trained. That's an element I've asked some of our strength guys about."

"From a mental standpoint...it would be the awareness of how you recognize pitches and how you see pitches."

While being able to both bat and pitch at a high level is remarkable, Eppler was more interested in how a player could do both over the course of a major league season. So he and some of his staff traveled to the Fighters' minor league complex outside Tokyo to learn what his old club knew about the care and feeding of two-way baseball anomalies.

"They were the ones who test-piloted this. They were a complete asset," he said, adding that the tougher schedule in America with transcontinental travel and more games required extra attention from the Angels staff.

"Our schedule's different from Japan, so we paid attention to miles traveled, arrival times, things of that nature. We paid attention to some of those to decide if we're going to 'green light' him, 'yellow light' him or 'red light' him on a particular day. (Yellow) meaning he might be playing but no batting practice that day, or he's pinch-hit available only or something of that nature."

In the sense that he was attempting something that hadn't been tried at an elite level since the days of America's Negro Leagues, Ohtani was unlike any other major leaguer. But off the field, Eppler said he proved to be just one of the guys.

"Inside that locker room, (Ohtani was) exactly the same as another player: his demeanor and how he engages with his teammates and how his teammates here embraced him right away...that was really good for me to see."

Eppler indicated he did not know how a newcomer trying to do something nobody else did would be received. After all, it is not unusual for older, established major league veterans to show their skepticism.

"You don't know if he's going to have to prove himself. But he's one of us. And our guys in that locker room took a 'he's one of us' approach from Day 1."

In the same way his teammates have embraced Ohtani, the Angels have embraced the idea that other players might contribute with both bat and ball. Eppler said his organization now has five two-way players, two starters and three relievers. While it's still something of an experiment, it is now an experiment with momentum.

Asked if the hard-throwing Ohtani, who had four hits including two home runs hours after learning he needed elbow surgery, has more upside as a pitcher or a hitter, Eppler said, "Woah," as his eyebrows shot up.

"He's impactful on both sides," the GM said. "I couldn't tell you."

What he could say was what others have been thinking for years.

"He's the most fascinating player in the world."