The main suspect in mass shootings at two mosques in New Zealand that left 49 people dead was named and charged with murder in his first court appearance Saturday as the country grieved over its worst terror attack.

Brenton Tarrant, a 28-year-old Australian national, stood in the dock during the morning hearing at the Christchurch District Court, flanked by police officers.

Tarrant, handcuffed and wearing a sack-like prison suit, did not enter a plea to the murder charge and was remanded in custody until April 5.

New Zealand Police said on Twitter that while Tarrant currently only faces one count of murder, further charges will be laid. 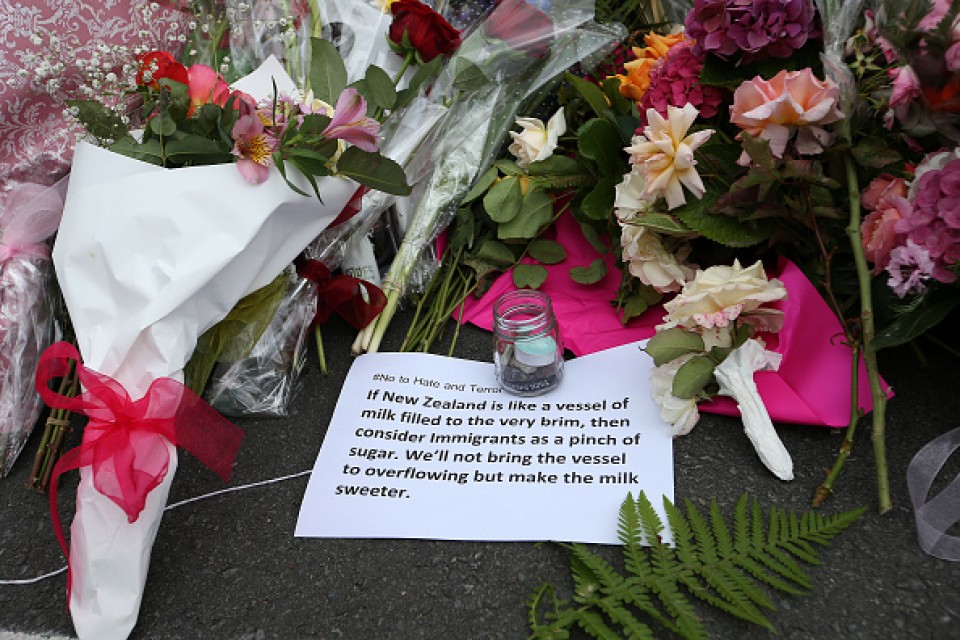 (Messages are left with floral tributes at Deans Avenue near the Al Noor Mosque on March 16, 2019 in Christchurch.)[Getty/Kyodo]

According to court documents, he faces a maximum term of life imprisonment.

Tarrant is one of three people in custody for links to what is being called New Zealand's worst peacetime mass shooting. The country abolished the death penalty decades ago.

At 1:45 p.m. Friday, a gunman opened fire at the Al Noor mosque near a park in the center of Christchurch, killing 41 people. Hundreds of worshippers are understood to have been inside for Friday prayers.

A further seven people were killed in a subsequent attack at the Linwood mosque in a residential area about 5 kilometers from the Al Noor mosque. One person died of their injuries in hospital.

Speaking at a press conference in Christchurch on Saturday afternoon, New Zealand Prime Minister Jacinda Ardern said Tarrant was the "primary perpetrator" in the incident and said it is believed he intended to continue attacking before he was arrested, 39 minutes after the initial emergency call to police.

Initially, 48 people, including children, were treated for gunshot wounds at Christchurch Hospital.

On Saturday afternoon, David Meates, chief executive of the Canterbury District Health Board, said several people were discharged overnight with 36 people remaining in hospital. Eleven are in intensive care.

Meates said those in hospital range in age from 2 to 60, with one critically injured child transferred to a hospital in Auckland. 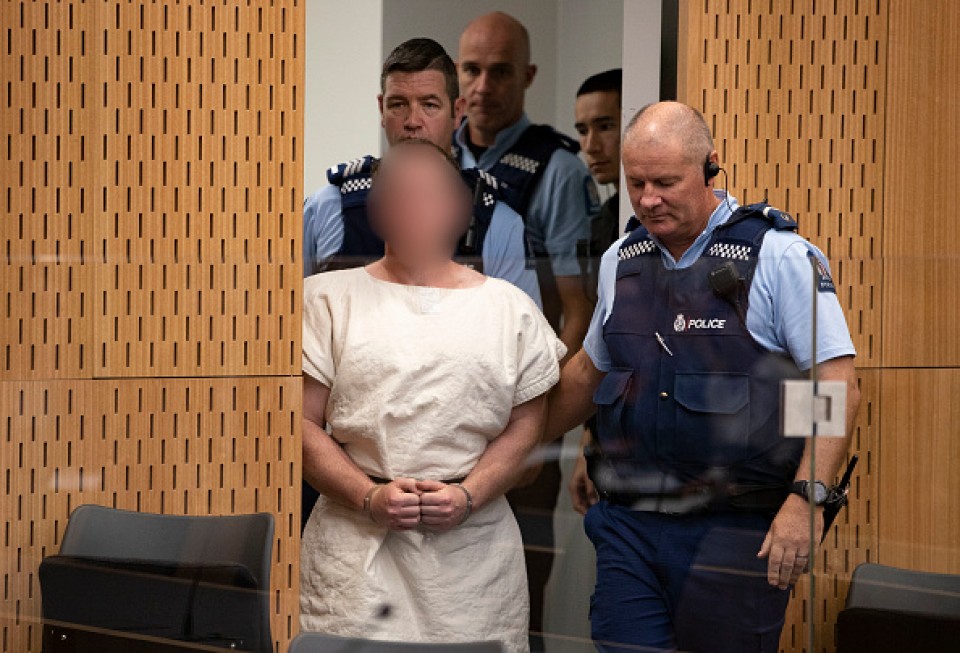 (The man charged in relation to the Christchurch massacre, Brenton Tarrant, is led into the dock for his appearance for murder in the Christchurch District Court on March 16, 2019 in Christchurch.)(EDITOR'S NOTE: Parts of this image have been pixelated at source to conceal the identity of the defendant due to court order.)[Pool/Getty/Kyodo]

On Saturday, the names of confirmed victims in the shooting started to be released, although many families still have not learned of the fate of missing loved ones.

Noraini Milne, 57, managed to escape the Al Nour mosque after the shooting started, but has not been able to find out what happened to her 14-year-old son, Sayyad, who became separated from her in the melee.

"I couldn't find him (at the mosque) and went to the hospital to get more information but I couldn't find out about him," the Singaporean native told Kyodo News outside a facility set up to provide support for victims and their families. "A friend told me (that he died)."

Another Christchurch local whose family member remains listed as "missing" is Yaminabi Daoud, who came to the courthouse in the morning in anticipation of the alleged gunman's hearing. 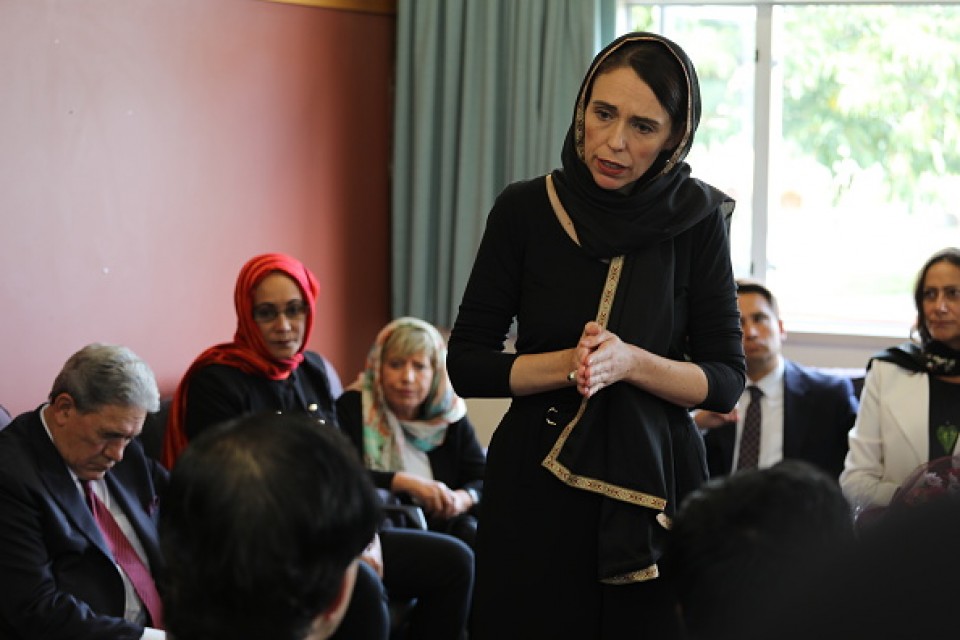 (New Zealand Prime Minister Jacinda Ardern meets with Muslim community representatives on March 16, 2019 in Christchurch.)(Photo by the Office of the Prime Minister of New Zealand)[Getty/Kyodo]

Daoud said his own life had been saved because he was running 10 minutes late to Friday prayers.

Foreign nationals also make up a significant proportion of the victims.

A staff member from the Bangladeshi Consulate told Kyodo News that two of their citizens are critically injured while seven are missing.

Also caught up in the incident were two injured Malaysian nationals and three Indonesians -- two of whom were injured while a third remains unaccounted for, according to their respective embassies.

Ardern said earlier on Saturday the country's gun laws will change after it was revealed Tarrant had obtained five guns legally with a "category A" license, issued in November.

"I can tell you one thing right now: our gun laws will change," she said at a press conference in Wellington. 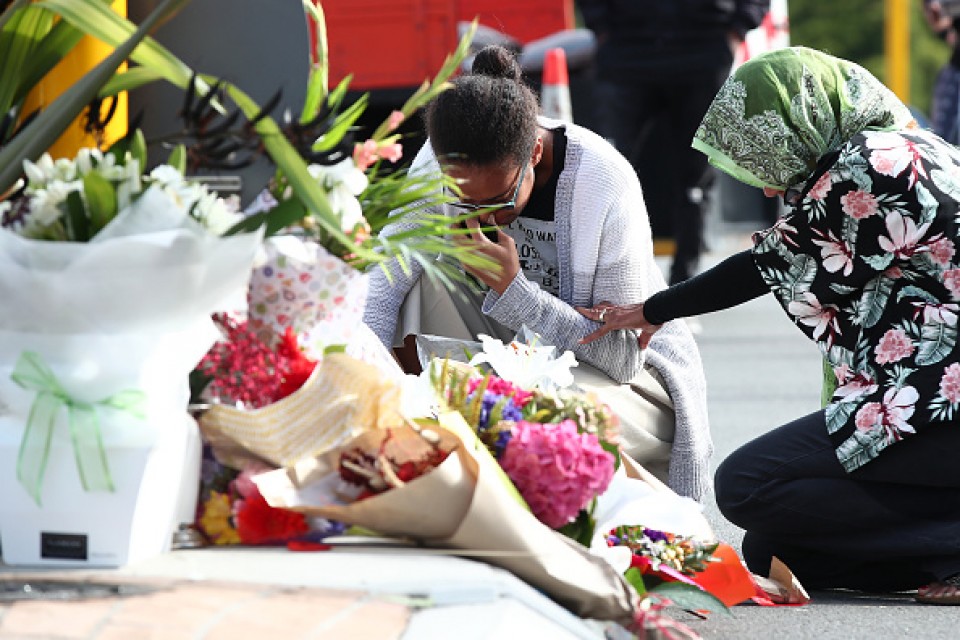 Ardern revealed that two semi-automatic firearms and two shotguns were among the arsenal taken from the suspect by police.

The broader Christchurch community is in grieving.

The city of just over 380,000 people had begun to bounce back after a magnitude 6.3 earthquake in 2011 killed 185 people and caused widespread damage.

Christchurch Mayor Lianne Dalziel said at a press conference early Saturday that the council is providing practical support to the Muslim community, including helping with the many burials which need to be completed as quickly as possible in accordance with religious customs.

She stressed the importance of friends and neighbors coming together to support each other.

"His (the gunman) was the voice of hate, and the only way communities can respond to hate is to come together with compassion and love."