While it may look out of sync with its surroundings, model and radio-controlled car giant Tamiya's "Plastic Model Factory" flagship store has found a happy home amid the office buildings and dining establishments of Tokyo's Shimbashi district.

"Being in Shimbashi seemed like quite a mismatch for a store selling scale models," store manager Takamichi Hangai said recently. "But there are a lot of businessmen and workers (in the area) who used to build scale models. They come in here for the nostalgia. They're coming home." 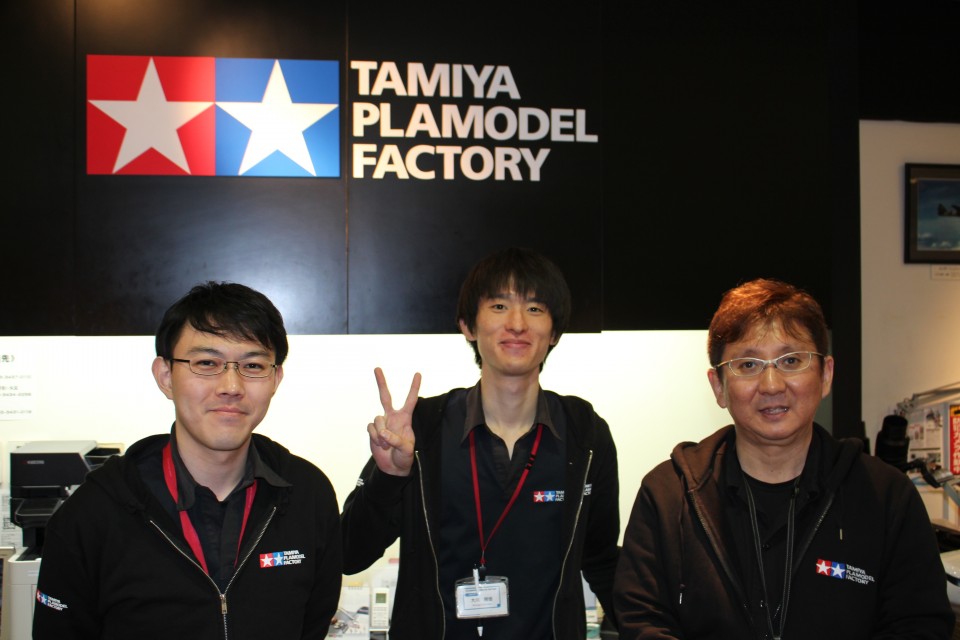 While most of the window displays feature Tamiya's traditional products, models of ships, airplanes, cars and tanks, one is devoted to translucent art objects and fashion accessories and another to T-shirts and other souvenirs bearing the company's iconic two-star, red, white and blue logo. If anything, that variety is a tip-off there is more at play here than just static scale models.

Regardless of what they come for, a lot of the store's visitors have similar wide-eyed expressions as they take in the scope of a store that defies easy expectations.

"We have a lot of celebrities who wear our shirts on TV, who come to the store. Their fans come because of them, thinking that if celebrities they like buy our stuff maybe they will, too. So part of our brand has nothing to do with plastic models."

But for those with an itch to create or build, the shop has something to offer and a friendly staff to help out.

"It's about what you can picture in your mind and enjoy making," Hangai said. 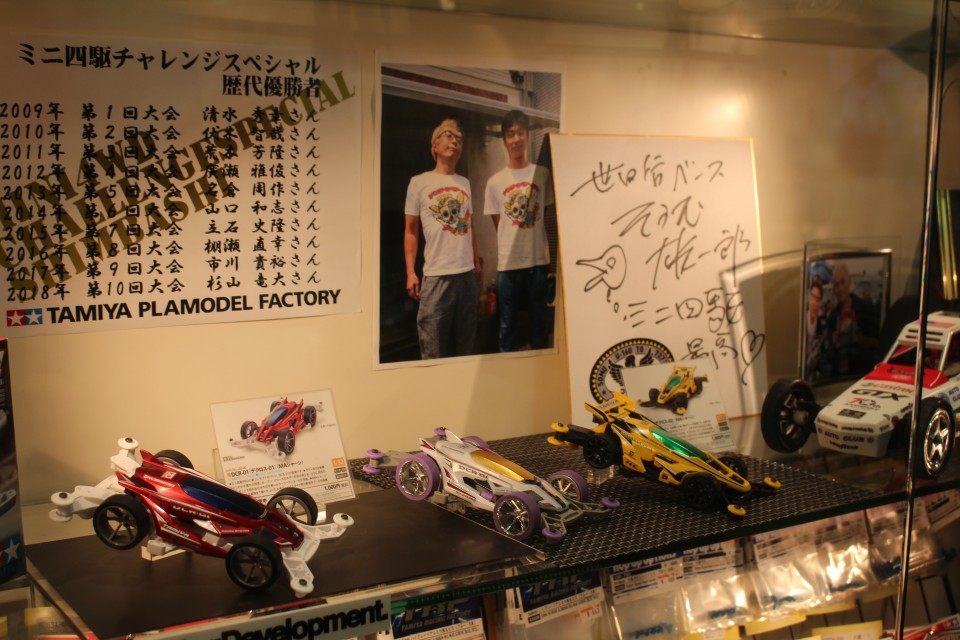 "For example if you buy this (racing car) kit, you generally build it according to the instructions. But there are customers who aren't like that. They say, 'I want to take this kit and make it into a robot, like (in the movie) Transformers.'"

Although the main floor is largely devoted to model kits, parts, tools, and materials, there is much more. On the shelves and interspersed among the various items for sale are engaging dioramas with eye-catching detail. These are built not by the company's craftsmen but are the work of customers.

Indeed, much of what makes the store click is the customers themselves, and not just the celebrities whose autographs line the walls of the remote control race car cave that fills the store's basement.

"The confectionary decorations are a great example," Hangai said, pointing to a display of "cakes, puddings and cookies" that in different surroundings might be edible. 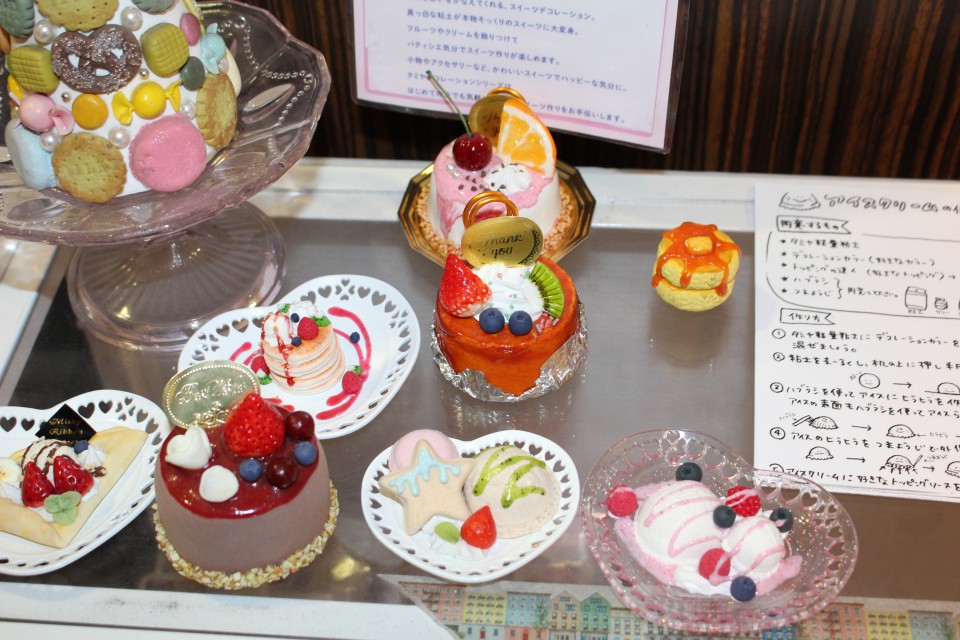 (One product line makes it easy for people to create model food out of papier mache, dye and paint)

"Originally, this clay was for use with plastic models. Because of customer feedback, we started seeing it as something else. It's the same with the (translucent) flower accessory materials. This idea is not something that originated with Tamiya."

Hangai said those new products are proof that Tamiya is interacting with more and more women.

"There are so many women modelers," he said. "In the old days, you'd see grown men, or fathers and sons, or boys on their own coming in to buy stuff. Now we get families. Girls come in because maybe their older brother makes models or boys at school do, and they don't feel excluded from this world. They come with their families and buy models, too."

Family groups, he said, frequently attend races organized by the shop -- either for the popular mini four-wheel-drive track cars or tricked out lightning-quick RC cars that are a far cry from the company's iconic Grasshopper, Frog and Hornet buggies that made the brand a big name in the overseas RC community in the 1980s.

"I love this job. I get thank you letters sometimes and I treasure them," Hangai said. "There was one little boy, and the first time he bought a (RC) car and tried to race it, he couldn't get the hang of it. But he kept coming back and I was able to teach him various things. As he got bigger, he finally won a championship and he thanked me." 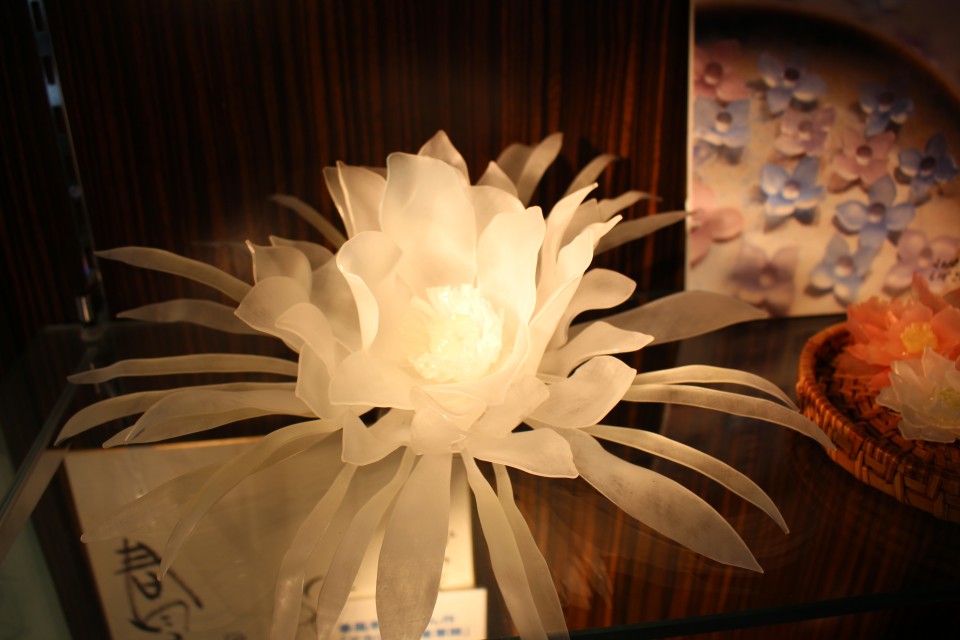 (Flower art, created by a customer illustrates the broader reach of a hobby once dominated by men and boys)

"The kids come back and give me thank you letters and that's such a thrill. In most stores, when somebody buys something, they don't come back. It makes me think that there aren't many jobs better than this one, that you can give joy to people."

It's not surprising then that Hangai rated being a good listener as a crucial skill for his line of work.

"The ways our customers choose to enjoy themselves changes from day to day," he said. "My job is to have a firm understanding of that, accepting it and then studying up so I can give them useful advice. People are going to find new and different ways to have fun, and those aren't being driven by suggestions from us."

And with this year's Rugby World Cup and next year's Tokyo Olympics, he said learning to divine customers' needs for Tamiya products with their global appeal requires even more skill.

"The number of foreign customers is increasing rapidly. That means we have to concern ourselves with the needs of overseas visitors in addition to the needs of our Japanese customers," he said. "They are going to increase and we need to be prepared to offer them advice, too. To do that, we need an understanding of how people overseas want to make use of our products."

"It's never about being correct or incorrect, it's about enjoyment, that's all you need."