Despite there being a long history of bug-eating in rural parts of Japan, for the average consumer nowadays stomaching creepy-crawlies is too much to ask.

But like many edible insect ventures springing up overseas, one Kyoto startup has been bitten by the same bug and is making cricket powder protein bars palatable for the masses.

BugMo Co. Ltd. not only see crickets as a much more sustainable protein source as compared to beef, chicken or pork but ultimately an essential ingredient in a whole new food ecosystem amid a looming food crisis driven by shrinking resources and climate change.

"There are many edible insect ventures emerging overseas because of insects' importance as a sustainable protein source. But our focus is on food production. Of course, with the trend it would be great if we can also help reduce some of the planet's environmental problems," Fu Nishimoto, 21, BugMo's COO, said in a recent interview. 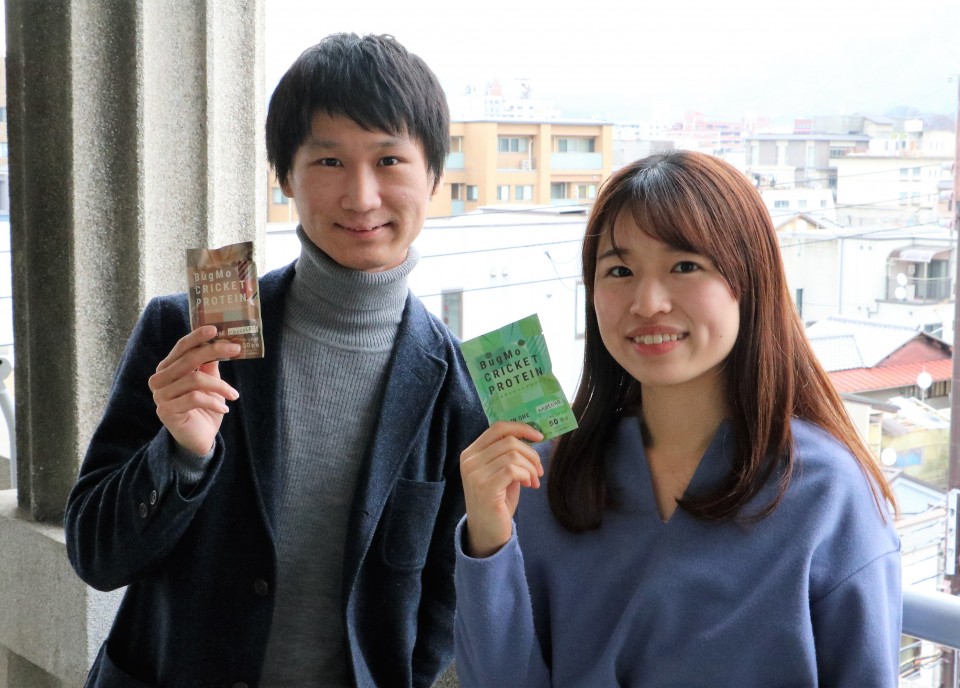 The company's current product, which it sells to athletes and health-conscious consumers, contains 50 crickets in each protein bar and retails for 500 yen (about $4.50). It is sold online as well as to wholesalers, at events as novelties, and even in an "insect eating vending machine" located in Kumamoto Prefecture, southwestern Japan.

The bars, which come in chocolate and matcha flavors, include dates, nuts and raisins, and are packed with 10 grams of protein and the nine amino acids essential for muscle building, according to BugMo.

BugMo currently sells about 1,000 protein bars per month but is aiming to expand to 100 fitness clubs and health stores around the country by fall. The company website bills the bars as being gluten free with no artificial additives or preservatives.

"The great thing about crickets is they are low fat, high protein. Those who exercise will use different combinations of supplements with protein and omega 3 fatty acids but if they use our product they get all of it in one," Nishimoto said.

"Our first goal is to reach 10 stores that regularly carry our cricket protein bars and become repeat customers. I think they will spread by word of mouth by people who have eaten them."

Both Nishimoto and the company's 32-year-old CEO Yusuke Matsui explain that overcoming the repulsion felt when eating a bug, with its spiny legs, wings, eyes and other unappetizing body parts, is of major importance to their business model.

In the business of entomophagy (human bug consumption), overcoming this "ick factor" is a huge hurdle, so the bugs must fly under the radar, the BugMo cofounders say, and taste good.

"We thought that no matter how nutritious they are if people see the actual crickets, it would be difficult for them to stomach. So that's why we decided to make it a powder," Nishimoto said.

Once people become used to eating crickets in a pulverized powder, or flour, which isn't bitter or pungent in smell, but "nutty" or "smoky" in flavor, they can take the plunge, Matsui says.

"(The powder form) helps people think bugs are okay to eat even if, next time, they try something in the shape of a bug. We've seen people try it through our own taste experiments. The next thing is to bring out the umami," Matsui said.

BugMo, a wordplay on bug movement, currently uses cricket powder imported from Thailand, but the company plans to cultivate all its crickets in Japan within the next several years. The duo has already set up a small pilot factory, cultivating about 40,000 crickets in Shiga Prefecture, east of Kyoto.

Aside from the nutritional benefits of cricket protein, with its essential minerals and vitamins such as high levels of iron, calcium, and fiber, the eating of insects is often touted as being relatively environmentally-friendly as compared to other forms of protein, as well as being more efficient.

A 2013 report by the United Nations Food and Agriculture Organization recommends including edible insects into peoples' diets in order to reduce humanity's environmental footprint. Insects are nutritious, with high protein and mineral content while being low in fat. Nearly 2,000 edible insect species have been identified worldwide.

Crickets, which take 6 to 8 weeks to breed, consume fewer resources than cows and chickens, thus reducing the need for the production and transport of grain feed. The need for more and more pasture for livestock is one of the major driving forces behind deforestation, the FAO report states.

"Since the 2013 FAO report there has been a rising interest in insect-eating in Western countries and even Japan," said Yukari Nishioka, an associate professor of nutrition who studies methods of cooking edible insects such as crickets, locusts and cockroaches at Osaka International University.

"You can say that the cultivation of insects and food manufacturing that uses insects provides great business opportunities. But to see a development in insect eating, the point is whether the bugs can be recognized as a food," Nishioka said, adding that their popularity will likely take longer to gain a foothold across Japan.

BugMo, which Nishimoto and Matsui started in May 2018 in the Kamigyo Ward in Kyoto, has enlisted culinary experts and chefs to help in developing the company's future products.

"We have chefs who are cooperating with us to improve the taste of the crickets. For example, chefs who cook Spanish food or those who make creative cuisine. We aim to incorporate the dishes that are most tasty into our new products. I don't want to give away too much," Nishimoto says with a laugh.

Later in March, she says the company has plans to hold an event with top chefs at a restaurant in the Kansai region where people can try cricket dishes in all their gustatory glory.

Participants do not need experience cooking crickets, said Matsui. "It's important that the chefs use their own sensibilities to create dishes with potential."

Japan's most prominent edible insect evangelist Shoichi Uchiyama hails from Nagano Prefecture, where there is a long bug-eating tradition. He has released many insect cookbooks and even holds events once per month with his Edible Insect Study Group in Tokyo.

He says although startups like BugMo are still rare in Japan, the potential for growth in the edible insect culture is there.

"There is an insect food culture in Nagano, Gifu and mountainous areas that still thrives today in Japan. For example, they eat locusts and other insects such as silkworm pupae and bee larvae. I can definitely see how (crickets) could have mass appeal," adding that experience eating insects growing up helps.

Uchiyama recommends larvae and grasshoppers in spring, cicadas in summer, Japanese giant hornets and sakura caterpillars in fall and longhorn beetles in the winter. One of his specialties is potato salad with a giant water bug.

Rhinoceros beetle larvae, which eat a lot of rotten vegetation, and of course poisonous insects, should be avoided, he said.

"The sakura caterpillars really have a strong fragrance of cherry blossoms and are delicious to eat with caramelized sugar," Uchiyama said. "One of my favorite dishes to make is roasted longhorn beetle larvae on an open fire. It's crunchy, smoky and creamy on the inside."

He did point out that prospective bug hunters should be informed about their prey, however, with cockroaches found in the home definitely off the menu.

Cricket protein startups, such as Chapul in the United States, and Europe are growing fast.

The American edible insect market exceeded $55 million in 2017 and is expected to see gains of more than 43 percent by 2024, according to the research company Global Market Insights. Last year, Sainsbury's became the first British chain supermarket to sell barbecue-flavored roasted crickets.

"Production of crickets is (or can be) more sustainable than the three conventional production animals (of beef, chicken and pork)," Dennis Oonincx, an entomologist and researcher at Wageningen University in the Netherlands, told Kyodo news in an email.

"It is a real addition for people who want to combine animal production and sustainability," he said, but added, "it should be mentioned that plant-based materials are generally more sustainable than animal products. Crickets are no exception to this."

Francisco Sanchez-Bayo, an environmental scientist and ecologist at the University of Sydney who was the lead author of a 2018 study that predicted the large scale extinction of insects, said while the collapse of the world's ecosystems could be catastrophic, humans would remain "the most resilient species to inhabit the planet."

"Even if the loss of pollination services will undoubtedly reduce our food sources by 70 percent, we'll still have cereals, seafood and meat to eat -- and also cricket protein in factories."

Oonincx added, "Crickets are farmed, not caught in the wild, so eating crickets will not directly impact wild populations."

So what lies ahead for BugMo? For now, the company wants to put all its energy into being a mass producer of cricket-based foods.

"When people say crickets in Japan, we want them to think BugMo. Here we want to reign supreme," Matsui said.

It appears competition from other startups to spread edible bug culture in the country and beyond will only intensify. Aside from the food culture barrier, making insects more affordable per kilogram for the average consumer remains a big challenge.

"We, of course, want to expand around the world and make use of other insects that are applicable to particular countries, but our main objective for the coming years is to establish a foothold to make tasty crickets," Nishimoto said.