Japanese guitarist Miyavi performed at the El Rey Theatre in Los Angeles, California late last month with an array of guests joining the musician on stage to celebrate the release of his latest album “SAMURAI SESSIONS vol.3 - Worlds Collide.”

It was the initial on-stage appearance of Miyavi, however, to the intro of his album “Worlds Collide,” that saw the voltage at the venue in L.A.’s Miracle Mile area instantly shoot up, making fans forget about the outside cold on the February 23 evening.

Collaboration songs “Rain Dance” and “Flashback,” among others, soon followed. In a contrast to Miyavi’s almost monotone outfit and guitar, stage lights were constantly changing, painting the guitarist and the venue with the color and mood of each song. 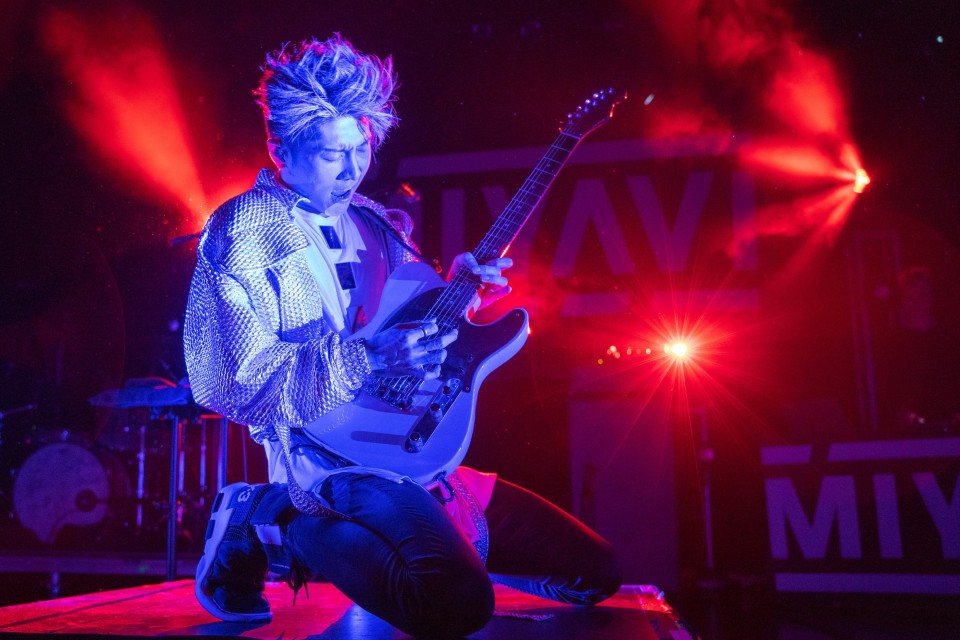 “Thank you so much for coming! Iʼm so happy to be back in L.A.  Every time I have a show here, you guys come and Iʼm very thankful.  But Iʼm living here! Weʼre neighbors!”

The set continued with the raging songs “In Crowd” and “Sicko Mode” during which Miyavi delighted the audience with contrasting sides of his on-stage persona -- by turns the mischievous, smiling boy falling in love with a guitar, and then the glamor that only a true rock star can show.

One of the many highlights of this show was the appearance of special guests.

Miyavi welcomed rapper Duckwrth on stage at the El Rey, teaming up with the L.A. native to perform “U.G.L.Y.,” while singer and producer Mikky Ekko was also on hand for the collaboration “Knock Me Out” as Miyavi gave the audience just a glimpse of the wide circle of friends that he has around the world. Fans let out a great cheer as CheʼNelle, a singer who has gained much popularity in Japan, came on stage to perform “Forget You.”

Alongside fresh songs from his latest release Miyavi brought out older fan-favorites such as “Ha!!!!!!!!!!!!!!!” and “Selfish Love,” showcasing his guitar slapping technique that continues to amaze.

The encore at the El Rey began with “Fragile,” a song in which Miyavi shows the importance of facing oneʼs own vulnerability.  For the following number, “Me and the Moonlight,” Malaysia-born singer Yuna took to the stage -- her powerful vocals and Miyaviʼs unique guitar sound mixing dreamily to create the perfect lullaby for adults. After “Real?” the concert ended with “WHATʼS MY NAME?” one of MIYAVIʼs most loved songs.

With over two years having passed between albums fans at the El Rey were finally able to hear what Miyavi has been up to during that time.  And with this show and the release of “SAMURAI SESSIONS vol.3 - Worlds Collide” the guitarist has proved to us once again that music is a never-ending road with no set goal, and we cannot wait to see where the samurai guitarist is heading with his new collaborations and evolving styles.