Baseball: Yoshihisa Hirano keen to stay ahead of curve after impressive debut

Yoshihisa Hirano is on a mission this year to prove his 2018 big league debut season was more than beginner's luck.

"Considering how difficult spring training was, last season turned out better than I thought it would," Hirano said Saturday in an interview with Kyodo News. 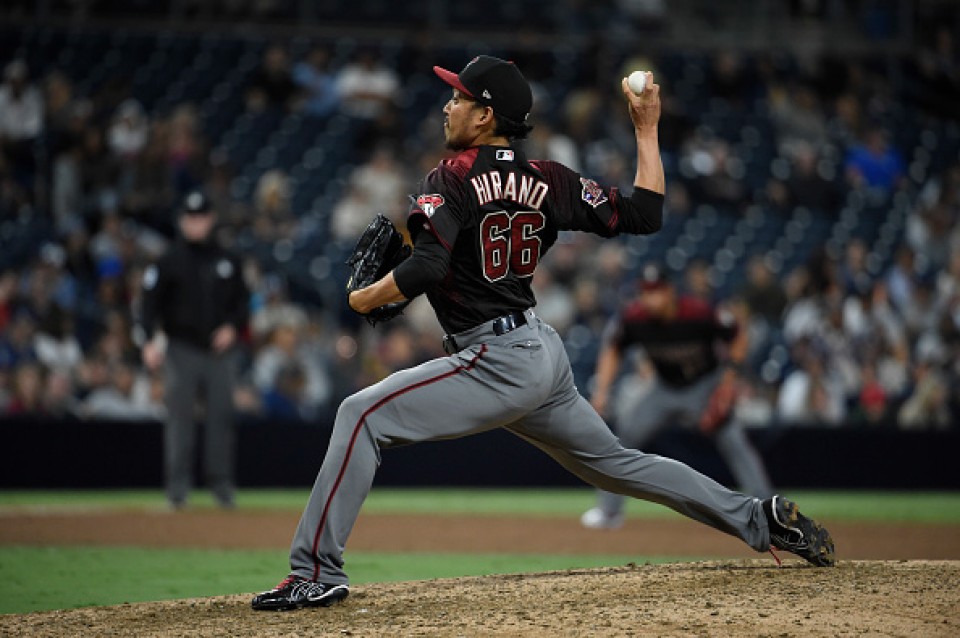 The 34-year-old right-hander pitched in a career-high 75 games last season -- the most ever for a Japanese major leaguer -- and set an Arizona Diamondbacks' team record by not allowing a run in 27 consecutive games.

"Last year, a lot of batters were facing me for the first time and that gave me an advantage," Hirano said. "But this year, I think some batters will have a better approach against me and some will have done their homework."

"My response to that is to throw strikes, get ahead in counts and get batters to chase balls out of the strike zone. I want to throw strike after strike, impose my tempo on the game, and avoid giving up walks. I tried to do that last year and I'm even more determined to do that this year."

If Hirano did not quite check off all the boxes he wanted to last year as a pitcher, it is hard to tell from his consistent results month to month -- a remarkable achievement considering the number of changes first-year players from Japan face.

"It takes a very unique player to come here, trust what he's hearing, apply it and continue to play his own game," said Diamondbacks manager Torey Lovullo, who spent his final professional season in 2000 with the Yakult Swallows of Japan's Central League.

"You have to combine things. I think Yoshi did a great job of pacing himself for a grinding season. He made incredible adjustments."

Hirano said his consistent results were not something that happened overnight, but rather the result of a long process that started more than a decade earlier.

"If you're over 30, you have to be consistent," he said. "I was diligent about maintaining my physical condition and form, so I could head off any big drop off in performance. To be honest, it wasn't easy, but I intend to pick up where I left off last year."

Hirano said he was fascinated by fitness and conditioning as a university student and was proactive in working with the Orix Buffaloes' training staff after he joined the Pacific League club in 2006.

"I learned a lot on my own, and was taught a lot. That has really paid off since I turned 30," he said. "I think last year proved I had been on a good trajectory during my time in Japan."

This year, however, Hirano is working on a new trajectory -- or rather a new pitch for his arsenal. After relying exclusively on his fastball and splitter last year, he is brushing up a curveball, a pitch most Japanese hurlers throw now and then to get first strikes.

"I wanted another offspeed pitch to give batters that much more to think about," he said.

"I'd thrown a slider and curve before. I couldn't make my slider break last year and didn't throw it a single time all season. So this spring I went back to practicing my curve, to give my pitching a little more breadth."

"When I'm in trouble, I still have to rely on the fastball and split, though," he added.