A northeastern Japanese city has been working on a project to farm sea urchins, an expensive delicacy in the country and elsewhere, by waste cabbages in lieu of wild ones during the winter season.

The project by the city of Mutsu in Aomori Prefecture is aimed at securing a new source of income for local fishery operators when they do not catch wild sea urchins, which grow by eating seaweed and come into season between April and July.

Natural sea urchins do not grow well in winter as there is not much fresh seaweed. A fishery cooperative in the city's Ohata area, participating in the project, has refrained from picking them up during the season.

"We want to create a new business model that can give hope for fishery operators," said Mutsu Mayor Soichiro Miyashita of the experiment using leaf vegetables disposed of by supermarkets. 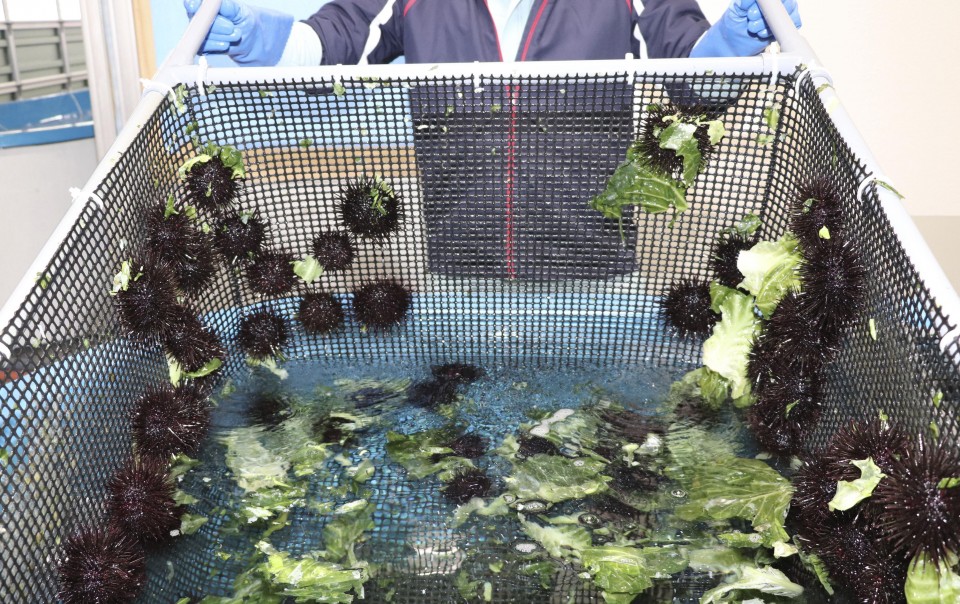 Their challenge started after officials heard about the idea of cultivating sea urchins with cabbages when they visited the Kanagawa Prefecture Fisheries Technology Center in Miura, south of Tokyo, last June.

The edible interior "lobe" of the sea urchin, a small creature with a round prickly shell, is among the most popular items for sushi.

After carrying out the experiment between September and December, the city and the fishery cooperative learned that sea urchins raised by the vegetables were almost equivalent of those in high season and tasted good.

The farmed sea urchins also contained enough amino acids such as glycine and methionine, which make up the seafood's characteristic savor.

They are now hopeful about shipping them to the market during the off-season, possibly this year.

The city received favorable feedback on the vegetable-fed sea urchins when it held a tasting party earlier this year.

"In the future, we want to expand the scale of the farming and make it a tourist attraction," said Kazuo Tachibana, head of the city government's Ohata Office.