If things go the way Kenta Maeda hopes, his new changeup will help him stay in the Los Angeles Dodgers' rotation and earn the kind of applause the Japanese right-hander considers a distinct part of the major league experience.

After he shifted to the bullpen late in the 2017 season, Maeda was expected to spend all of last year in the rotation, but it didn't work out that way. Instead of being a rotation mainstay, he came out of the bullpen in 19 of his 39 regular season games.

When asked about his current ambition, Maeda said Thursday in an interview with Kyodo News, "I want to win a World Series, and of course to remain in the starting rotation." 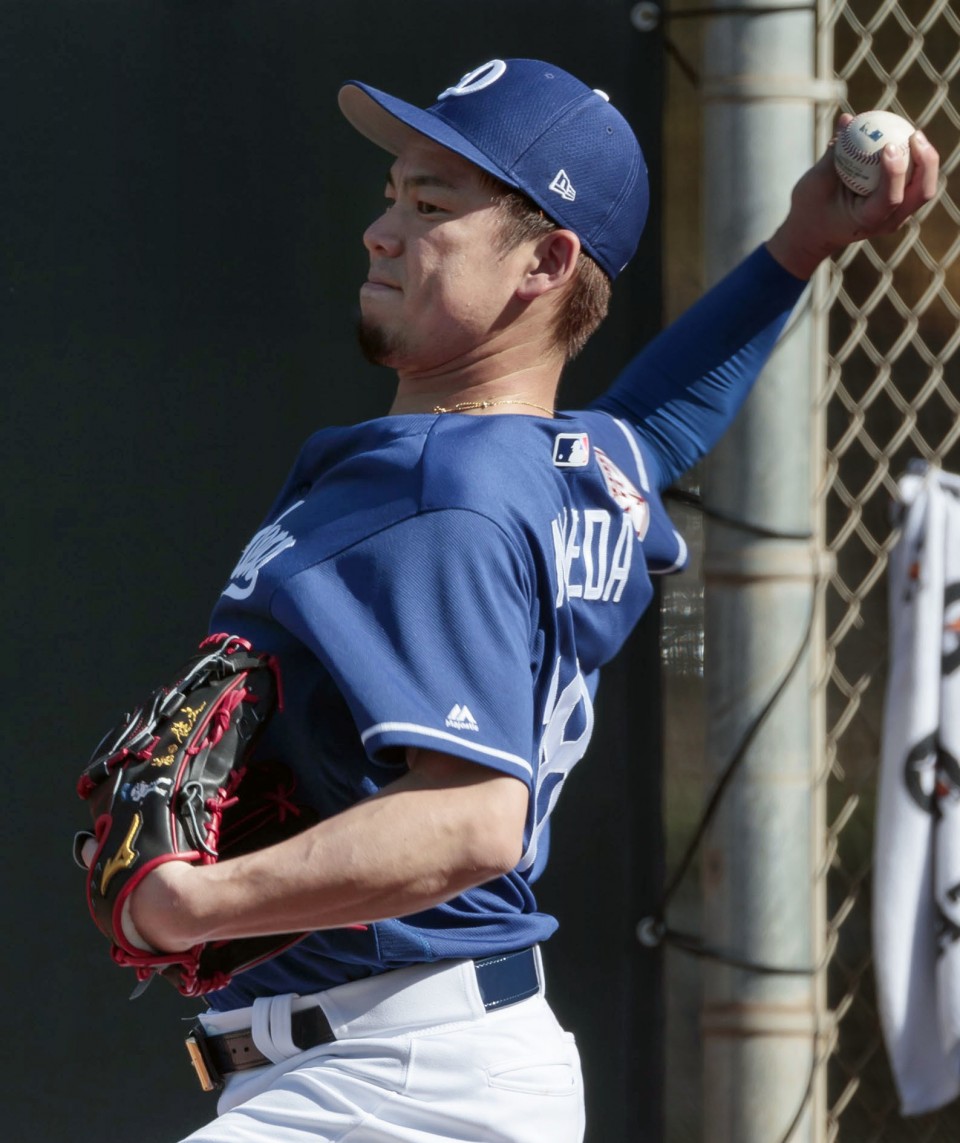 The problem is that with each passing season, left-handed hitters have gotten better at hitting Maeda. This encouraged manager Dave Roberts to move him to the bullpen and pushed Maeda to find a solution, ditching his old changeup for a new one.

"I threw a new changeup last year and got good results with it," he said. "That gives me a lot of confidence for this season because I'll be using it from the start. My issue was left-handed hitters and now with my changeup, whatever anxieties I had about facing lefties are gone."

"I knew I had to do something differently last year. I couldn't keep throwing the same changeup. For a long time I was looking around for something else. I came upon this by chance, playing around with the ball, and thought this is going to work."

His old changeup had been effective in Japan, but was not so useful in the majors. So he switched from a pitch that was essentially a slower-version of a fastball to something more like a forkball, which drops.

"It's a pitch I can get swings and misses with. The changeup I had been throwing had been a contact pitch, to get batters to hit into easy outs. But now my strikeouts are increasing." 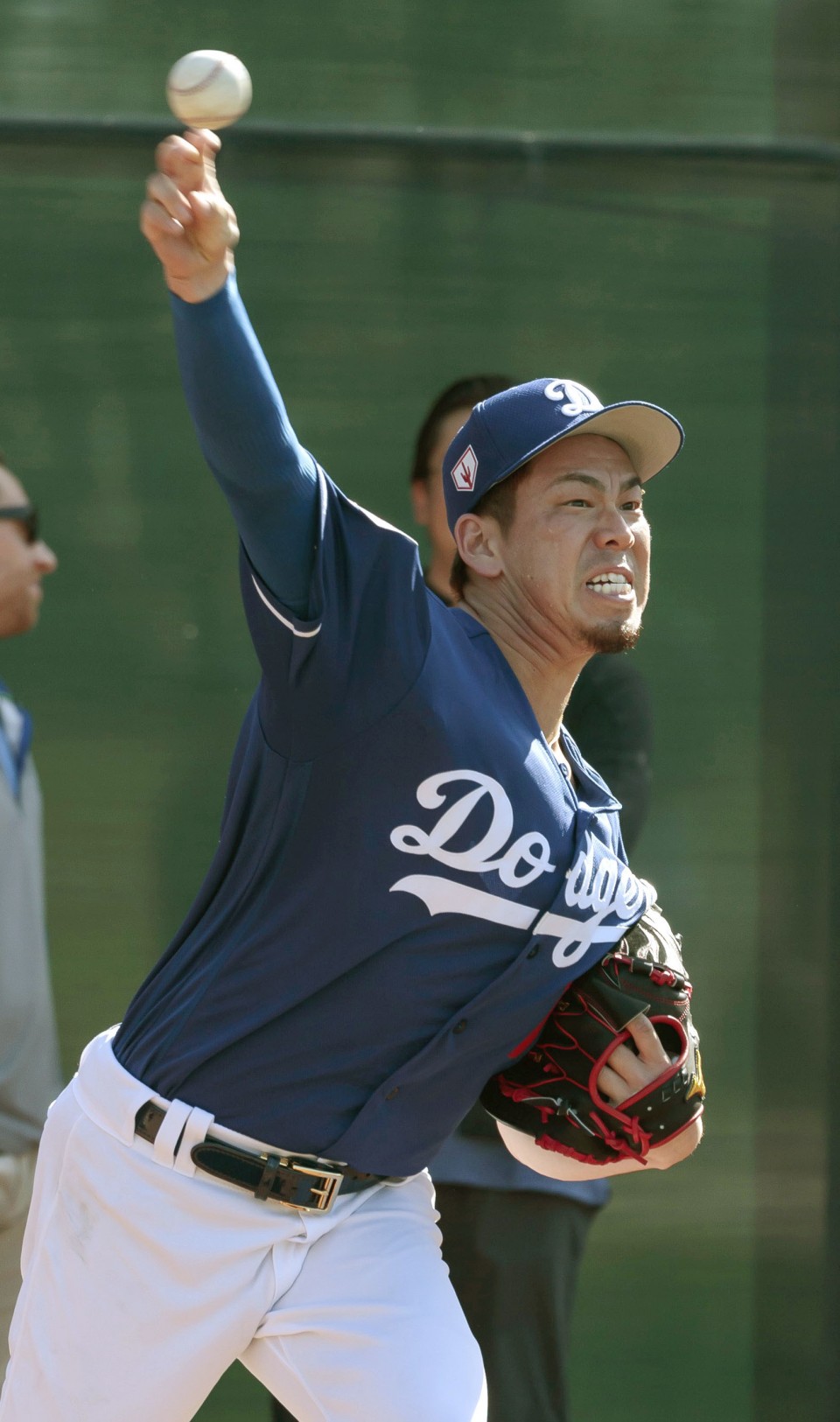 Like the new change in his arsenal, much of Maeda's story in the big leagues has been about negotiating the differences between Japan's game, the American game he expected, and the reality he experienced after arriving.

In 2015, his final season with the Hiroshima Carp of Japan's Central League, Maeda teamed up with former big league pitcher Hiroki Kuroda, who specialized in a two-seamer -- a fastball with more with more sink and horizontal movement.

"Kuroda threw that two-seam really well. And I thought I wanted to throw it well, too. But I wasn't able," Maeda said.

"We Japanese have this exaggerated perception that American pitching equals throwing (two-seam) fastballs with lots of movement. As a result, I thought I also had to throw them, too. But I just couldn't."

In addition to a different spring training rhythm, with shorter training hours but no days off, Japanese players have to cope with smoother baseballs and harder mounds -- and the fact that the baseballs used in the majors vary more from one to the next than they do in Japan.

"Some are larger, some smaller," he said. "But the thing about that is to not let it get to you. If you let it bother you, you can't pitch. You have to accept that these are American balls, that's the way it is, and move on from there." 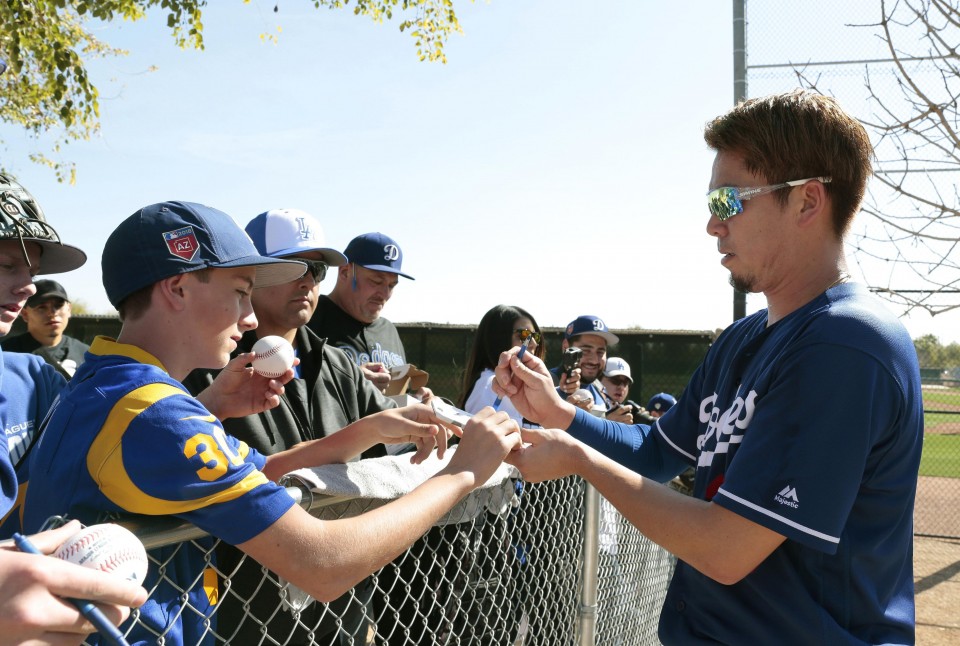 Maeda also had to move on from a common perception among Japanese pitchers that their fastballs are not fast enough to succeed in the majors. His 2017 bullpen stint saw him work more aggressively with his fastball, something that paid off in better results against right-handed hitters and more strikeouts.

"A lot of us are fast by Japanese standards, but our velocity is only average (in the majors)," he said. "Because we feel they will get hit more because they lack velocity, we tend to shy away from throwing them. But velocity isn't everything."

With an already solid slider, his new changeup and more aggressive approach with his fastball, Maeda is hoping to enjoy even more of his favorite part of American baseball culture -- the standing ovation.

"Japanese cheering groups are always playing their musical instruments," he said. "That enthusiasm is kind of constant. But in America, if you don't do well, people don't get too worked up. But if you pitch well, you get that applause."

"For a pitcher, nothing beats having everyone standing and cheering when you leave the mound. At that instant, you are as happy as you possibly can be. I think, 'This is really what America is like.'"