Thirteen same-sex couples demanding marriage equality filed lawsuits against the government at district courts across Japan on Valentine's Day on Thursday, arguing that its refusal to allow them to marry is unconstitutional and discriminatory.

Each of the 26 plaintiffs is seeking 1 million yen ($9,000) in compensation, claiming that the government's failure to recognize same-sex marriage has caused them emotional distress in what their lawyers say is the country's first lawsuit challenging the constitutionality of such negligence.

The damages suits were jointly filed by the couples who are in their 20s through their 50s, and include Japanese and foreign partners, at the district courts in Tokyo, Nagoya, Osaka and Sapporo.

"We are starting a long fight to pursue marriage equality through the courts. We would like to fight with all the sexual minorities in the country and their allies," said Kenji Aiba, a 40-year-old plaintiff, in front of the Tokyo District Court.

The 13 couples hope their complaint will lead to a change so that same-sex couples will be recognized by Japanese society and, as their brief says, "Have their difficulties resolved and their dignity restored." 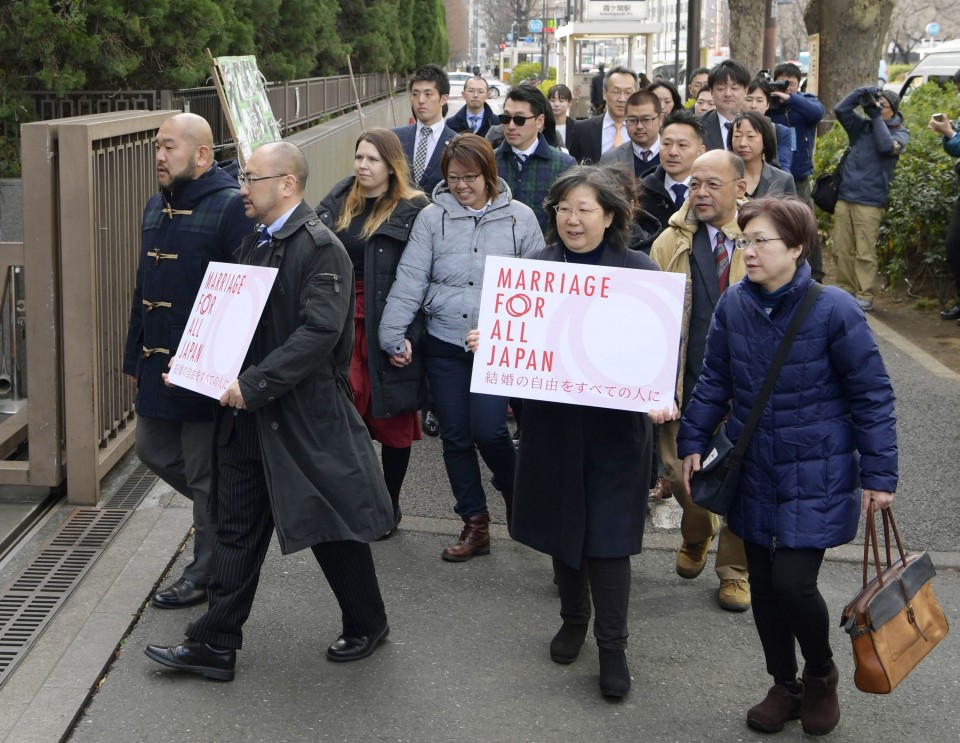 The argument over marriage equality revolves around Article 24 of the Constitution which stipulates, "Marriage shall be based only on the mutual consent of both sexes and it shall be maintained through mutual cooperation with the equal rights of husband and wife as a basis."

The plaintiffs' lawyers argue that the article's intent was to preserve gender equality and individual respect, and it does not preclude marriage between same sexes.

"Article 24 ensures that legal marriage only depends on the agreed-upon wish by individuals without intervention from the government or other third parties," their brief reads.

The government, however, interprets the article as applied solely to heterosexual couples. It has also indicated that the term "husband and wife" used in civic law and family registration law refers to a man and a woman, and thus it cannot accept marriage applications from gay and lesbian couples.

"This is a subject that goes to the root of how a family is constructed and thus necessitates extremely careful study," remarked Chief Cabinet Secretary Yoshihide Suga on Thursday on same-sex marriage.

Suga, the top government spokesman, declined to comment on the lawsuit except to say that the Justice Ministry will "scrutinize it carefully and determine future responses."

Although the government refuses to recognize same-sex marriage, more than 10 cities and other municipalities, including the Tokyo wards of Shibuya and Setagaya since 2015, provide "partnership certificates" to such couples in order to alleviate some of the difficulties which heterosexual couples do not face.

Without marriage equality, same-sex couples cannot inherit property without a will, benefit from income tax deductions for spouses or have co-parental rights over their children.

For international couples, non-recognition adds another layer of complexity. Residency for foreign partners cannot be assured without a spousal visa, says Kristina Baumann, a 32-year-old German plaintiff, who has been with Ai Nakajima, 40, since 2011 and is in Japan on a student visa. They have already tied the knot in Germany.

"Our daily life is always surrounded by fear that something could happen," Baumann told Kyodo News after the couple had filed the lawsuit.

Same-sex marriage was first legalized in the Netherlands in 2001. It is currently recognized in more than two dozen nations and areas mostly in Europe, the latest being Austria in January.

In Asia, Taiwan is expected to become first in the region to recognize it in May.

"I really think this is an important step to go forward for Japanese society," said Baumann. "When it goes through Japan, other countries may take steps forward."

"This is another milestone for Japanese history and also for LGBTQ in the world," added her partner Nakajima. She is ready to take the fight up to the Supreme Court. "Somebody has to take action," she said.

In Japan, at least one in 11 people identify as lesbian, gay, bisexual or transgender, according to a survey conducted last October by advertising giant Dentsu Inc., covering 60,000 people aged between 20 and 59 nationwide.

Discriminatory comments are still being made in the country against the LGBT community. Last year, a lawmaker from the ruling Liberal Democratic Party, Mio Sugita, faced criticism for saying in a magazine article that the government should not support sexual-minority couples because they cannot bear offspring and thus are not "productive."