Ryoyu Kobayashi won his 11th event on the 2018-2019 World Cup circuit on Sunday, the third day of competition at Willingen, becoming the sixth ski jumper in history and first Japanese to post 11 wins in a single season.

Kobayashi, who had the longest jumps in both rounds, also claimed the overall Willingen 5 win, in which all five jumps -- qualifying and both jumps on Saturday and Sunday -- counted. He scored 737.5 points to earn the 25,000 euro extra prize money. 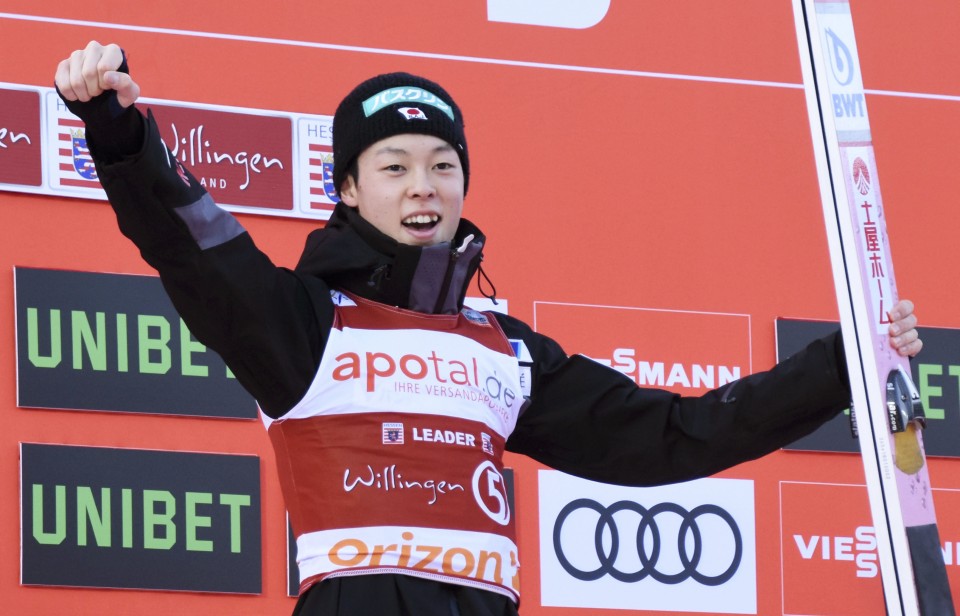 Despite struggling in the practice round in the men's large hill individual event on Sunday, Kobayashi jumped 146.0 meters in the first round then tied Germany's Richard Freitag with 144.0 meters in the second round for a total of 274.4 points.

"The conditions were tough but I was helped by good wind conditions. Both jumps were good," Kobayashi said.

"I want to continue making my best jumps," he said.

It was the 16th time Kobayashi finished on the podium this season. According to the International Ski Federation, Kobayashi surpassed Kazuyoshi Funaki, who achieved 15 podium finishes in the 1998-1999 season, for the best record by a Japanese.

The 22-year-old Kobayashi is looking to become the first Japanese man to be crowned overall World Cup champion and can seal the title as early as March 10 in his next event, which takes place after the world championships.

He has a clear lead over Kamil Stoch (1,145) and Stefan Kraft (1,017) in the World Cup standings with 1,620 points so far, with six individual competitions left this season.

The FIS Nordic World Ski Championships will be held Feb. 20 through March 3 in Seefeld, Austria.