As Japan cruised to a 48-point win over Qatar on Sunday, there was a turning of the tide for a sport which has in recent times seen the lowest of lows in this country.

The win in Doha confirmed Japan's place in the World Cup, held in China between Aug. 31 to Sept. 15. But more importantly, it showed the team, especially when its up-and-coming U.S.-based players are available, must be considered one of Asia's emerging powers.

And Japanese basketball's hierarchy will be breathing a huge sigh of relief because it both means the team will have an opportunity to size itself up against the world's best in China, but also will give FIBA, the sport's governing body, a tough time denying it a place at the Tokyo Olympics when it makes the big decision in March.

For those administrators, the relief will be all the stronger because as recently as 2015 Japan was in the wilderness, having been banned by FIBA for its organizational failings in managing the local federation, the local league and a plan for the future of the game here.

"This qualification for the World Cup, and (possibly for) the Olympic Games, is big for Japan basketball," said national team head coach Julio Lamas in the post-game press conference in Doha on Sunday.

"For the promotion of Japan basketball, for the sport, (the) opportunity for the young players to play two times against that kind of competition -- to play at the World Cup and Olympic Games -- is huge and a huge opportunity to try to work to get to the next level," he said. 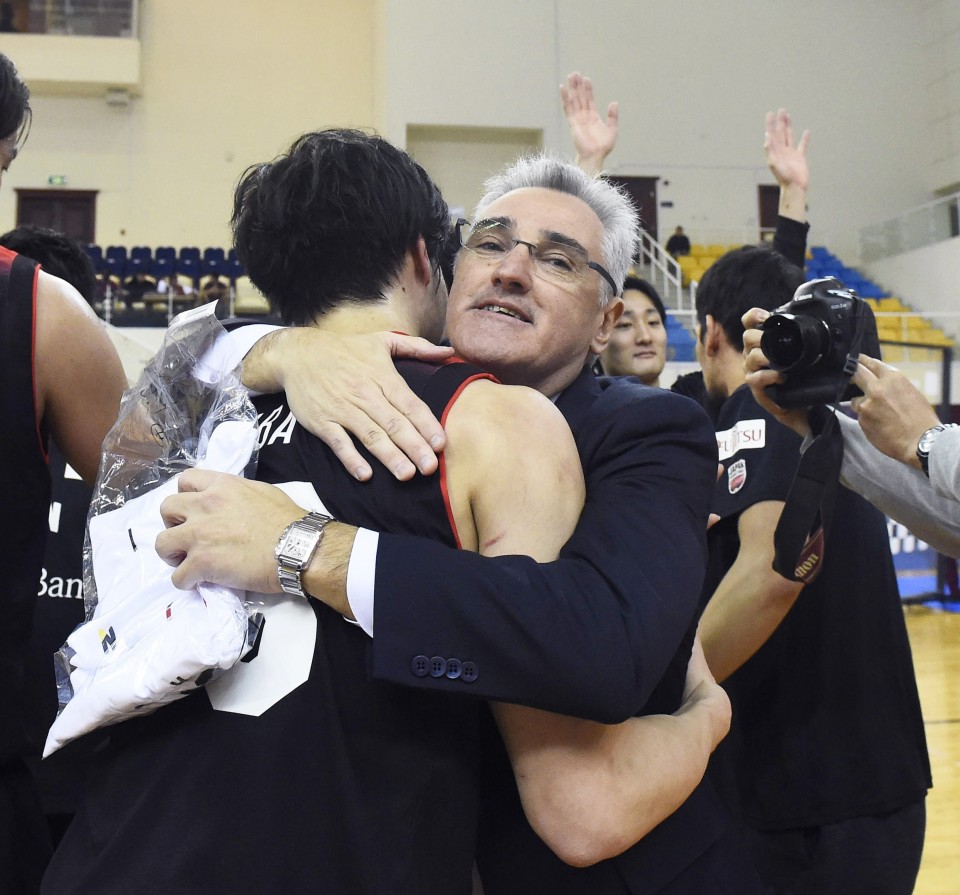 For the experienced Lamas, who guided Argentina's golden generation to a bronze as an assistant coach at the 2008 Olympics before taking the reins before the 2012 Games, it was not so long ago that he was staring down disaster.

In June 2018, four games into the qualification competition, Japan was winless and looking like it might make a first-round exit.

But then came a much-needed talent injection.

The impact was immediate, with Japan getting a win against an Australia team ranked in the world's top-10, a formidable opponent even without its platoon of NBA talent.

Hachimura, 21-years-old and one of Japan's great future hopes, provided a much-needed physicality and athleticism, and the 33-year-old Fazekas brought experience, stretch shooting and poise as Japan snuck a 79-78 win in Chiba to keep the team's qualification hopes dangling by a thread.

What followed was a string of seven more wins that not even the most optimistic Akatsuki Five fan could have imagined possible.

"We were one game away from not getting to the second round," Fazekas reflected after the Qatar win. "We beat Australia and that was what really got the ball started."

"When Rui and I showed up, I kind of told the team we are here to win. I know we have lost four in a row, but we have two different starters now so let's go out there and win."

Fazekas said the must-win game against Australia, and another huge, 40-point demolition of Taiwan, instilled a new belief in the squad, and when it scraped into the second round behind the Boomers and Philippines, it was game on.

"I think it is just confidence, I think in those first four games the guys just were not very confident," said Fazekas.

"Japanese basketball was kind of in a rut, never really qualifying, never winning. I just tried to bring my kind of mindset in and just tell everyone, 'Look, we may be underdogs most of the time, but underdogs (often) win.'"

At just 167 centimeters tall in a game of giants, Japanese point guard Yuki Togashi knows a bit about being an underdog, but he said the injection of the likes of Fazekas, Hachimura and Yuta Watanabe made the whole team stand tall.

"We had some top-level players come in and the team's consciousness changed," said Togashi. 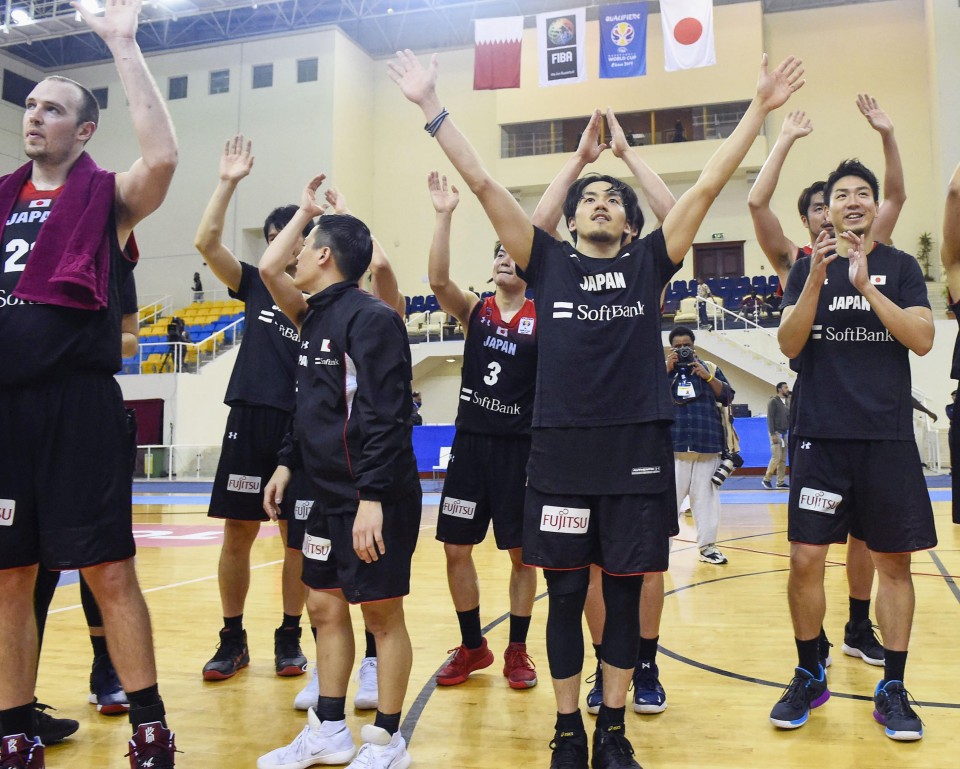 Before going back to the United States to star for his college outfit Gonzaga, Hachimura played four games in total, all wins, the skilled power forward averaging 21.5 points and six boards per game.

In two of those wins, Hachimura was joined by Japan's other ascendant young pro, Watanabe, the duo combining to give Japan a new look on both ends of the court.

Like Hachimura, Watanabe departed after making his mark -- 17.5 points per game combined with a long, disruptive presence on defense -- and has gone on to bigger things, joining the Memphis Grizzlies to become only the second Japanese player to get minutes in the NBA, and many more with its minor-league sibling the Memphis Hustle.

Although the success of Hachimura and Watanabe was music to Lamas' ears, they were of no further help in qualifying as both departed to chase their dreams Stateside.

So, Japan had to rely on its B League-based talent, with the ever-reliable Makoto Hiejima particularly showing his ability to be a basketball chameleon, playing whatever role his team needed on a given night.

The former B League MVP ended qualifying having averaged almost 14 points per game while shooting at a 55.6 percent clip from behind the 3-point line, fourth best among all players. He also averaged a team-high 3.8 assists per contest and showed up when it counted, going for 24 points, six assists and four boards against Iran in the vital penultimate qualifier.

With Hiejima, promising young swingman Yudai Baba and some of the old heads -- including veteran center Joji Takeuchi, the only player in the current squad to play at the 2006 worlds, the most recent of Japan's four previous appearances -- Japan showed it can compete.

Fazekas noted the impact that the gained experience and increased profile of Japan's qualification could have on domestic basketball.

"It is huge. Obviously, the B League is in its third year and is heading in the right direction, it just keeps getting bigger every year and something like this just kind of helps catapult it," said Fazekas, who plays for the Kawasaki Brave Thunders. "The sky is the limit for the B League."

Baba, one of the local league's young stars in his role with Alvark Tokyo, concurred, saying his team "wanted to show how Japan has changed, how it tries hard and takes the initiative."

Fazekas wants the good times to continue in his adopted homeland, and he is in for the whole ride.

"It is hard to put into words, you know, I have never had a chance to play in anything like this," he beamed during the press conference.

"Coach Lamas has told me what a special experience it is and how much fun the World Cup is going to be, and for us to get there, it is just great for the country...It is just so much fun and I just think that basketball just keeps getting bigger and bigger in Japan."