"A key to the partnership ties between our two countries is contributing to the region's peace and prosperity," Abe told Vietnam News Agency General Director Nguyen Duc Loi in an exclusive interview in Tokyo, where he is on a working visit. 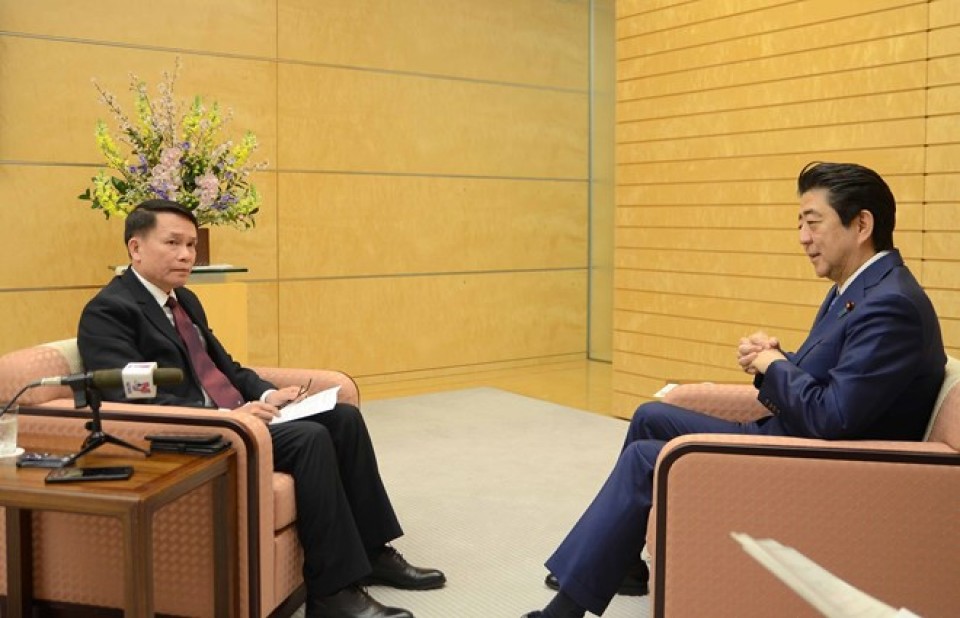 Since 2014, Japan and Vietnam have been pursuing an "Extensive Strategic Partnership for Peace and Prosperity in Asia," under which they have been cooperating on economic, political and security issues, as well as in regional and international fora, while also promoting cultural and people-to-people exchanges.

"I really want to further deepen the relationship between our two countries," Abe said, according to a transcript. "I want our two countries to work together to solve regional and global issues."

With that in mind, Abe noted that he has invited Vietnamese Prime Minister Nguyen Xuan Phuc to attend the Group of 20 summit to be held in Osaka in late June as a guest.

Abe said a stable and peaceful Indo-Pacific region is the foundation for ensuring peace and prosperity.

Japan and Vietnam should thus join hands to create a "free and open" Indo-Pacific region, he said, while also mentioning the importance of freedom of navigation and overflight -- an apparent allusion to China's vast territorial claims in the South China Sea that are disputed by Vietnam and other countries.

Abe hailed the success of Vietnam's "doi moi" reform policy over the last three decades, crediting it for the country's impressive economic development.

In the eyes of the Japanese people, Abe said, Vietnam is an industrious, smart and patient nation with warm-hearted people, many of whom have become increasingly familiar with Japanese language and culture.

Noting there are now some 300,000 Vietnamese residing in Japan, the prime minister expressed hope that more skilled workers will come to work in his country after its new policy to receive foreign workers takes effect from April 1.