Japan's Hayabusa2 space probe successfully touched down Friday on a distant asteroid, the nation's space agency said, beginning the next phase of a mission aimed at discovering new insights into the origin of life and the evolution of the solar system.

The Japan Aerospace Exploration Agency said it received a signal from Hayabusa2 showing it touched down on the Ryugu asteroid located 340 million kilometers from Earth, although the agency will need a few days before it can confirm whether the first surface samples were collected as planned.

The spacecraft is designed to fire a small projectile when the tip of a cylindrical horn protruding from its body touches Ryugu's rugged surface to collect fragments.

"Today, a hand of humankind has reached a new starlet," Yuichi Tsuda, a JAXA associate professor and the Hayabusa2 project manager, said at a press conference. "The touchdown was in the best condition and as desired."

The space agency also confirmed Hayabusa2 has fired a projectile, and already moved away from the surface.

The C-type asteroid is believed to contain organic substances and water with remnants of the primitive solar system.

To avoid colliding with large, rocky formations on the asteroid's surface, a landing area of about 6 meters in diameter was selected instead of the originally planned area of 100 meters in diameter, making navigation of the probe more difficult than initially expected, according to JAXA. 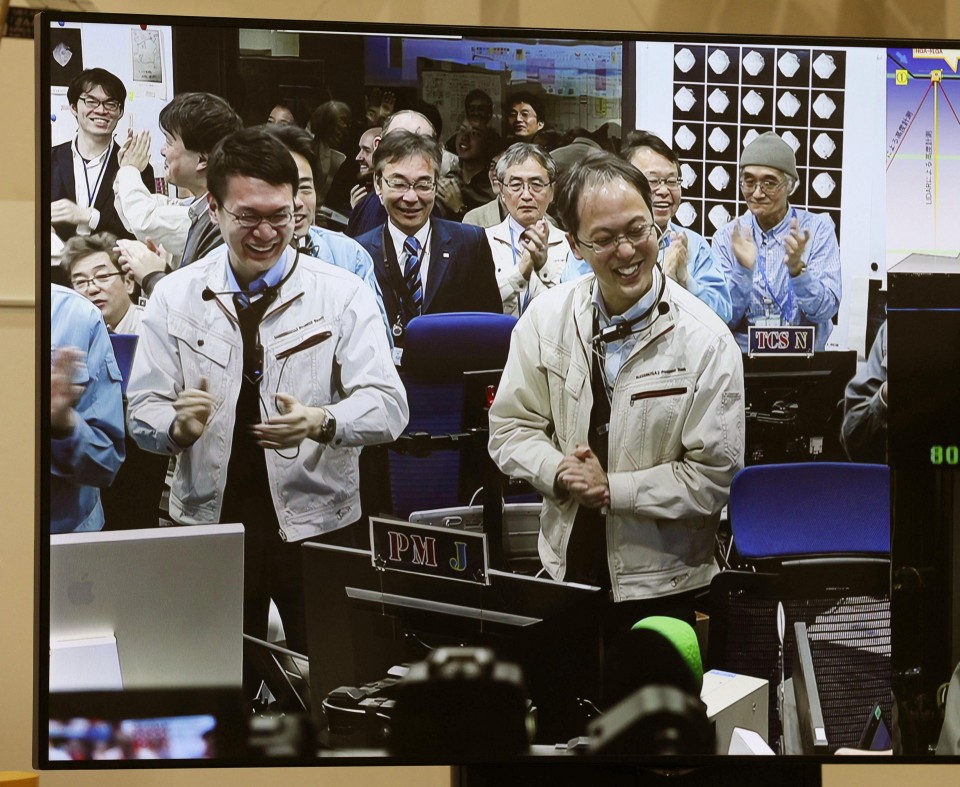 (A monitor at a JAXA facility in Sagamihara, Kanagawa Prefecture, shows agency employees reacting after receiving data from the Hayabusa2.)

About 50 members of the operation team and some 20 others who had monitored the developments Friday morning at the JAXA control room in Sagamihara, near Tokyo, erupted in joy when the signals confirming that Hayabusa2 had landed and fired a projectile arrived, pumping their fists in triumph, clapping and hugging.

About 200 members of the public following proceedings in Sagamihara broke into cheers and applause after learning that the probe's maneuver was successful.

"It looked too easy, but in a good way. I hope (Hayabusa2) will complete the remainder of its mission and return safe and sound," said Mayu Fukatsu, a 39-year-old programmer from Fussa, western Tokyo.

Science minister Masahiko Shibayama welcomed the Hayabusa2's achievement at a press conference, saying, it was "very significant that the excellence of Japanese technology was demonstrated."

Jim Bridenstine, the administrator of the U.S. National Aeronautics and Space Administration, expressed in a Twitter post his congratulations on a Hayabusa2 "successful touchdown and retrieval."

NASA's probe OSIRIS-REx is in the middle of a mission to collect samples from another asteroid, Bennu, and scheduled to return to Earth in 2023. "NASA is looking forward to comparing data and sharing samples with Japan," Bridenstine said. 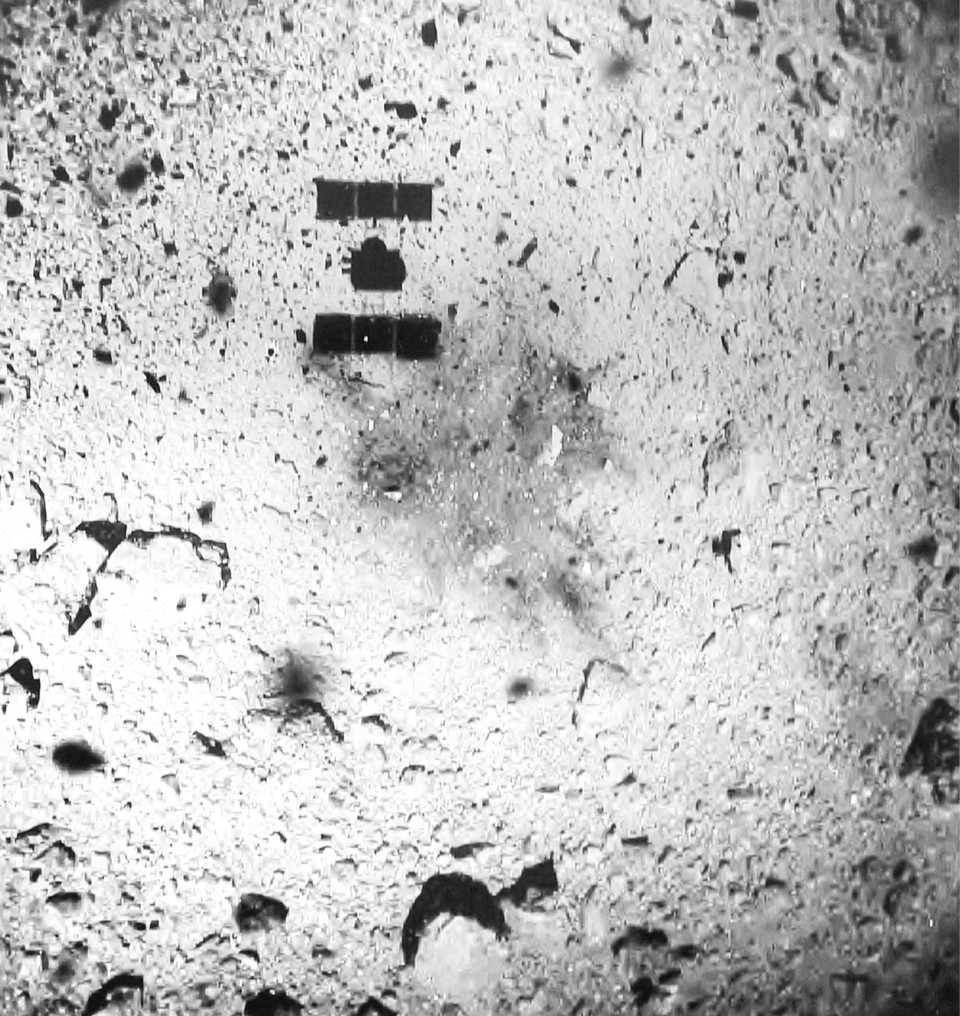 (A JAXA monitor shows the Hayabusa2 space probe -- the black, off-center object in the image -- after it landed on the Ryugu asteroid)

Brian May, guitarist of the famed British rock band Queen and who has a doctorate in astrophysics, has been following the probe's mission progress and congratulated Hayabusa2's touchdown in a Twitter post.

"Hurrah! Brilliant success in touchdown on RYUGU!!! Subarashi des," he wrote, using a Japanese expression meaning "It is wonderful."

The Hayabusa2 arrived in the vicinity of the asteroid in June after traveling 3.2 billion km on an elliptical orbit around the Sun for more than three years. The probe is due to return to Earth at the end of next year after making two more touchdowns by June on the asteroid.

JAXA had postponed the initial touchdown from October due to difficulty in finding a good landing site on the asteroid, which turned out to be rougher than expected.

The diamond-shaped Ryugu asteroid, with an estimated diameter of about 900 meters, travels around the Sun once every 16 months, passing near the orbits of Earth and Mars.

The asteroid is named after an undersea dragon palace in a Japanese fairy tale, where the mythical fisherman Urashima Taro found a treasure chest. Hayabusa, meanwhile, means peregrine falcon in Japanese.

Launched in December 2014 from the Tanegashima Space Center in southwestern Japan, the roughly 600-kilogram Hayabusa2 experienced a trouble-free journey to its destination.

Last year, Hayabusa2 successfully released three tiny rovers, each of which is designed to roam the surface of Ryugu to conduct probes.

The agency is hoping to produce an outcome surpassing that of the original Hayabusa asteroid probe, which collected the first-ever samples from an asteroid in space. The first Hayabusa was launched in 2003 and delivered the materials it collected from the asteroid Itokawa back to Earth in 2010.

It landed twice on Itokawa about 300 million km from Earth, having survived a series of technological problems. It failed to deploy its projectile but managed to return with some asteroid particles that became lodged on the probe when it touched down on the surface.

Asteroids such as Ryugu and Itokawa are believed to be remains of debris that failed to become planets when the solar system was established 4.6 billion years ago. They have attracted researchers' attention, with some experts saying asteroids that collided with the Earth are responsible for bringing the building blocks of life.