The Defense Ministry concluded Monday that South Korea's denial of an alleged radar lock on a Japanese patrol plane is "baseless," saying it cannot continue bilateral defense talks on the incident.

As the two nations have clashed over whether a fire-control radar was directed by a South Korean Navy destroyer at a Japanese Self-Defense Forces patrol plane over the Sea of Japan in December, the ministry released a 20-second clip of radar detection audio to prove its claim.

The announcement came as South Korea rejected Japan's proposal to carry out an "objective and neutral" probe to identify what happened by sharing what each other views as evidence, the ministry said in its "final" view on the Dec. 20 incident. 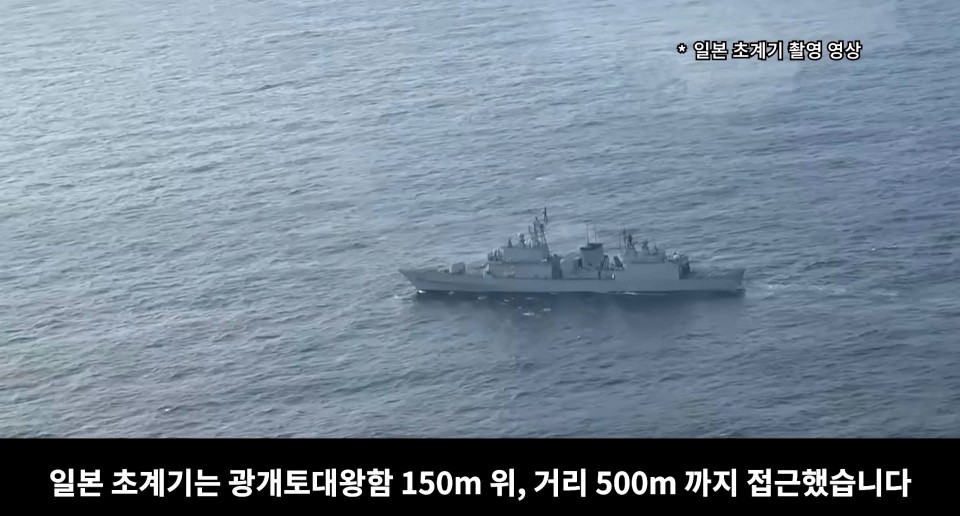 (Screenshot with subtitle that reads: A Japanese patrol aircraft (in circle) flew into the area at a low altitude as a humanitarian rescue operation was under way)

"It is unlikely that the truth will ever be made clear even if working-level meetings were to continue," the ministry said, calling on South Korea to prevent a recurrence of similar incidents.

South Korea, for its part, expressed "deep regrets" over Japan's decision to halt the bilateral talks.

The standoff added to tensions between the two countries as their relations have been deteriorating since South Korea's top court recently ordered Japanese firms to compensate for wartime labor.

The ministry posted on its website the high-pitch sound recorded by the SDF plane, saying it is typical of a fire-control radar.

As South Korea has denied the allegation by saying the warship was merely using radar to search for a drifting North Korean fishing boat, the ministry also released another audio clip of sound that can be recorded when search radar is detected, for comparison.

Patrol planes normally detect radio waves of radars in the form of sounds, according to the ministry.

The release came on top of a roughly 13-minute video clip that the ministry released on Dec. 28. The footage showed one of the crew members saying the plane's systems picked up "extremely strong" sounds he says are due to the fire-control radar of the ship.

South Korea, which has also released its own video clip in multiple languages, has maintained the SDF surveillance plane flew menacingly low toward the ship, demanding an apology from Japan.

Japan denied the claim, saying that the plane was flying, at its closest, at an altitude of around 150 meters and some 500 meters away from the ship.

The two countries are also at odds over why the South Korean ship did not respond to the Japanese plane's call.

Seoul has claimed that communication was poor and the destroyer did not respond because it believed the call was directed to South Korean coast guard vessels.

But the Japanese ministry said the call -- "Korean South Naval ship, hull number 971, this is Japan Navy" -- can be clearly heard in the footage released by South Korea.

Despite the latest spat, the ministry also said that bilateral and trilateral defense cooperation with the United States is extremely important and "indispensable" in tackling the North Korean missile and nuclear threat.