Shigeru Honda realizes the male players at this year's Rugby World Cup will garner the headlines and make the big bucks, but he also believes that by hosting the tournament there is a great opportunity to get more Japanese women involved in the sport.

Honda, a 61-year-old science teacher, has coached high school rugby teams in central Japan's Shizuoka Prefecture for more than three decades, and now he considers developing the talents of female players his calling.

"I started coaching girls as a way to kill time, but the number of players increased gradually," Honda said. "I've decided to push back my retirement to watch the girls improve since we started to get on track." 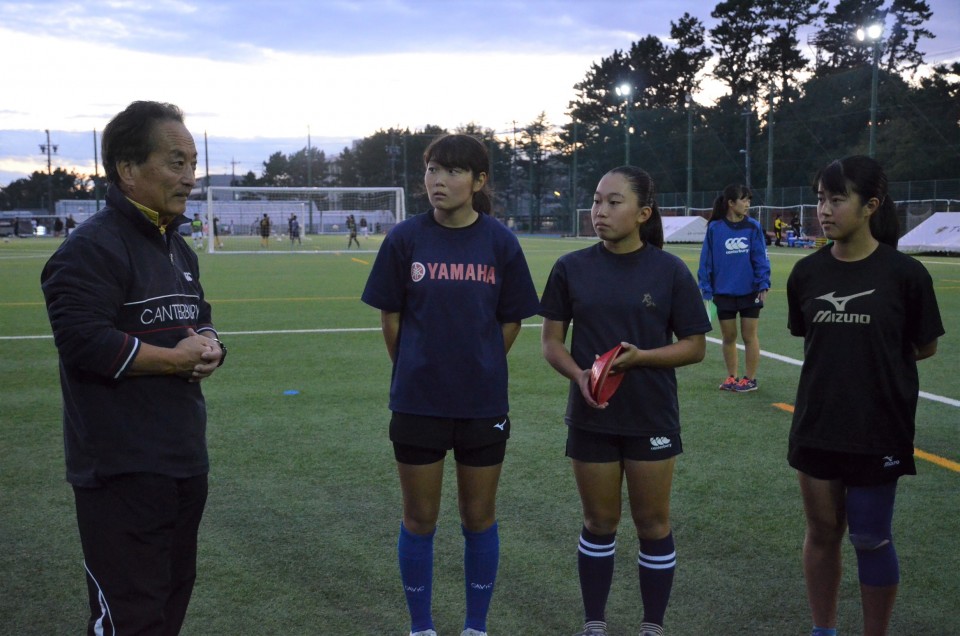 Coaching at Tokai University Shizuoka Shoyo high school in the prefecture's capital city, Honda initially found it a difficult task to recruit female players and fans. But, now, he thinks the situation has changed, and he has no intention of letting that opportunity slip.

With the Rugby World Cup approaching, local officials are zeroing in on women as key to the success of the tournament -- and hoping new female fans can help fill the stands of the tournament's second-largest stadium.

One reason Shizuoka put its hand up to host the World Cup is to encourage people to enjoy sports more, said Kenji Takakura, a member of the prefecture's preparation committee.

"Rugby doesn't have a huge player demographic here," Takakura said. "But if it gains steam and people become interested in the sport, we hope it will end up having a lasting effect of increasing the number of sports lovers in Shizuoka." 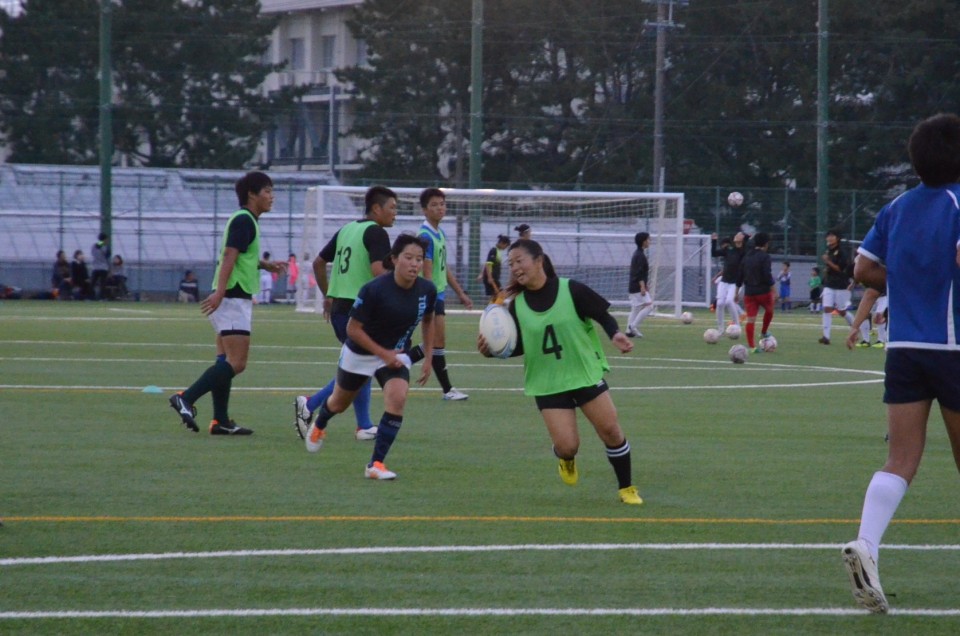 Local university students have resorted to creative ways such as compiling videos, brochures and making baked sweets to promote the attractions of the sport and to increase female rugby fanatics, who they refer to as "ru-girl" or rugby girls.

Rugby is usually not the first sporting choice of female high school students nationwide. There are only around 800 female players between the ages of 15 and 17 in Japan, while the number of male players exceeds 24,000, according to the Japan Rugby Football Union.

But Tokai University Shoyo high school has 18 players, both experienced and beginners, enough to form its own team.

Whistle in mouth, Honda passes on to his team the essence of rugby -- from how to pass the ball to how to communicate with each other on the pitch. Training is held six days per week and on weekdays it finishes just in time for the players to make it to the bus that leaves at 7:30 p.m.

Honda said some of his players will take part in the World Cup, acting as ball girls at Shizuoka Stadium Ecopa in the city of Fukuroi. Japan will play Ireland there on Sept. 28. South Africa face Italy on Oct. 4, Scotland take on Russia on Oct. 9 and Australia meet Georgia on Oct. 11.

"If you want to watch the match, it may be better on TV, but enjoying the atmosphere at the venue means so much more," Honda said. "I hope by watching the matches, female players will be more motivated to train."

But his hopes do not end there. Honda says he wants female players and fans to become advocates for the game.

"When they become mothers, I want them to tell their children, whether they are boys or girls, to play rugby. I think that's one way to spread the sport," he said.

Honda's team of girls started back in 2011 when a student asked him if she could play rugby, despite the club only having male members back then.

But with word of mouth and persuasion, it has grown into a team to which students from other prefectures transfer because it is difficult to find an all-girls team at high-school level.

Kanna Doi, a third-year student, transferred from an Osaka Prefecture school, where she was the only female player in a 110-member rugby club.

She did not get any game time in matches with the boys and struggled to keep up with the stronger and faster players.

"I continued playing with the boys thinking I can become a better player if I endured. But it was harder than I expected," the 18-year-old said. "I get to play in matches here, and I'm thankful that we are all the same gender -- we can say anything we want to each other without hesitation."

"I understand girls my age think rugby is a dangerous sport. And It can be dangerous at times, but there's much more to it than that. I want people to know the fun side of it," said Doi, who will pursue her passion for the sport after graduation at a sports university.

Takakura says the fans of Yamaha Jubilo, a Top League team in Iwata city, Shizuoka, are mostly middle-aged men. He thinks getting female involvement is crucial because women tend to share their interests with family and friends. 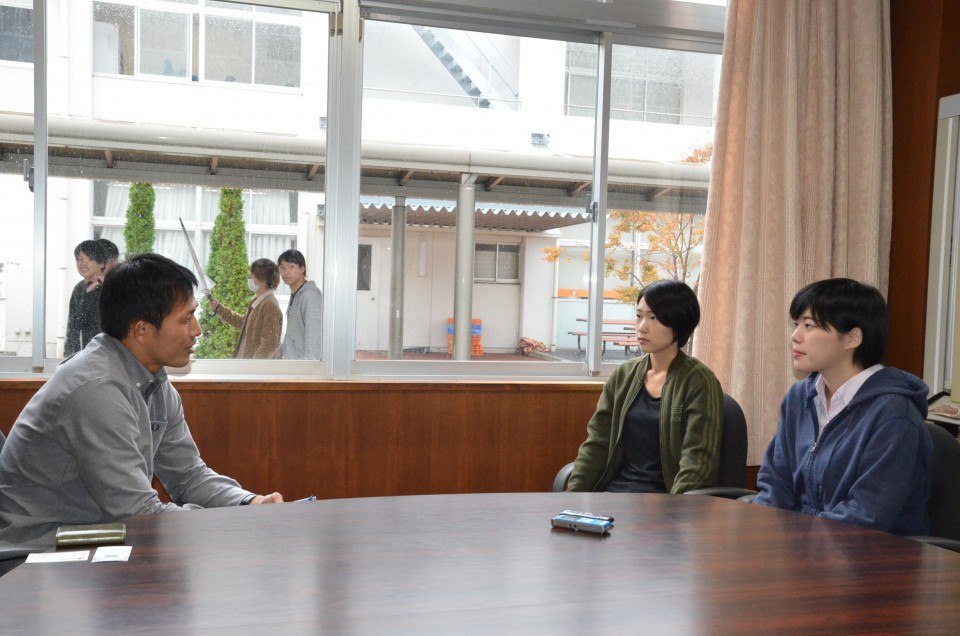 (Female students interview Hirotoki Onozawa, a former member of Japan's national rugby team, for a brochure they are compiling ahead of the Rugby World Cup.)

Former Japan men's international Hirotoki Onozawa, second on the list of all-time cap winners for the Brave Blossoms, says it is important for the sport to transition from something that only die-hard fans enjoy, to something popular among both men and women, young and old.

"The sport is having a difficult time attracting female fans partly because of a misconception that the rules are difficult," the Shizuoka-native said. "There needs to be something that triggers more people to get to know the sport."

University students, who knew little about the sport before, are up to the task. They started promoting the attractions -- both on and off the field -- to increase the number of ru-girls in the prefecture.

Two female students at Shizuoka Sangyo University interviewed Onozawa in November for a brochure they are compiling. In the previous edition that the students made, they introduced the rules of the sport and published suggestions about fashionable ways to wear a rugby jersey. They also wrote a list of restaurants around the venue.

In the city of Hamamatsu, west of the stadium, students at Shizuoka University of Art and Culture developed short videos starring a Yamaha Jubilo player and female students. 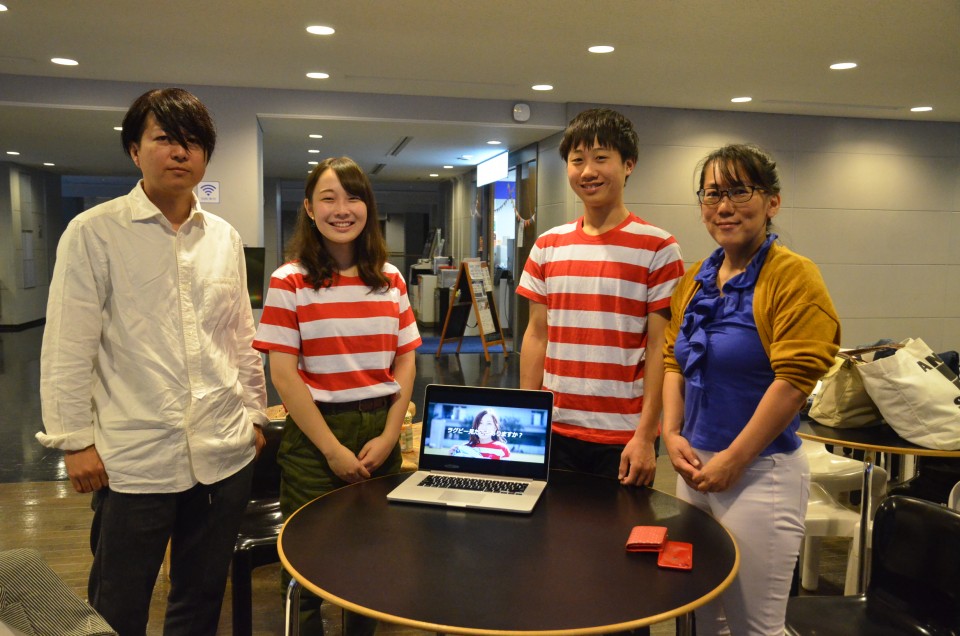 (Haruka Nishino, 2nd from left, and members of a group that made a promotional video for the Rugby World Cup)

In a 15-second video, which was screened on a video billboard in front of Hamamatsu station, 20-year-old student Haruka Nishino asked a Yamaha Jubilo player the attractions of rugby. In another one, students asked female students how their impressions about rugby changed after showing them footage of the players on the field.

"To be honest, I didn't know about the sport at all. But I fell in love with rugby when I was looking for ways to promote it to women my age," said Nishino, who made the video with her classmates. "Talking with the players made me love the sport even more. I'm looking forward to the World Cup." 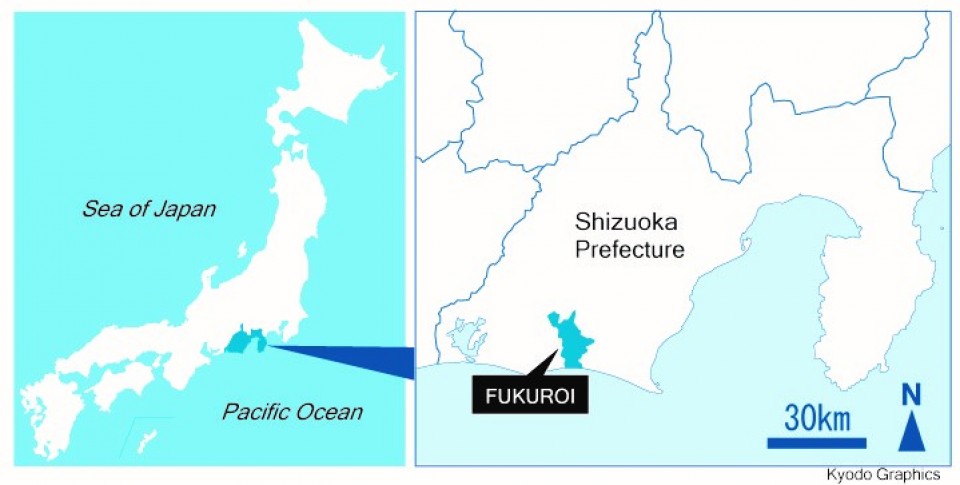