The 34-year-old Mongolian wrapped up his triumph with his 13th victory, beating No. 9 maegashira Endo (10-5) for the 10th time in 16th career bouts. Tamawashi had entered the day with a one-win lead over 22-year-old Takakeisho, who had won his maiden championship in November.

Tamawashi made quick work of Endo, receiving his charge, pushing him up, throwing him off balance with a couple of full-blooded shoves and then casting him down. 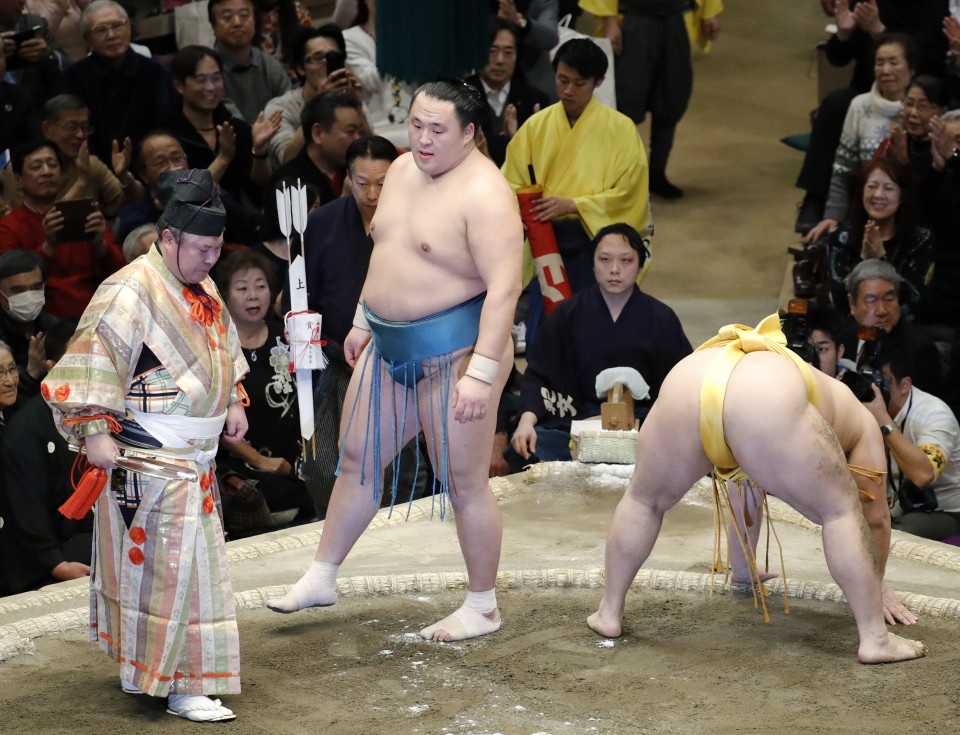 The oldest wrestler to win his first championship since sumo went to six grand tournaments a year in 1958 was his compatriot Kyokutenho, who secured his lone title as a No. 7 maegashira in May 2012 as a 37-year-old. With the title in his hands, Tamawashi sat by ringside, where we continually wiped at his eyes while the final bouts were fought out.

"My first thoughts were of gratitude toward all those who have supported me," Tamawashi said. "For so long, I've wanted to tell my stablemaster and his wife this wonderful news, and now at last I can do it."

"It's a long slog. I was able to concentrate, but it was long. I'm glad I was able to do that and enjoy this feeling I have now."

The victory was cause for double celebration as Tamawashi's wife gave birth to a son earlier in the day.

"This is the greatest," he said.

With a second straight championship out of reach, Takakeisho (11-4) faced ozeki Goeido (9-6) in the tournament's final bout. He was run out of the ring in a heartbeat, carried out by the ozeki's charge in 1.9 seconds.

Although Takakeisho met one standard for ozeki promotion, 33 wins over three grand tournaments, his poor performance on the final day, and his 9-6 record in September have put his promotion on hold.

"I want to do my best (in the next tournament)," he said. "Fifteen days is long. I knew that already, but I still have many lessons to learn."

Komusubi Mitakeumi earned a "shukun-sho" Outstanding Performance prize for having defeated all three yokozuna in the tournament. He finished with an 8-4-3 record. It was the first time since the "sansho" three-prize system was established in 1947 that a wrestler who missed bouts due to injury received one of the awards.

Although he limped visibly except in the ring, the komusubi handed yokozuna Hakuho his first loss of the tournament on Day 11, opening the door for Tamawashi and Takakeisho to battle for the championship.

Hakuho withdrew after suffering his third straight loss on Day 13, leaving the tournament without a single wrestler at the sport's highest rank. Fellow Mongolian grand champion Kakuryu pulled out due to injury and Japanese yokozuna Kisenosato closed the curtain on his career earlier in the tournament.

Tamawashi won a "kanto-sho" Fighting Spirit prize and an outstanding performance prize for the victory, while Takakeisho was awarded a "gino-sho" Technique prize.

Ozeki Takayasu finished the tournament with a 9-6 record by forcing out Brazilian No. 8 maegashira Kaisei (10-5).