In his New Year's address, however, Kim urged the United States to ease sanctions and warned that North Korea may seek a "new path" if Washington maintains pressure on Pyongyang, suggesting that it may return to a policy of pursuing weapons of mass destruction.

"We will not make, test, use and spread" nuclear weapons ahead, Kim said, adding, "I am always ready to have face-to-face talks with the U.S. president and will make efforts to reap the fruit that must be welcomed by the international community."

Although he did not mention how to deal with missiles and nuclear weapons Pyongyang owns now, Kim -- who delivered New Year's address for the seventh straight year -- sent a conciliatory message to Trump as he is keen to obtain security guarantees from Washington, analysts say.

But Kim added that "if the United States does not fulfill a promise," North Korea "will be forced to consider a new path to protect the country's autonomy and supreme interests and to attain peace and stability on the Korean Peninsula."

At their historic meeting in Singapore on June 12, Kim and Trump agreed that the United States will provide security guarantees to North Korea in exchange for its "complete denuclearization." 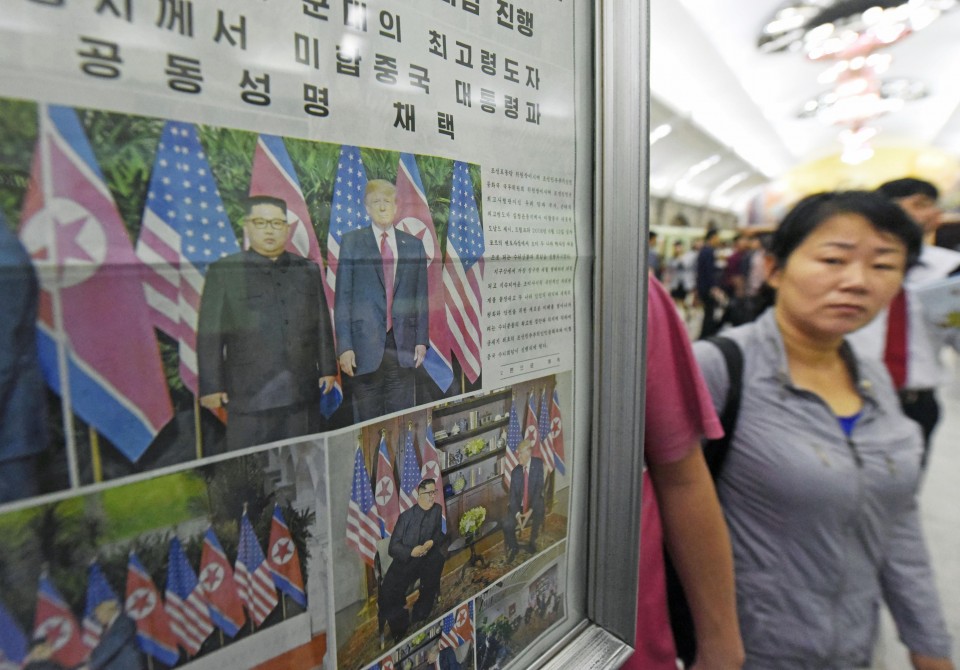 Since then, negotiations have been in a stalemate amid the Trump administration's skepticism about North Korea's resolve to give up nuclear weapons, with Pyongyang apparently trying to gain concessions by offering denuclearization in a phased manner.

On Tuesday, Kim also called on the United States and the South to continue to suspend their joint military drills, emphasizing the importance of promoting multilateral talks on officially ending the Korean War, which concluded in an armistice.

Kim, meanwhile, promised in his nationally televised New Year's address that he will build up the economy, which analysts say is stagnant against a backdrop of international sanctions aimed at curbing North Korea's development of nuclear weapons and missiles.

In his previous New Year's speech, Kim extended an olive branch to South Korea, saying he would prepare for his country's participation in the Pyeongchang Winter Olympics hosted by the South in February 2018.

Later in the year, Kim held summit talks with Chinese President Xi Jinping, South Korean President Moon Jae In as well as Trump, and the North's leader pledged to achieve complete denuclearization of the Korean Peninsula.

In April, North Korea's ruling party led by Kim declared that the nation will "concentrate all efforts on building a powerful socialist economy" and will "discontinue" nuclear and intercontinental ballistic missile tests.

Washington and Pyongyang have no diplomatic relations and remain technically at war after the 1950-1953 Korean War ended in a cease-fire.

In the war, U.S.-led multinational forces fought alongside South Korea against the North, backed by China and the Soviet Union. Hostilities ceased with an armistice agreement signed in July 1953 by the U.N. Command, North Korea's military and Chinese armed forces.

Kim and Trump are expected to hold a second summit in early 2019, but North Korea and the United States have so far shown little sign of making arrangements for the meeting.

The New Year's speech by Kim, who became North Korea's supreme leader in the wake of the death of his father Kim Jong Il in 2011, follows the leadership style of his grandfather and state founder Kim Il Sung rather than Kim Jong Il, who rarely spoke in public.

Kim, wearing a black Western-style suit with a tie, made his speech on Tuesday while sitting on a sofa in front of national and ruling party flags.