Ideas are shifting about what constitutes the nebulously named concept of "peace education" in Nagasaki, the second city ever to suffer an atomic attack, as educators look to create a new approach to learning about their home city's difficult history.

Educators say too much emphasis has been placed on relaying the brutal reality of A-bomb strikes to future generations, resulting in students forming a myopic view of the incidents rather than questioning and debating everything that culminated in the nuclear attacks near the end of World War II. 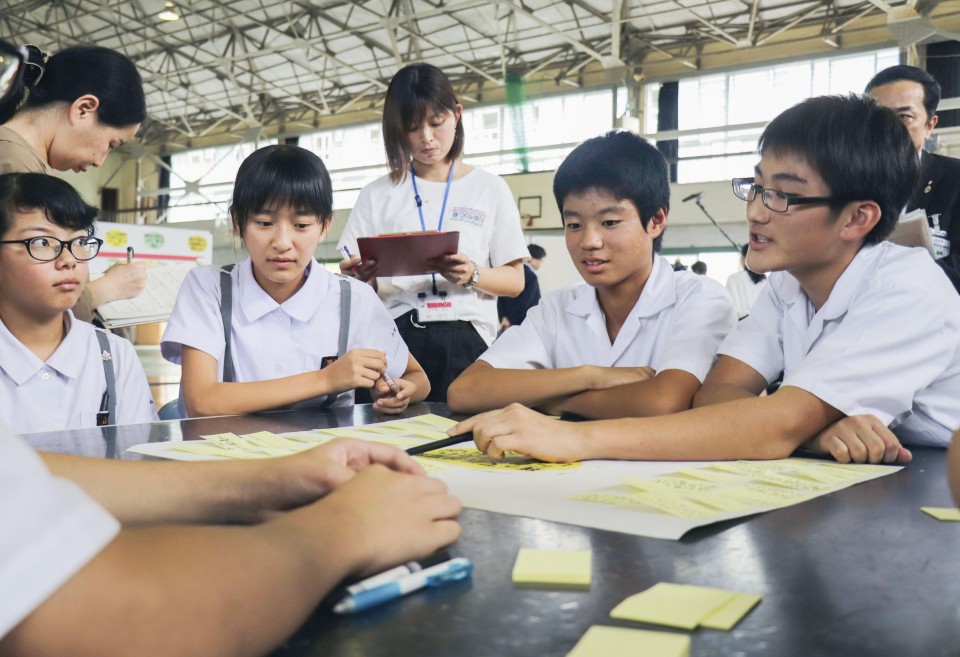 The program of so-called peace education has aimed to inform and educate children about war, but has used traditional, textbook-driven teaching techniques that may have failed to give students an understanding of the A-bomb strikes in the wider context of the war.

The key word is dialogue, educators say -- conducting thought experiments that question the meaning of peace and war by getting participating children to react, express various opinions, and talk about less-considered viewpoints.

This was an actual question posed by a Japanese teacher in a workshop at Yamazato Junior High School in Nagasaki. True accounts of scientists involved in developing the nuclear bombs as part of the U.S.-led Manhattan Project during WWII were used to make the activities feel real.

Some argued that they could not assist in a program that would result in the taking of so many lives, while others made the case for such weapons of mass destruction being necessary to bring an early end to war.

Some students argued that the scientist's choices might have been limited.

"I was completely against it at first, but if you turned this down, your future as a scientist might have been over," said, Ryosuke Ashida, a 15-year-old student who took part in the experiment, his reaction perhaps reflecting how divorced younger generations have become from the serious reality of atomic weapons.

Masahiro Yamakawa, 48, chief director in charge of the Nagasaki Board of Education's school division, said, "It was a first step in getting students to talk about peace in their own words."

Revisions in the education program were launched after a survey was conducted among third-year junior high school students in the city in 2016. As many as 94 percent of respondents knew Aug. 9, 1945, was the date the bomb was dropped on Nagasaki, but only 72 percent knew the correct answer for Hiroshima, 14 points lower than a similar survey conducted in 1991.

"Because there has been special emphasis given to relaying the experiences of Nagasaki atomic bomb victims, there has been a lack of study from a broad perspective," said Yamakawa.

Educational booklets on the topic, with a descriptive tone more textbook in nature, have been substantially revised. More photos and diagrams have been included with the mindset of stirring students' imaginations, educators say.

Students are now required to do "investigative learning," preparing questions in advance of annual lectures by hibakusha, as survivors of the atomic bomb attacks on Hiroshima and Nagasaki are known.

Reiko Hada, 82, a hibakusha from Nagasaki who gives talks on her experience at around 60 schools in and outside Nagasaki Prefecture each year, said, "I felt like there was a passiveness to children in Nagasaki."

So, she admitted to being surprised to see so many students raising their hands to ask questions at elementary schools that have implemented interactive dialogue about the A-bomb attacks.

"I want them to take home what they learn about the atomic bombs and to discuss it with their families and friends," Hada said.

More than 70 years have passed since the dropping of the atomic bombs on the two Japanese cities, and both the teachers and those being taught are from generations that have never had direct contact with war. Schools must continue with trial and error, teachers say.

Shizuka Taniguchi, 53, a teacher in charge of the program at Nagasaki City Mikawa Junior High School, said, "For the children, the war is something that occurred in the distant past. We want them to gain the power to think of it, even a little, as something that is relevant to their life."