South Korea on Friday released a video of an alleged radar lock-on incident involving a Japanese plane and a South Korean warship, repeating its demand that Japan stop "distorting" the truth about the case and apologize for a "menacing" flyby by one of its planes.

The South Korean move marks another twist in a dispute that has pitted two U.S. allies against each other and comes exactly a week after Japan released a video of its own in claiming that a South Korean Navy ship had locked a fire-control radar on a Maritime Self-Defense Force patrol plane over the Sea of Japan. 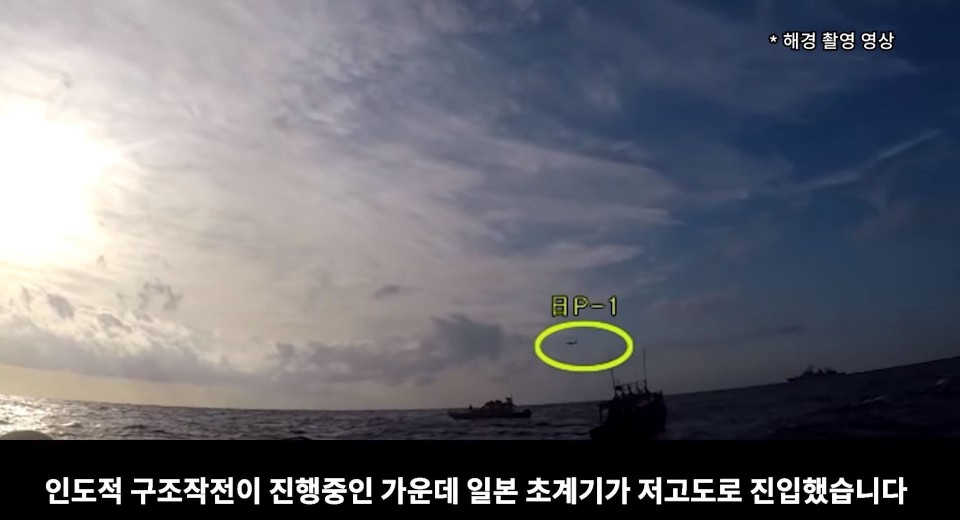 (The subtitle reads: A Japanese patrol aircraft (in circle) flew into the area at a low altitude as a humanitarian rescue operation was under way)

Japan's Defense Ministry rebutted Seoul's claims, saying, "Opinions different from ours can been seen" in them. It also said it will hold talks with its South Korean counterpart toward resolving the row.

The foreign ministers of Japan and South Korea also agreed the same day that the issue needs to be resolved swiftly by their defense authorities.

South Korea has steadfastly denied Japan's claim, saying the destroyer was on the scene on Dec. 20 to rescue a drifting North Korean fishing boat. It said the destroyer used an optical camera but did not direct its radar.

The video, posted on video-sharing service YouTube, is 4 minutes and 26 seconds long and summarizes the claims made by Seoul so far. Among the claims is that the MSDF's P-1 surveillance aircraft flew so low that it was threatening to the crew of the ship.

"Japan will have to stop distorting the truth and apologize for a low-altitude flight over our ships that were on a humanitarian rescue mission," Defense Ministry spokeswoman Choi Hyun Soo said in a briefing recorded on Dec. 28 but only released in the video Friday.

The ministry contends in the video that had the radar been locked on the plane, the plane should have taken maneuvers to evade the situation but that instead it approached the warship again, an action it says defied common sense.

"The purpose of today's disclosure is to inform (the public of) the correct facts as distorted truth has reached netizens all over the world after Japan's unilateral release of video footage," Choi said.