A total of 69 foreigners, mainly in their 20s, working as part of Japan's technical intern program died between 2015 and 2017, according to a Justice Ministry tally made available by a main opposition lawmaker on Thursday.

While the ministry has not confirmed the contents, the document states the deaths were due to traffic accidents, illness, suicide or other reasons, but it does not describe the circumstances of all of the cases. 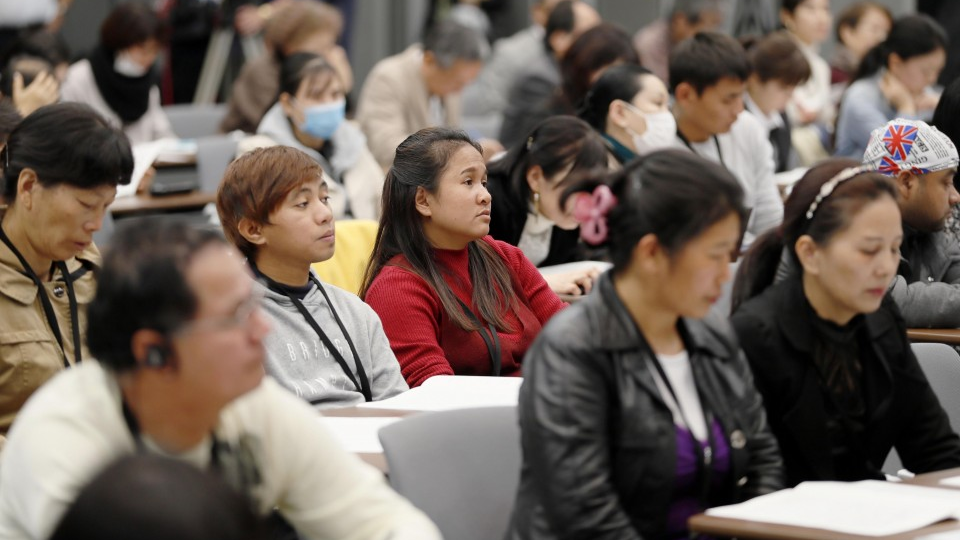 (Foreign technical interns attend a meeting held by a supporters' group in the Diet building on Nov. 21, 2018.)

The document was disclosed by Yoshifu Arita of the Constitutional Democratic Party of Japan during a parliamentary committee session ahead of the likely passage of a controversial bill aimed at bringing more foreign workers to the country.

The document also listed the date of death, nationality, age, sex and occupation of the interns, who were aged from 18 to 44 with nearly 70 percent of them in their 20s.

Six people were recorded as having committed suicide, but there were some cases in which it was unclear if a death was due to an accident or suicide.

For example, there were descriptions such as, "Died from drinking pesticide. The reason for drinking it is unknown," and "Hit by train at railroad crossing. Police are investigating whether it was an accident or suicide."

In many cases there was only a brief description of the cause of death, such as "traffic accident," "drowning," "suicide" and "heart failure."

The head of a nonprofit organization familiar with the situation of technical interns said the government should investigate the matter and disclose the outcome to the public.

"There must be interns who become ill due to long working hours," said Ippei Torii of the Solidarity Network with Migrants Japan.

Prime Minister Shinzo Abe said during the parliamentary committee session in which the document was presented, "I heard about this for the first time now and I don't know what to say. I understand the Justice Ministry will investigate it."

Justice Minister Takashi Yamashita said the ministry has no plan to disclose information on individual cases due to privacy concerns.

Japan introduced the training program for foreigners in 1993 with the aim of transferring skills to developing countries. But the scheme that allows interns to stay in Japan for up to five years has been criticized as a cover for companies to import cheap labor.

With Japan moving to more broadly accept foreign workers to address a serious labor shortage amid the country's aging population and falling birthrate, opposition parties have grilled the government for its already poor management of the technical intern system.

A number of interns have also left their positions due to low wages or poor working conditions.

"There should be no new system without a comprehensive review of the technical intern program," Arita said.

According to government data, about 258,000 foreign interns were working in Japan as of October last year, accounting for about 20 percent of the total number of foreigners working in Japan.