Robert Kajiwara knew he did not have much time to act before construction work began for the controversial relocation of Marine Corps Air Station Futenma within Japan's southern island prefecture of Okinawa.

So the 32-year-old turned to the White House's "We the People" petition website as a last resort, hoping that the U.S. government would intervene in what he sees as the impending destruction of Oura Bay and its ecosystem for the move of the inland military base to the coastal area of Henoko.

"In the days preceding the start of the petition, I was really concerned" about Henoko, Kajiwara told Kyodo News. "I thought, 'We've got to do something. We've got to think of some way we can help.'"

Within 10 days of creating his petition on Dec. 8, it garnered the support of Okinawa Gov. Denny Tamaki and various Japanese celebrities and reached 100,000 signatures, surpassing the requirement for a response by the White House.

As of Thursday, the petition, titled "Stop the landfill of Henoko/Oura Bay until a referendum can be held in Okinawa," has reached 144,000 signatures.

"All I'm asking is President (Donald) Trump order a halt to the construction at Henoko, at least until the referendum is held in February in Okinawa so that the Okinawan people can use their democratic votes to show whether or not they want the base," the petition's description reads. 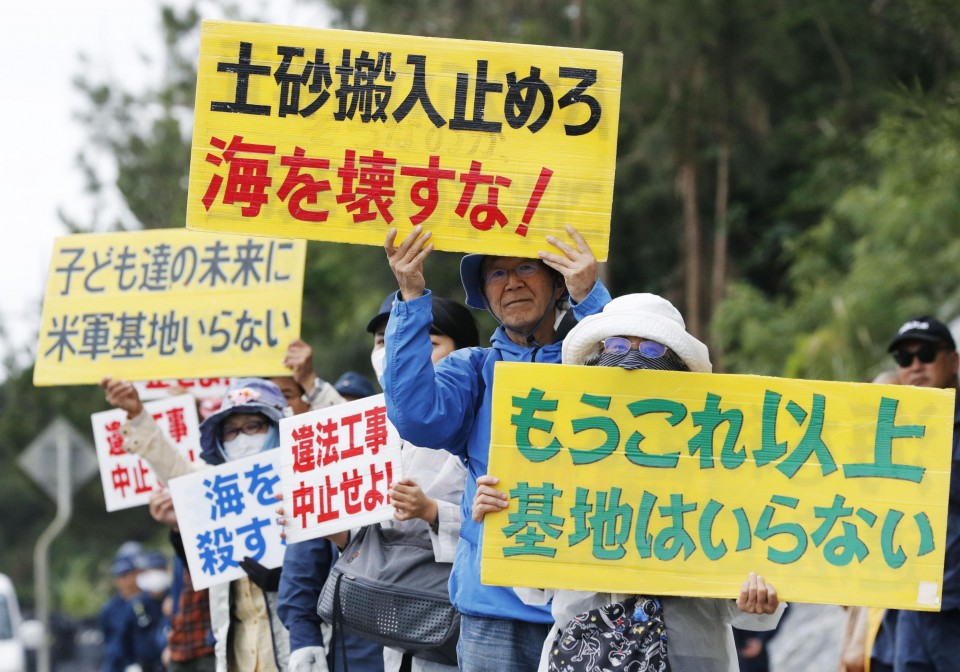 (People protest in the Henoko coastal district of Nago, Okinawa Prefecture, on Dec. 13, 2018, a day before the launch by the Japanese government of full-fledged offshore landfill work for the planned relocation of the Futenma base to the area.)

On Dec. 14, despite widespread Okinawan resistance, the Japanese government began offshore landfill work on the facility, which when completed will replace the Futenma air station currently located in a crowded residential area of Okinawa.

"Even though I'm from Hawaii, I take this issue at Henoko personally," said Kajiwara, who describes himself as Uchinanchu-Hawaiian. Uchinanchu is the term used by Okinawa residents as well as their descendants in Hawaii to refer to themselves. "It's very meaningful to me because it's part of my heritage, part of who I am -- the home of my ancestors."

Kajiwara, who splits his time between Okinawa -- where his mother's family lives -- and Waipahu, Hawaii, has visited Henoko in past years to join air base protesters. He has also worked as an activist for native Hawaiians' rights, he said.

On Tuesday, Kajiwara organized a demonstration outside the Japanese Consulate in Honolulu as part of a National Day of Solidarity for Okinawa, which included events in New York, San Francisco and Seattle.

"We don't want that base relocated in Okinawa prefecture," said Kajiwara. "It's disproportional -- Okinawa contains just 0.6 percent of Japan's land mass, but it contains 70 percent of the U.S. military (facilities). That is not fair at all."

Okinawa was occupied by the United States after World War II and returned to Japanese sovereignty in 1972. Local residents have been frustrated by noise, crime and accidents related to the presence of the U.S. bases in the prefecture.

But Kajiwara has hope that Trump will "do the right thing" and halt the construction until Okinawans vote on the issue on Feb. 24.

"I think (Trump) will respond," he said. "When he sees our request and when he sees the amount of support we've gotten, I think he will see that this is the right thing (to do)."

Though the number of names on the petition has increased steadily over the course of two weeks, Kajiwara worries that the White House will not consider the air base construction to be an American issue, given that the majority of those who signed are Japanese citizens.

"Americans are a huge factor in this," he said. "If we are able to get a lot of Americans to sign and support, the U.S. government will realize that this is a serious issue and we had better act on it."

As he waits for a response from the U.S. government, Kajiwara continues to receive messages of support from Okinawans and those living in mainland Japan.

"As an Uchinanchu-Hawaiian and with my multicultural experience, I hope that I can be of service to the Okinawan people and to help bridge the gap between Okinawa and Hawaii and the continental United States," said Kajiwara.