The game also doubled as the All-Japan Championship final and saw Kobe -- whose only previous league win came in their inaugural season in 2003-2004 -- pick up their 11th national crown and first since 2000-2001. 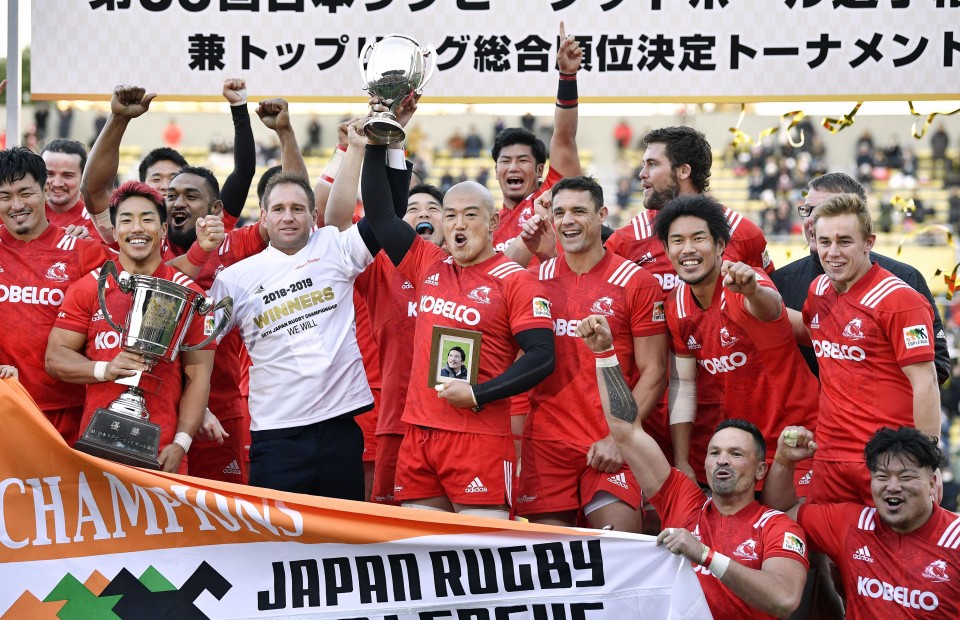 "You get what you prepare for and our preparation was awesome, especially leading into this game," Kobe coach Dave Dillon said.

With players in their 30s leading the way, the Steelers produced a superb display of 15-man rugby against the two-time defending champions, who were full of praise for the Steelers despite ruing their own errors.

"Kobe were very good for the full 80 minutes and we simply couldn't play our style of rugby," Suntory captain Yutaka Nagare said.

"They are world-class players and world-class men in their giving of time and understanding of how to grow the environment," Dillon said of his team's veterans. "We are lucky to have a number over 30 who are Japanese and (foreigners)."

Dan Carter, who turns 37 in March, kicked five conversions and a penalty goal and was ably supported at halfback by Atsushi Hiwasa, who at 31 is rediscovering the form that saw him win 51 caps for Japan.

The day's seven other games determined the final rankings and the match-ups of the one-off promotion/relegation games, to be played on Dec. 23, between the bottom four sides of the top flight and the top four sides in the Top Challenge League.

The Red Sparks will play TCL champions NTT Docomo Red Hurricanes in the final round of playoffs, the Shuttles will take on TCL runners-up Mitsubishi Sagamihara Dynaboars, Hino will play Kintetsu Liners, while Sanix's reward for their win is a game with Kurita Water Gush, who finished fourth in the second division.

At Chichibunomiya, Anderson's two tries -- the first the result of a patient build-up, the second due to a good offload from Isileli Nakajima -- saw Kobe take an early 12-0 lead.

Suntory struck back with Seiya Ozaki making the most of a clever delayed pass from Yusuke Kajimura.

But a Carter penalty and a try from Arita following his own charge down of a kick by Kotaro Matsushima put 17 points between the teams at halftime, with the Steelers knowing they had the strong northerly wind at their backs in the second half.

Two tries in the opening seven minutes of the second half killed off the contest.

Ashley-Cooper showed he still has plenty to offer Australia at next year's Rugby World Cup as he stretched Kobe's lead with a try that began with his own crunching tackle on Matsushima.

And Yamanaka showed great strength to go over after the Steelers once again stretched the Sungoliath defense with a combination of pace and patience.

"Those 10 minutes after halftime was when I thought, 'Perfect,'" said Carter. "That was the 10 minutes we needed to put the nail in the coffin."

Further tries from Franklin, Grant Hattingh, following a good pass from Anderson, and Yamanaka saw Kobe reach the half century and rub salt in the wounds of Suntory.

"Rugby in Kobe has been around for 90 years and we've taken those values and beliefs and put them into our culture," said Dillon. "We are a tight group and that's why we were able to put in a performance like today."