The Japan Times said Friday in a full-page notice that its editorial policy remains the same despite its recent change in descriptions of wartime "comfort women" and forced laborers from the Korean Peninsula, denying that it has bowed to external pressure.

The rare announcement by the country's oldest English-language newspaper came amid sharp reactions on social media and some overseas media reports that the change in the terms it uses was in line with the stance of Prime Minister Shinzo Abe's government. 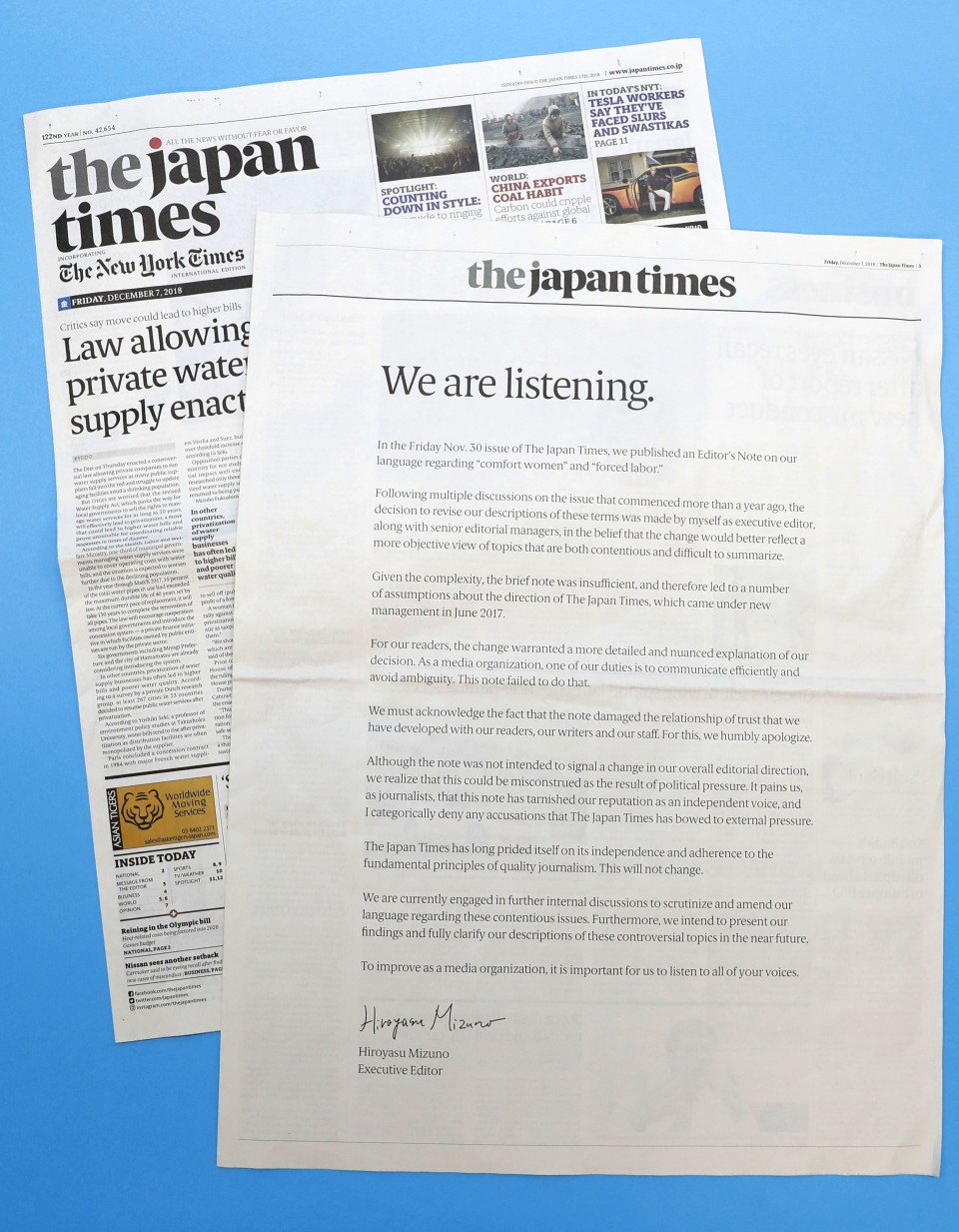 Japan Times Executive Editor Hiroyasu Mizuno said in the notice, "I categorically deny any accusations that The Japan Times has bowed to external pressure," while apologizing to readers and those working for the company for damaging the relationship of trust.

The change in the descriptions of the so-called comfort women and forced laborers has triggered an outcry inside the publisher and some readers have said they would quit subscribing to the daily.

The editor's note of Nov. 30 said, "The term 'forced labor' has been used to refer to laborers who were recruited before and during World War II to work for Japanese companies. However, because the conditions they worked under or how these workers were recruited varied, we will henceforth refer to them as 'wartime laborers.'"

As for "comfort women," the paper similarly said it "will refer to 'comfort women' as 'women who worked in wartime brothels, including those who did so against their will, to provide sex to Japanese soldiers'" because their experiences "varied widely."

The note appeared at the end of an article about a South Korean Supreme Court order for Mitsubishi Heavy Industries Ltd. to pay damages to two groups of South Koreans for wartime forced labor.

Mizuno said in the notice Friday, "Given the complexity, the brief note was insufficient, and therefore led to a number of assumptions about the direction of The Japan Times."

Mizuno later said in a separate comment that what is written in the editor's note does not mean the newspaper is banning phrases such as "comfort women" or "forced labor" and such descriptions will be used when they describe an issue in general.

Style rules on whether to use the phrase or the descriptions referred to in the note "will have to be applied on a case-by-case basis," Mizuno said.

The company is currently engaged in "further internal discussions to scrutinize and amend" its language regarding "these contentious issues" and plans to present its findings and fully clarify its descriptions in the near future, according to the notice.