Extreme weather can still potentially cause underwater landslides in a strait located between the islands of Java and Sumatra that may trigger more tsunamis after a tsunami struck parts of the islands over the weekend, claiming 429 lives, a government official said Tuesday.

At least 154 others are still missing and 1,485 were injured from Saturday night's tsunami, caused by an eruption of Mt. Anak Krakatau that hit coastal areas around the narrow Sunda Strait between the country's two most populous islands.

"We keep monitoring the tremor activities of Mt. Anak Krakatau, particularly under (current) extreme weather and high waves because such a condition can potentially cause the collapse of the volcano's flank, going down to the sea, and trigger tsunami," Dwikorita Karnawati, chief of the Meteorological, Climatology and Geophysics Agency, told a press conference just before midnight. 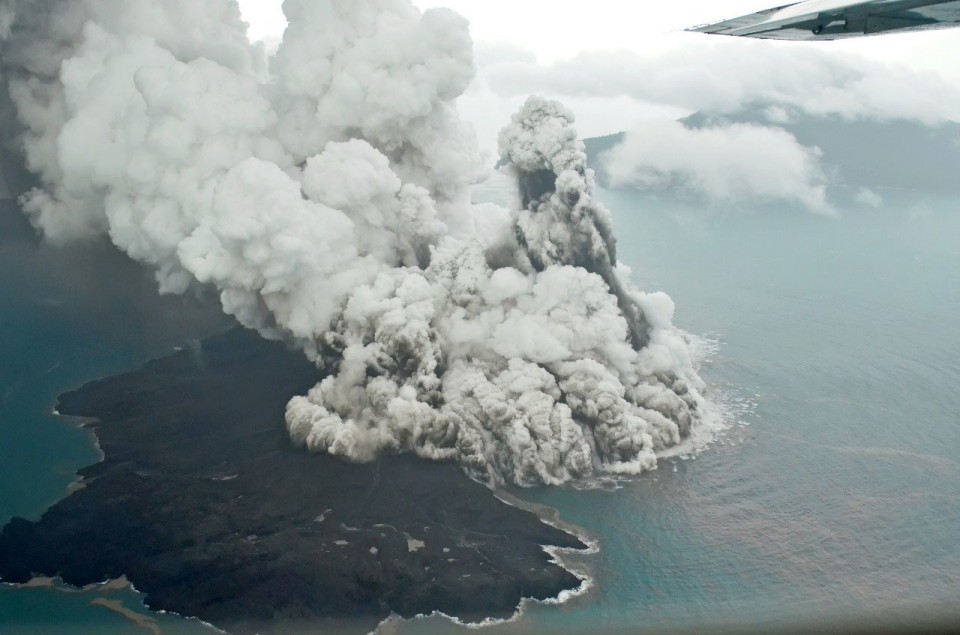 She expressed worries about heavy rains that is expected to take place from morning to afternoon Wednesday as it can cause landslides.

"The wall of the volcano's caldera have been getting fragile, especially if heavy rains poured onto it," she said.

Due to the potential underwater landslides and tsunami, Dwikorita called on the public to always stay alert and "stay away from coastal areas at least between 500 meters and 1 kilometer from the shoreline."

"The casualties may keep increasing...because there are some districts that have not been reachable due to damaged roads and collapsed bridges," Sutopo said, adding the tsunami has displaced 16,082 people and damaged thousands of buildings, including many hotels.

Based on eyewitness testimony and preliminary analyses by experts, the senior government official said the tsunami ranged between 2 and 5 meters in height the regencies of Pandeglang and Serang in Banten Province, on the western tip of Java.

Also affected were three regencies in Lampung Province, on the southern tip of Sumatra.

"That was why most of hotels and buildings (in Pandeglang) were flattened. If the tsunami was only between 1 and 3 meters, they would not be flattened like that," Sutopo told a press conference, adding that many more victims might be buried under the debris.

"We need more heavy machines to find the victims," he said.

As heavy machines have not been able to reach some areas, rescuers have been using hand-held tools or their bare hands to remove debris, amid torrential monsoon rains.

On Tuesday, Prayoga, who like many Indonesians goes by a single name, was seen walking at the seashore of Anyer Beach in Serang Regency, searching for bodies.

"The water level was up last night, so some victims might have been carried back ashore by the seawater this morning," said the 21-year-old rescuer from Jakarta.

"We could be rolled to the sea by the waves if we're not alert and careful," he said.

Sutopo said hotels along the beaches from Serang to Pandeglang were fully booked when the tsunami struck the areas in Sunda Strait as it is holiday season in Indonesia.

The tsunami came suddenly, with no warning, so people had no time to evacuate, he said.

According to the Meteorological, Climatology and Geophysics Agency, the tsunami was triggered by underwater landslides caused by the partial collapse of the caldera of Mt. Anak Krakatau, following an eruption earlier the same night.

While the country has an early warning system in place earthquake-triggered tsunami, it does not have a similar system to warn of possible tsunami after a volcanic eruption.

"No one expected that the eruption of Mt. Anak Krakatau would cause underwater landslides and trigger a tsunami because the eruption was not the biggest ever," Sutopo said, adding that its eruptions in October and November were much bigger and the frequency of tremors from the volcano was not high.

"It will be a challenge for us in the future to develop an early tsunami warning system for volcanic activities because we have 127 volcanoes and 13 percent of the world's active volcanoes exist in Indonesia," he said.

Although his family survived, local villager Junaedi, 32, said the disaster has left him so traumatized that he no longer wants to live near the coast and has decided to move from his village.

"It was a night with a clear sky, full moon, no rain and good weather when all of a sudden, out of the blue, the tsunami struck, without the slightest warning," he told Kyodo News.

The volcano had been undergoing stuttering eruptions since June, mostly minor ones.

It is the product of the infamous Krakatau, whose tsunami-triggering eruption in 1883 was one of the largest of modern times, killing more than 36,000 people and leaving a massive crater in which grew Mt. Anak Krakatau, or "Child of Krakatau."

As of September, the volcano's height was 338 meters. But after Saturday's partial caldera collapse, it is estimated to have shrunk to 329 meters, according to a volcanologist.