The Japanese government pushed ahead Friday with full-fledged offshore landfill work necessary for building a replacement facility for a U.S. air base within Okinawa, marking a significant phase in the relocation process that has faced persistent local opposition.

The adding of tons of soil and sand began before noon in the Henoko coastal district of Nago, the planned location for the transfer of U.S. Marine Corps Air Station Futenma, which currently sits in a crowded residential area of Ginowan. 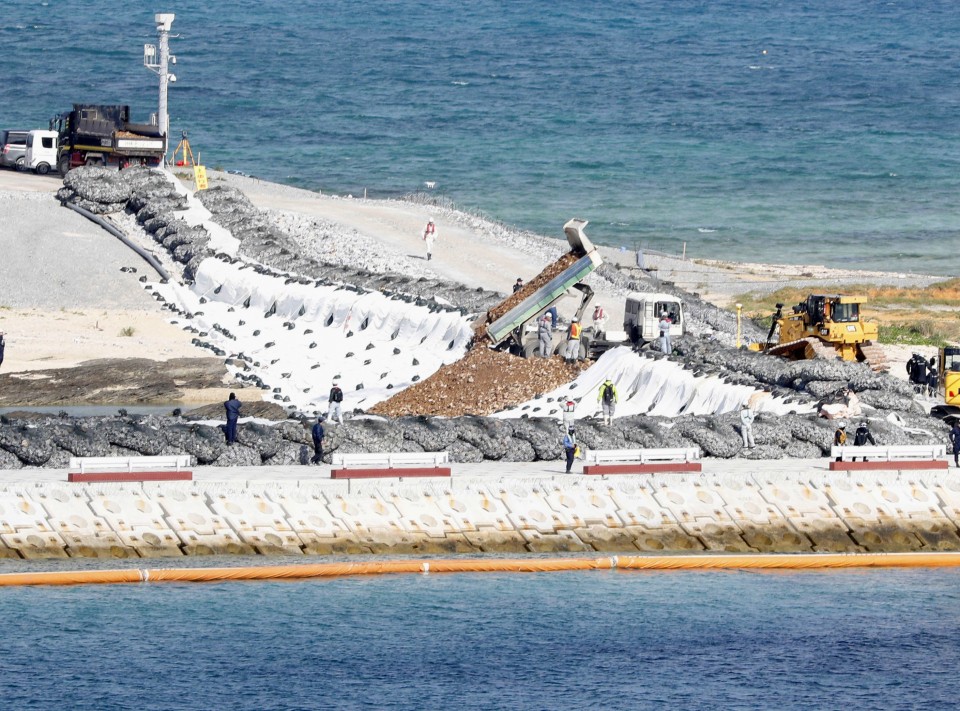 Angry locals protested around the site, with some crying out not to "kill" the ocean, known for its diverse marine environment. The latest development also immediately prompted an outcry from the local government.

"I cannot help feeling strong resentment over the work being carried out in defiance of the prefectural residents' will," Okinawa Gov. Denny Tamaki told reporters, while also calling out to the Japanese public to support the prefecture's position.

"The more the government forcibly proceeds with the construction work, the stronger the anger of the prefectural people will grow," he said.

The relocation plan originated from an agreement reached between the Japanese and U.S. governments in 1996 after public anger was fueled by the 1995 rape of an Okinawa girl by three American servicemen. But progress has been slow, with many locals hoping the U.S. base will be relocated outside the subtropical island prefecture.

Defense Minister Takeshi Iwaya told reporters in Tokyo the central government will advance the construction work so as "to achieve the complete return of (the land occupied by) the Futenma air base (to Japan) at the earliest possible date."

He also maintained the government's position that the current relocation plan is "the only solution" for removing the dangers posed by the Futenma base, which is situated close to schools and homes, without undermining the deterrence provided by the Japan-U.S. security alliance.

Under the plan, the Defense Ministry is scheduled to reclaim some 157 hectares of land in waters off the Henoko area and construct a V-shaped runway. 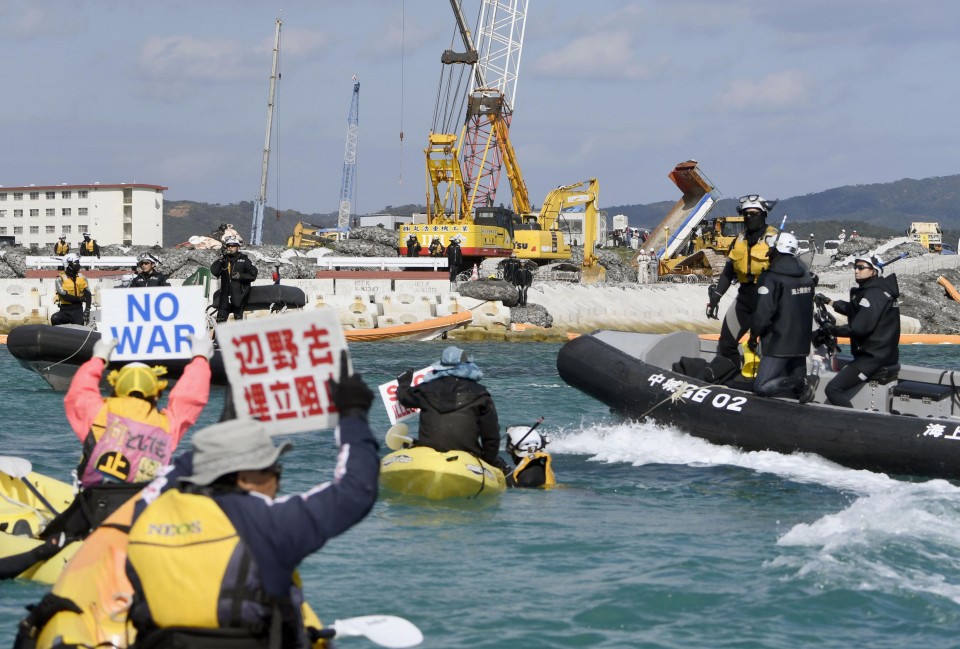 While the ministry initially said it will need five years to complete the reclamation work, it is expected to take longer due to changes in the construction process.

Tamaki suggested that he still has a way to counter the ongoing move, citing that he can exercise his authority of not giving consent to certain ground improvement work the central government may eventually want to implement inside the landfill site.

"There is a need to deal with a soft ground area. The prospects for completion of the new Henoko base are not clear," the governor said in a message introduced at a gathering of base relocation opponents on Friday.

The prefectural government believes that a soft ground area exists off the coast of Henoko, based on a survey conducted by the Defense Ministry. The state needs to seek permission from the Okinawa governor to conduct the improvement work.

Many hours before the soil was dumped in a 6.3-hectare area encircled by newly built seawalls, protesters gathered in front of the gates of the U.S. Marines' Camp Schwab, adjacent to the site, and held sit-in demonstrations while holding up placards and calling for the immediate suspension of the landfill work in a standoff with riot police.

"We have been betrayed by the government all too often. I am sick of it," said 69-year-old Seiko Kaneku from Uruma on the prefecture's main island.

Some activists in canoes sought to block the progress of the work by approaching ships carrying sand and soil, but Japan Coast Guard boats drove them back.

The division between the central and local governments deepened under the tenure of previous Okinawa Gov. Takeshi Onaga, and now the fight has been continued by Tamaki, who was elected in September on an anti-U.S. base platform after his predecessor died of cancer.

There have been legal battles, too, but the central government's plans to proceed with construction work were given a boost after the Supreme Court ruled against Okinawa's position in December 2016.

In April last year, the central government began building seawalls in the Henoko coastal area so that it can place soil and sand inside the encircled area.

After decades of hosting the bulk of U.S. military facilities in Japan, many people in Okinawa are frustrated with noise, crime and accidents linked to them and do not want any new base to be built in the prefecture.

"Why do they force bases onto Okinawa? Don't ignore the people's will," said Shoshin Nakama, a 71-year-old farmer from the town of Kin on the main island.

Local residents and civic groups are also concerned about potential environmental damage caused by the relocation. The sea off Henoko has coral reefs and is a habitat of the endangered dugong.

An Okinawa prefectural referendum on the base transfer plan will be held Feb. 24, with Tamaki hoping it will be a chance to further demonstrate Okinawa's opposition to the plan.