Tennis' rising star Osaka reaping the spoils of her success

Since announcing her arrival with a maiden Grand Slam win in September, Naomi Osaka has captured Japanese hearts with her quirky sense of humor and straight-talking press appearances, but despite her on-court success, an air of mystery remains around the 21-year-old.

In her most recent public appearance on Tuesday, Osaka, who currently resides in Florida, shared a rare glimpse into her interests outside of tennis.

She said that while she continues to work on consolidating her place among the sport's elite, she has the same concerns as any other woman her age, and her new deal with skin-care and cosmetics maker Shiseido Co. gives her the opportunity to connect with her demographic.

"When I practice, I usually play outside for maybe more than five hours, so I think it's really important to take care of your skin," said Osaka, looking every part the superstar in a gold dress at a central Tokyo hotel.

The 2018 U.S. Open winner announced she has begun a brand ambassador deal with the Japanese cosmetics company, a relationship that has seen her lavished with a year's supply of sunscreen that will come in handy as she grinds on the practice courts.

"For me, I tend to use a lot of facial products because, in Florida, the sun is very harsh," she said.

"I don't want to have wrinkles anytime soon, so I guess I consider that."

Osaka, who was born in Japan and raised in the United States by her Japanese mother and Haitian father, started the year as world No. 68 but flew up the rankings to a career-best No. 4 with titles in Indian Wells in March and at the North American Grand Slam in Flushing Meadows later in the year. 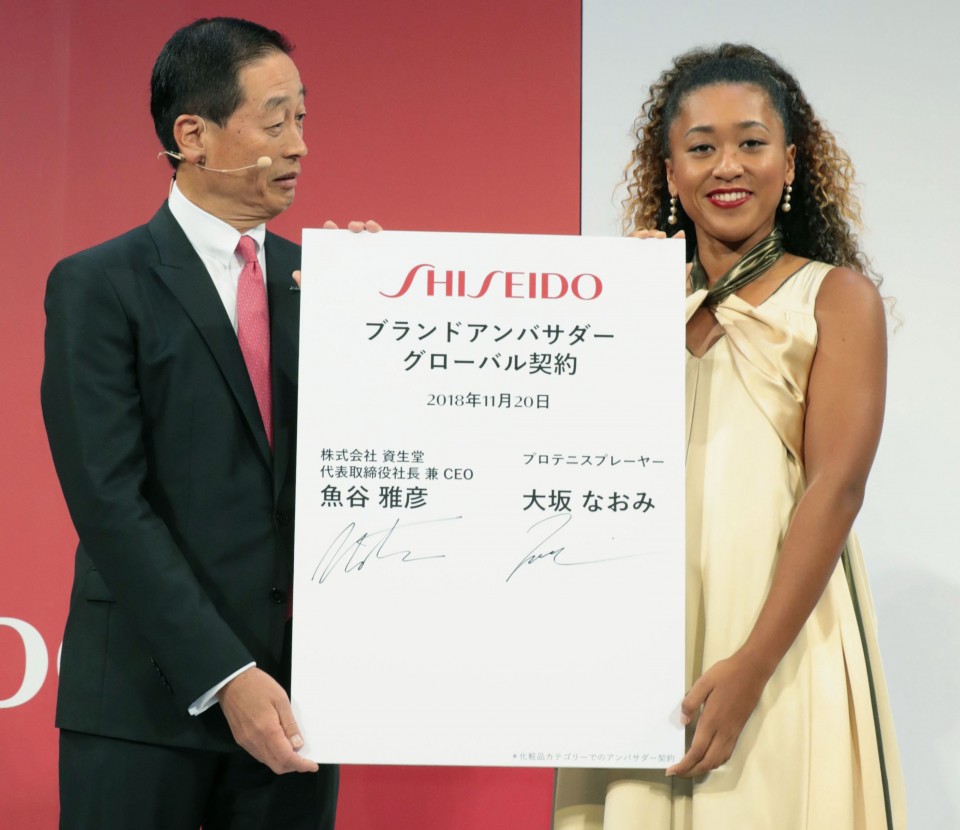 Her success meant she qualified for the season-ending WTA Finals for the first time and finished the season ranked fifth in the world.

Her rapid rise has meant not just her fans but also companies want a piece of the marketable youngster. Japanese automaker Nissan Motor Co. inked her to a deal and in August watch company Citizen Watch Co. added her to their stable of stars.

Her relatability seems to come not only from her on-court exploits but her ability to connect with Japan's youth, something that was demonstrated perfectly when she referenced the Pokemon theme song in an on-court interview, saying her career ambitions are "to be to be the very best that no one ever was."

Her relatively limited grasp of Japanese also led to the phrase "Naomi-bushi" (Naomi-esque) being nominated as one of Japan's buzzwords of 2018. Osaka's simple and straightforward use of the language during press conferences and interviews has proven endearing to her fans.

But, despite all the attention -- including her being featured on the cover of a men's fashion magazine after her U.S. Open victory over 23-time Grand Slam winner Serena Williams -- the rising star says having fun remains vital to her continued success.

"I hope to do well next year and have fun. I think when I have fun is when I play my best, so that's sort of my biggest goal."