South Korea said Wednesday it will dissolve a foundation set up as a key pillar of a 2015 bilateral agreement with Japan to settle the issue of Korean women forced to work in Japanese wartime military brothels, in a move that could further strain bilateral ties.

The agreement, under which Japan provided 1 billion yen (about $8.8 million) to the foundation to help former "comfort women" and their families, has been unpopular in South Korea.

Japanese Prime Minister Shinzo Abe, stressing that Japan has done its part by following through on a bilateral agreement reached in December 2015 to "finally and irreversibly" settle the comfort women issue, said relationships between countries cannot be sustained unless international promises are kept.

Speaking to reporters, he urged South Korea to behave "in a responsible manner as a member of the international community." 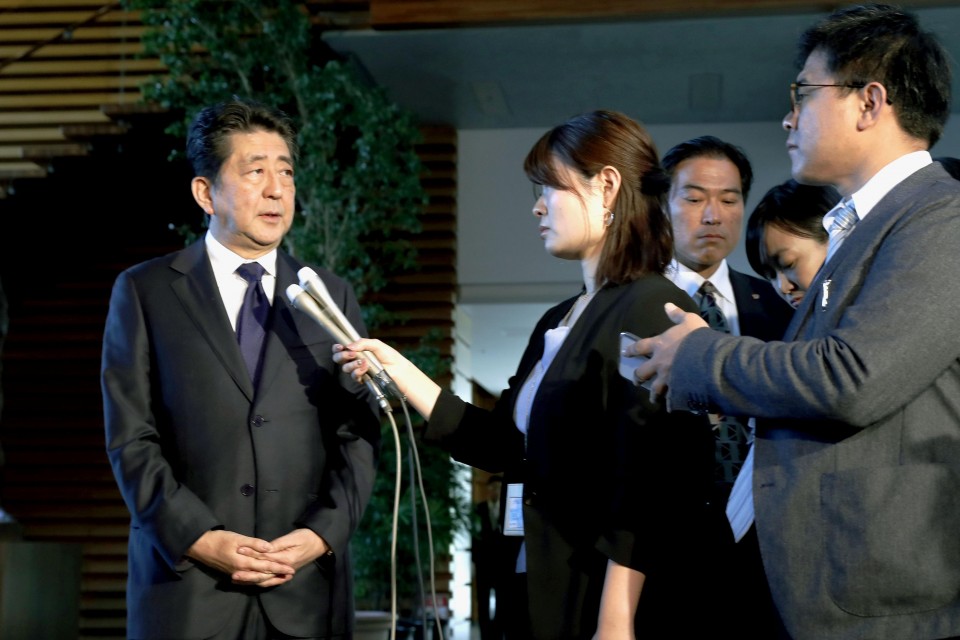 South Korean President Moon Jae In's government, which was inaugurated in May 2017, responded by saying it does not intend to scrap or renegotiate the 2015 agreement reached under the previous administration of President Park Geun Hye, despite it being an inadequate solution to the "comfort women" issue.

The Moon administration has said the 2015 agreement cannot settle the long-standing issue since it failed to reflect the opinions of surviving victims.

As part of the deal, South Korea set up the Reconciliation and Healing Foundation in 2016, and used the Japanese money to provide cash payments to the women and their families.

In September, however, Moon told Abe that the foundation was not functioning as intended and suggested it may be discontinued. His government subsequently took steps to replace the Japanese fund with money from its own budget.

In announcing the foundation's dissolution on Wednesday, South Korea's Gender Equality and Family Ministry said it plans to take legal steps to dissolve the entity, expected to take at least six months to complete.

As for the 5.78 billion won ($5.1 million) left over from the Japanese fund, the ministry said it will come up with a reasonable way to spend it along with the 10.3 billion won it has allocated, after hearing the opinions of former comfort women and others.

The Foreign Ministry plans to consult with the Japanese government over the matter, it added.

South Korean civic groups and surviving victims welcomed Wednesday's government decision, while saying this is only a start and the ultimate goal is to receive a sincere apology from the Japanese government.

"The Japanese government should stop this nonsense that the military sex slave issue was finally and irreversibly solved by the 2015 bilateral agreement," said Yoon Mee Hyang, chairwoman of the Korean Council for Justice and Remembrance for the Issues of Military Sexual Slavery by Japan, at a rally in Seoul.

She told a press conference afterward that the government need not abide by the accord since "it was not a treaty but just an agreement without any legal force, and therefore, the moment the South Korean government said the issue has not been settled, the agreement was nullified."

The foundation was intended to provide about 10 million yen each to former comfort women who were alive at the time the bilateral agreement was reached, while the proxies of those who had died by then were to be paid about 2 million yen each.

Of the 47 women who were alive when the deal was reached, 34 had received cash payments by mid-November, with 58 proxies of the 199 deceased having received them. But some survivors have rejected the money.

The rally in central Seoul, held every week to protest against Japan over its handling of the comfort women issue, attracted about 40 people on Wednesday.

One of the former comfort women sent a message to the rally from hospital, saying she was relieved to hear of the government's decision to dissolve the foundation.

"Abe must say 'sorry' and compensate," the message said.

In 1993, then Japanese Chief Cabinet Secretary Yohei Kono apologized after a government study concluded that the Japanese military was involved with wartime brothels where comfort women, including many Koreans, lived under a coercive atmosphere, having been recruited against their will.

In a formal statement, he extended Japan's "sincere apologies and remorse to all those...who suffered immeasurable pain and incurable physical and psychological wounds as comfort women."

Abe, in a 2015 statement on the occasion of the 70th anniversary of the end of World War II, upheld Japan's past apologies for its wartime actions as "unshakable," while stopping short of offering a fresh apology of his own.

Japan-South Korea ties have long been strained over historical grievances related to Japan's colonial rule of the Korean Peninsula between 1910 and 1945.

They have been under added pressure since a recent South Korean Supreme Court ruling ordering a Japanese company to compensate a group of South Koreans over forced labor during WWII.