The top U.N. official for refugees has praised Japanese government plans to build a society that is mutually beneficial for foreign workers and Japanese people.

"The government is studying how to improve co-existence. I would say this is an important, maybe historic effort (for Japan)," Filippo Grandi, U.N. high commissioner for refugees, said in a press conference at the Japan National Press Club in October. 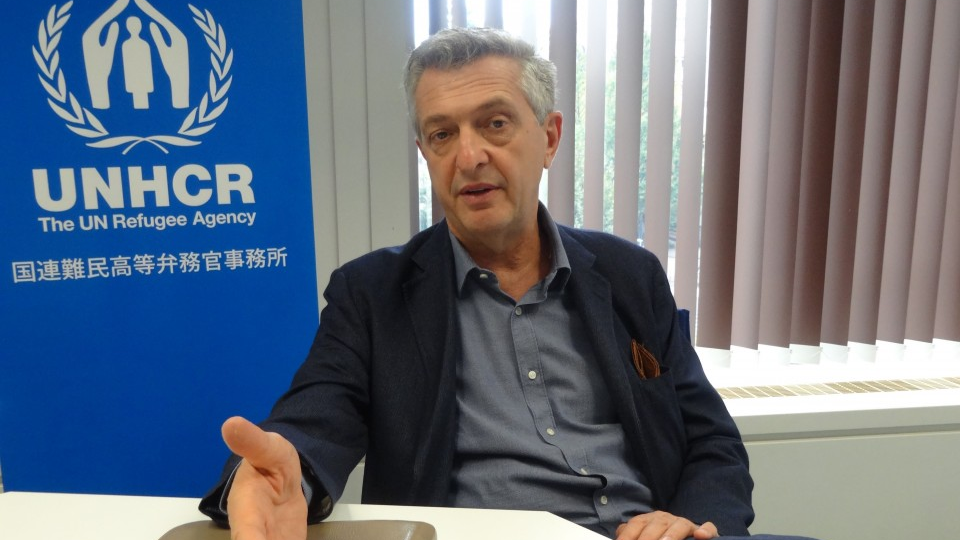 The government has introduced a bill to the current Diet session to revise the immigration control law to accept more foreign workers from next April. The ruling Liberal Democratic Party aims to start debating the bill this week.

The bill, approved at a Cabinet meeting late last week, would create a new visa status to allow more foreign blue-collar laborers to work in Japan in various sectors deemed seriously short of labor. It is regarded as a major shift in Japan's policy on foreign labor.

Grandi, an Italian official who has been in the post since 2016 and visited Japan in late October, said that a rise in foreign workers itself should not become a factor of friction in society.

But he told Kyodo News in an interview that if there is a rise in the number of foreign workers and there is "no proper integration" into society but exclusion and marginalization, "then they become a problem."

The Geneva-based UNHCR found a record 68.5 million people have been driven from their homes across the world at the end of 2017, due to war, violence and persecution.

There has been a rise in anti-immigration sentiment across the Western world as refugees and migrants have flooded into many nations, notably from places like Syria.

U.S. President Donald Trump, who proposed the construction of a wall along the U.S.-Mexico border, said his nation "will not be a migrant camp. And it will not be a refugee-holding facility."

Grandi is concerned that "shutting down borders" or "building walls" is not only wrong but counterproductive, because such measures would fuel illegal movements of people.

"That attitude may gain politicians' votes in the short term, but in the long term does not render a service either to the people on the move or to the states that receive them," he said.

Japan is considering accepting more Asian refugees who are under protection in neighboring countries from 2020, with an eye to doubling the current annual ceiling of around 30.

Grandi welcomed the modest move and said Tokyo would give "a strong signal" if it increases the number of refugees it accepts.

He also said he expects the 2020 Tokyo Olympic and Paralympic Games to be a "showcase" for Japan to demonstrate "best practice" in more equally accommodating foreigners, including refugees.

He cited the 2016 Summer Olympic Games in Rio de Janiero as a good example. At the games, 10 refugee athletes from four countries competed together as the first ever Refugee Olympic Team.

The 10 athletes proved that they were ordinary people and "the presence of refugees was not a threat," Grandi said. "It is the opposite of the message of some politicians" who claim that refugees may worsen the state of public order, create job competition, and ruin traditional values, he added.

The UNHCR said in a statement at the time that participation by the refugees was a tribute to the courage and perseverance of all refugees. Grandi hoped "this will be the same in Japan." A Refugee Olympic Team will be formed again at the Tokyo Olympics.

"In Brazil, society is already very diverse. Japan is not such a diverse society. But Japanese people have a lot of heart. They will embrace (the refugee athletes)," he said.

He noted that people in disaster-prone countries such as Japan could be naturally empathetic to refugees, since there are disaster victims in Japan who have been driven from their homes and are still living at evacuation centers.

Before assuming his current office, Grandi was the top official at UNRWA, a U.N. agency that assists Palestinian refugees. After the earthquake and tsunami that devastated northeastern Japan in March 2011, "Among the first people who sent messages of solidarity were Palestinian refugees," he said. "This empathy between people affected by disasters is very important."

The central message they conveyed was "We can't send you anything, but we want you to know that we feel strongly for you."

Grandi, formerly an aide to one of his predecessors as high commissioner for refugees, Sadako Ogata, said Japan is a "soft power" both economically and culturally and has political influence both in this region and beyond. "What Mrs. Ogata always said is play that role. It is needed," he said.

He said that sharing responsibly by increasing contributions to the region, such as assistance for refugees as well as improving co-existence between foreigners and Japanese nationals, are challenges for Japan.

"The legacy of Mrs. Ogata should not be lost," Grandi said, adding that young Japanese people in particular should not be afraid of diversity. "In the end, it enriches society."