Japan is launching its first survey on "overtourism," or the phenomenon of a popular destination becoming overrun with tourists in an unsustainable way, to counter nuisances such as noise and congestion that disrupt locals' lives, according to officials.

The Japan Tourism Agency aims to compile a report by the end of March based on a survey of municipalities with major tourists spots and to explore ways to foster an environment where tourism can coexist with residents' lives amid a surge in foreign visitors to the country. 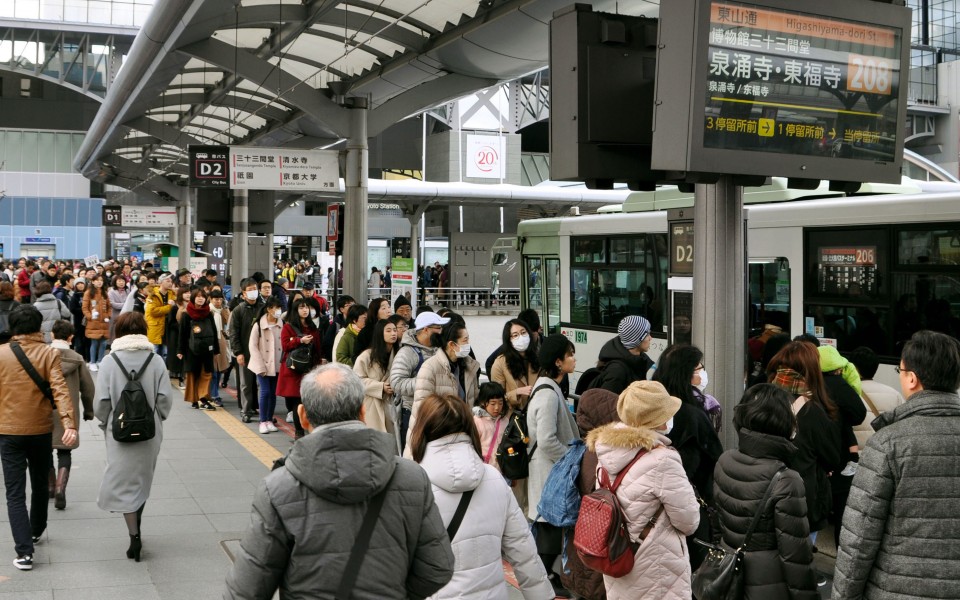 (In front of JR Kyoto train station in February 2018)

The agency has already sent questionnaires to around 50 local governments and will start a fresh survey on another 150 or so within October.

Tourism-related problems occur during peak seasons in popular sites such as the ancient cities of Kyoto and Kamakura, with commuter traffic affected by severe congestion on trains and buses.

Besides complaints related to lodgings, nuisances reported by municipalities include illegal parking in vacant lots in the World Heritage site of the village of Shirakawa in Gifu Prefecture and trespassing into fields near a major natural beauty spot in the town of Biei in Hokkaido.

The survey's goal is to learn more about the degree of public congestion, breaches of local rules, environmental degradation and other issues that may occur due to the high number of tourists.

The agency is also planning to set up in November a study group involving municipality officials and experts. The new body will propose policies for the central and local governments based on the survey results so that Japan can develop regions that are "good to live in and visit," the officials said.

The survey of the 150 municipalities will mostly target prefectural capitals, major cities and those with tourism promotion bodies known as "destination management organizations."

Visitors to Japan reached 21.31 million between January and August this year, up 12.6 percent from a year earlier. For the whole of 2018, the number is projected to hit 30 million for the first time.

The Japanese government aims to increase the number of foreign tourists to 40 million by 2020 and to 60 million by 2030. Tokyo is aware that the numerical targets may not be met if a backlash from residents diminishes tourist satisfaction, the officials said.