During their summit in Tokyo, Abe and Modi also affirmed the need to work closely toward a "free and open Indo-Pacific" and push their objective of promoting universal principles such as freedom of navigation and the rule of law in wider areas ranging from Asia to Africa.

"Relations between Japan and India have the biggest potential in the world. A strong Japan benefits India and a strong India benefits Japan," Abe said at a joint press conference with Modi after their talks.

Modi responded, "I believe until and unless India and Japan have strong relations Asia can never develop."

Abe's 12th summit with Modi came after he held talks with Chinese President Xi Jinping on Friday in the first official visit to Beijing by a Japanese leader in nearly seven years. 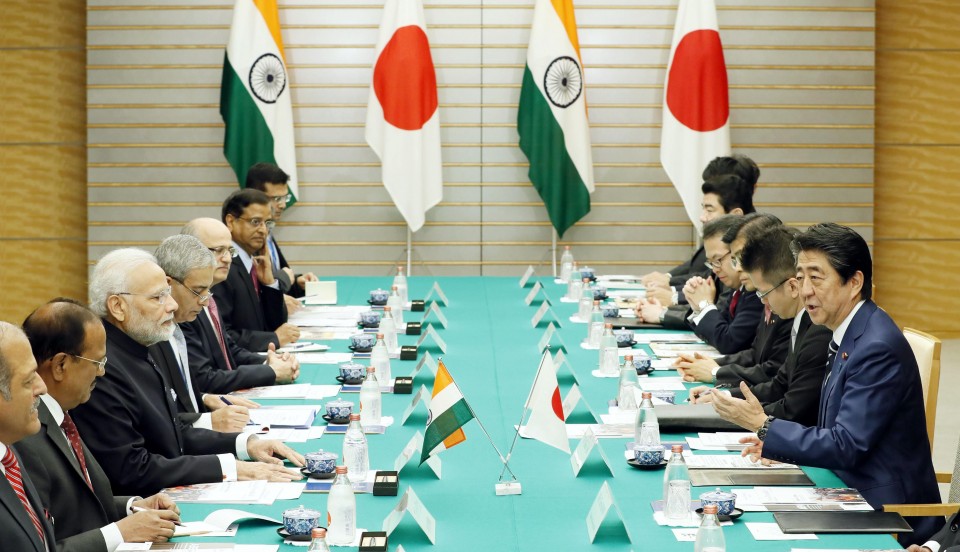 But as Japan remains cautious about China's military expansion and maritime assertiveness in the East and South China seas, it is seeking to bolster security cooperation with India, the world's most populous democracy, along with the United States and Australia.

The two leaders agreed "to expand concrete cooperation with the United States and other partners," said a joint statement issued after the talks.

Abe and Modi agreed to upgrade the countries' "two-plus-two" bilateral diplomatic and security talks to the ministerial level from the vice ministerial level, which the Indian leader described as aimed at promoting "peace and stability in the world."

They also said the two countries will start negotiations to clinch an acquisition and cross-servicing agreement to enable their forces to share defense supplies such as fuel and ammunition, it said.

To realize a free and open Indo-Pacific, Japan believes it is important to carry out "quality infrastructure" projects in accordance with international standards that are sufficiently transparent and take into consideration the fiscal sustainability of recipient countries.

India shares Japan's view, at a time when China is rapidly expanding its clout with Xi's "One Belt, One Road" cross-border infrastructure initiative, with concern growing among some developing countries that massive construction projects primarily involving Chinese companies could leave them with huge debts.

Abe said Japan will provide low-interest loans worth 316.4 billion yen ($2.83 billion) for seven infrastructure projects in India. That includes up to 150 billion yen to help a high-speed railway project employing Japan's shinkansen technology between Mumbai and Ahmedabad in western India, which is a pillar of the Abe-led initiative in the South Asian nation.

As part of efforts to help facilitate flows of people and goods, the two leaders confirmed cooperation in building infrastructure in India's less-developed northeastern states neighboring Myanmar and Bangladesh.

They also talked about joint infrastructure collaboration in third countries in the Indo-Pacific region, including the two Indian neighbors, as well as Sri Lanka and Kenya.

On economic cooperation, Abe and Modi agreed to resume a bilateral currency swap arrangement worth $75 billion to channel liquidity in financial crises.

During Modi's previous Japan visit in 2016, a civilian nuclear cooperation agreement was signed to enable Japan to export nuclear technology to India. The deal took effect the following year.

On Sunday, Modi became the first foreign leader to be invited to Abe's vacation home near Mt. Fuji in Yamanashi Prefecture, west of Tokyo. The invitation was extended as a token of gratitude for the Indian leader's warm reception of Abe in his home state of Gujarat in September last year.