Okinawa hosts nearly three quarters of the U.S. military bases in Japan and those who oppose calls to reduce this burden have often said the island prefecture is dependent on the bases for its economy.

However, some experts now say there are increasing opportunities for prosperity in Okinawa even without the economic benefits of hosting the bases -- which include land rent incomes and consumption by servicemen -- given recent examples of commercially successful use of land returned to Japan by U.S. forces.

"Okinawa's economy is no longer dependent on the U.S. bases," Yasuo Kurima, a professor emeritus at Okinawa International University, said. But he also noted that it is uncertain whether such examples would increase when more land is restituted.

Aeon Mall Okinawa Rycom in the village of Kitanakagusuku is widely seen as one of the cases signaling the possibility of Okinawa's economic independence.

The five-story shopping mall with a total floor area of around 160,000 square meters opened in 2015 on land which had been a golf course for U.S. military personnel since 1948.

Some 13 million people including Japanese and foreign tourists and U.S. servicemen visit the mall that houses more than 200 stores every year, according to operator Aeon Mall Co. 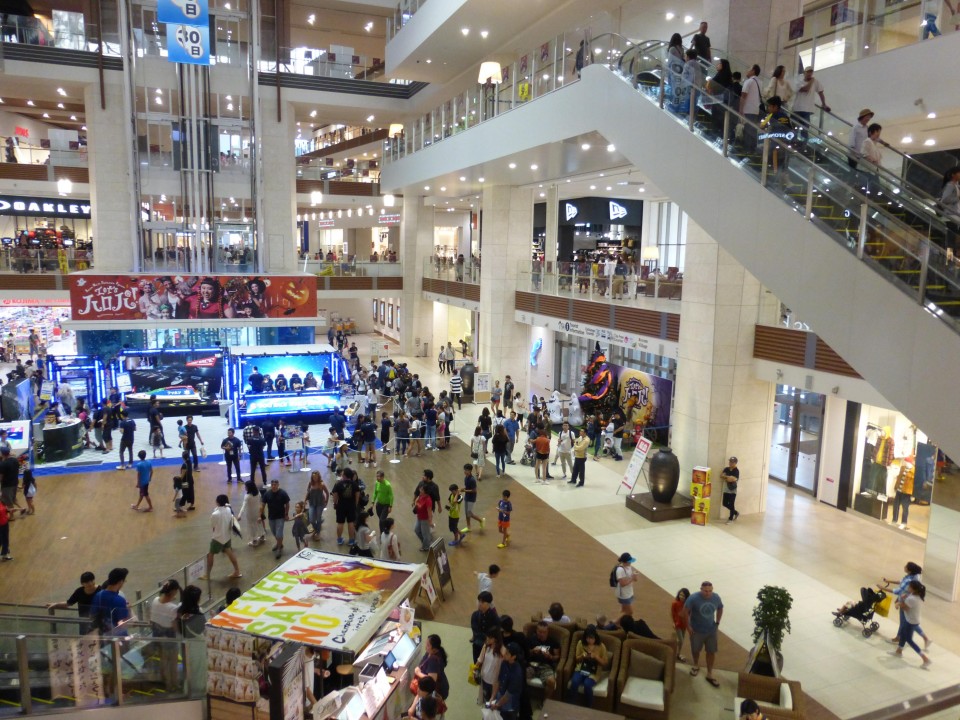 "Our business is going well so far," said Norimasa Sato, general manager of the mall. Sales from tax-free shopping there were the highest among all Aeon shopping malls across Japan in fiscal 2017.

"We come here roughly every two months without any purpose. It is convenient because we had no place to hang around before," said Kenji Maedo, 34, who visited the shopping mall with his family.

Most local residents know the mall was built on a site once used by the U.S. military, Maedo said.

The operating firm signed deals with around 380 landowners in 2009 to construct the shopping mall. The U.S. military returned the site to Japan the following year.

Other redevelopment projects on former U.S. military sites include the construction of Mihama American Village, a shopping and entertainment area in the village of Chatan, and a new urban district of prefectural capital Naha.

With those projects, Okinawa's economic dependence on the U.S. military has been declining, said the prefectural government.

The ratio of revenue from hosting the bases, including land rent and incomes for Okinawa people employed at the U.S. facilities, to gross income in the prefecture dropped to 5.3 percent in 2015 from 15.5 percent in 1972, the year of the Okinawa reversion to Japan, according to the prefecture.

In 2015, the prefectural government estimated economic effects from the new Naha district and two other redeveloped areas at around 246 billion yen ($2.2 billion), including shop and restaurant sales and real estate rent, 28 times higher than before the land was restored.

The prefecture also said such favorable effects were expected to expand with the possible return of land used by five other facilities, including U.S. Marine Corps Air Station Futenma.

The central government is working to relocate the Futenma base from a crowded residential area of Ginowan to the less populated Henoko coastal area of Nago, despite opposition led by new Okinawa Gov. Denny Tamaki, who says the base should be moved outside the prefecture.

Some experts say, however, the prefectural government's projections may be too optimistic.

Akira Shinohara, a former professor of public finance at Daito Bunka University in Tokyo, warned that locating too many commercial facilities in the island prefecture could have a negative impact on its economy.

"If so many commercial and entertainment facilities are built everywhere in Okinawa, it would be obviously an excess of supply," Shinohara said.

In fact, many landowners in Okinawa are hoping their property will remain used by the U.S. military because of relatively high rents, making it difficult to form a consensus about how to use the land in the future, according to Shinohara.

The rent is set through negotiations between landowners and the state and paid by the Japanese government, based on an agreement between the United States and Japan.

To form a smoother consensus among landowners, the central government should temporarily buy all the land to be returned and consolidate the opinions of not only landowners but also local residents before handing over the property to the private sector, said Kurima of Okinawa International University.

As the central government has raised the rent received by landowners, it must also be the government that "takes responsibility for the result," he said.