Japanese scientist Tasuku Honjo and American James Allison won this year's Nobel Prize in physiology or medicine on Monday for their discoveries leading to new approaches in fighting cancer.

The 76-year-old Honjo -- a professor emeritus at Kyoto University known for his discovery of a protein that contributed to the development of an immunotherapeutic drug against cancer -- is the 26th Japanese Nobel prize winner.

Honjo and Allison, 70, a professor at the University of Texas, "showed how different strategies for inhibiting the brakes on the immune system can be used in the treatment of cancer," the Nobel Assembly of Sweden's Karolinska Institute said.

The discoveries by the two winners constitute a "landmark in our fight against cancer," the institute said.

"I am greatly honored and happy," Honjo said at a press conference at the Japanese university. "I'd like to continue researching cancer for a while so that this immunotherapy will help save more cancer patients than ever before."

The two scientists both studied proteins that function as brakes on the immune system to attack tumor cells more effectively.

"I'm honored and humbled to receive this prestigious recognition," Allison said in a statement released by the Texas university's MD Anderson Cancer Center, adding that seeing cancer patients who have been successfully treated with the help of his discovery are "living proof of the power of basic science." 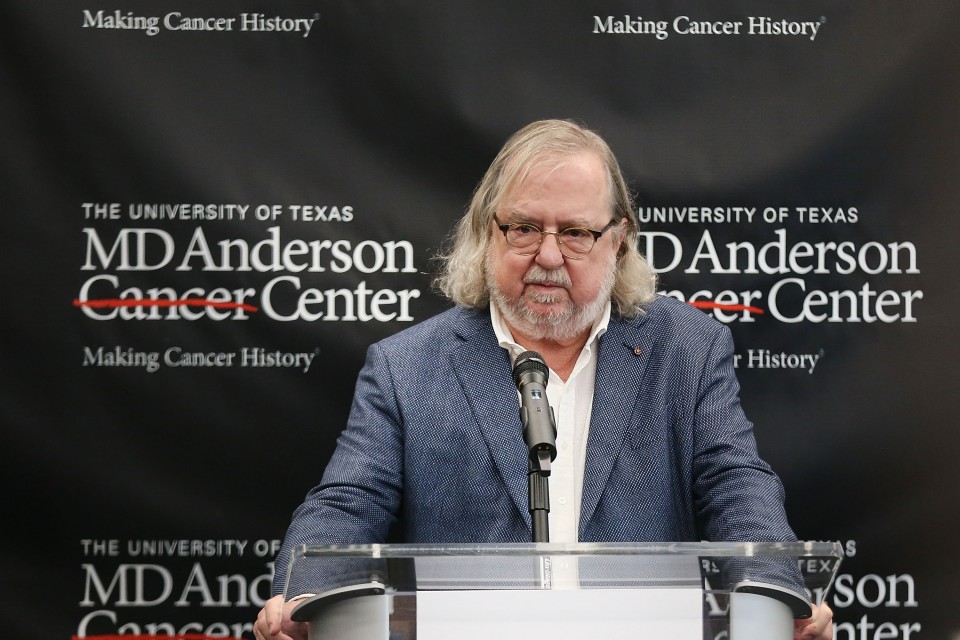 (James Allison at a press conference in New York)
[Getty/Kyodo]

Honjo opened a pathway for a new cancer treatment by discovering the PD-1 protein, which is responsible for suppressing immune response, on the surface of T-cells, a type of white blood cell.

His method of treating cancer by controlling the protein's function to suppress immunity led to the development of Opdivo, a drug used against lung cancer and melanoma.

Along with surgery, anticancer drugs and radiation therapy, immunotherapy is drawing attention as another treatment for cancer.

Following the discovery of the protein in 1992, Honjo presented his research in 2002 showing that a drug that prevents the unification of cancer cells and the PD-1 protein is effective against cancer in animals.

Four years later, his research was tested in a clinical examination and in 2012 a study proved clear efficacy in the treatment of patients with various types of cancer, before Opdivo was finally approved in Japan in July 2014 and subsequently in the United States and Europe.

Based on his discovery, Ono Pharmaceutical Co., headquartered in Osaka and Medarex Inc. of the United States jointly developed the drug.

Cancer is the second major cause of death globally after cardiovascular diseases and 9.6 million people across the world are estimated to die in 2018, according to the World Health Organization.

"The important thing is to always have a sense of wonder"

A native of Kyoto, Honjo spent much of his youth in the city of Ube in Yamaguchi Prefecture. As a child, he enjoyed the outdoors, and deepened his interest in becoming a scientist by observing Saturn and reading the biography of renowned Japanese bacteriologist Hideyo Noguchi (1876-1928).

After graduating from the medical department of Kyoto University, Honjo studied at the Carnegie Institution for Science between 1971-1973, where he was exposed to the latest research on genes and immunology.

Honjo, who became a Kyoto University professor emeritus in 2005, is the fifth Japanese winner of a Nobel medicine prize.

Prior to Honjo, Japanese scientist Yoshinori Osumi won the award in 2016 for discovering and elucidating mechanisms for autophagy, an intracellular process that degrades and recycles proteins.

Honjo and Allison will share their prize of 9 million kronor ($1.1 million) at a formal ceremony in Stockholm on Dec. 10.