This year, when the torrential downpours that hit western Japan left their mark on Ehime Prefecture as well, the 100th National High School Baseball Championship took place. Wonderful games were held in which players gave their all, starting with regional preliminary rounds, as high school boys sought to advance to the final stages at Koshien Stadium in Hyogo Prefecture, long a "sacred place" for baseball in Japan.

Through its efforts, the Saibi High School baseball team became the prefecture's representative in the national championship, shouldering the dreams of all local high school players. Saibi continued to perform amazingly at Koshien, in keeping with the commemorative 100th summer tournament, delivering thrills, dreams and vitality to areas affected by the natural disaster.

It is not too much to say that the history of baseball in Ehime began with master haiku poet Masaoka Shiki. Shiki taught baseball at his alma mater Matsuyama Junior High School, as it was called under the old education system, when he returned to his hometown of Matsuyama in 1889.

About 130 years ago, U.S. nationals who visited Japan soon after the country opened itself to the outside world are said to have introduced local people to baseball as a form of recreation. Immediately captivated, Shiki took up the game.

After suffering ill health, he made efforts to spread the joy of baseball while working as a newspaper reporter. He wrote the following "tanka" short poem around 120 years ago: "Far away under the skies of America, they began baseball – ah, I could watch it forever" (as translated by Japanese literature scholar Janine Beichman). His great contribution to popularizing baseball, a sport in which he became engrossed, was subsequently recognized and led him to be enshrined in Japan's Baseball Hall of Fame.

Our predecessors in Ehime took up where Shiki left off, developing high school baseball and nonprofessional baseball sponsored by companies. The enthusiasm for the baseball that Shiki conveyed to local people has since spread throughout the prefecture and I think baseball has developed beyond a sport to enter the realm of culture.

Two years from now, baseball and softball are set to be revived as competitive events at the Tokyo Olympics. Seizing on this opportunity, I declare the launch of the “Ehime Baseball Expo” for the next three years.  My hope that many people will relish the appeal of baseball rooted in Ehime and that this will be passed on to the next generation.

"Kingdom" set to leap ahead, "Ehime Baseball Expo" kicks off!! A wide array of events over 3 years 700 visitors to opening forum

Play ball toward a new start for "baseball kingdom Ehime"! "Ehime Baseball Expo" has got under way for a three-year run to revitalize local communities by staging a wide variety of sport and cultural events under the theme of baseball. An opening forum was held in the Matsuyama Civic Hall on Aug. 26. With baseball-related people associated with Ehime Prefecture present, a dialogue session, a panel discussion and other events took place, giving momentum to the exposition. About 700 citizens, both children and adults, participated in the forum.

Ehime Governor Tokihiro Nakamura, chairman of the exposition's executive committee, delivered an opening speech at the forum. "The history of baseball in Ehime began with haiku poet Masaoka Shiki," Governor Nakamura said. Baseball has become popular rapidly in the prefecture since Shiki, fascinated by the sport, taught it in Matsuyama 130 years ago when he returned to his hometown, the governor said, and "baseball has developed beyond the sphere of sports to reach the realm of culture." Referring to the commemorative 100th National High School Baseball Championship this summer in which the local Saibi High School team performed spectacularly to reach the semifinals, Governor Nakamura heaped praise on the team, saying it brought "thrills, dreams and vitality" to Ehime where the torrential downpours that hit western Japan left their mark.

The speech was followed by a special talk session between sports commentator Atsuya Furuta (formerly with the professional baseball club Tokyo Yakult Swallows) and Governor Nakamura over the topic of "Ehime prefectural people's love for baseball." The dialogue looked back over episodes associated with the invitation of a professional all-star baseball game to Matsuyama (realized in 2002) and the process that led to the Yakult team's annual autumn training camp being held in Matsuyama. The talk was so freewheeling that it wowed the audience.

At an ensuing panel discussion, Mr. Furuta took the rostrum along with manager-cum-infielder Ayumi Kataoka of the nonprofessional "Ibaraki Golden Golds" team as well as Governor Nakamura. Sports journalist Seijun Ninomiya, hailing from Yawatahama City in the prefecture, played the role of coordinator (he is a representative director of the online magazine Sports Communications and an overall supervisor of Ehime's sports magazine "E’dge"). They talked about various topics under the theme of "The power of baseball and regional revitalization -- Possibilities for Ehime as a baseball kingdom."

Mr. Ninomiya noted that two star players who led the early days of professional baseball, Eiji Sawamura (ace pitcher with the Yomiuri Giants) and Masaru Kageura (slugger with the Osaka Tigers), both have connections with Ehime Prefecture. "Ehime is the cradle of professional baseball," he explained. Topics in the panel discussion ranged broadly, including great players and managers nurtured in Ehime, standout games at past National High School Championships at Koshien Stadium such as a legendary rematch in the summer 1969 final between Matsuyama Commercial High School and Misawa High School (Aomori Prefecture) after an 18-inning scoreless draw and the "miracle throw home" in the summer 1996 final; the broadening of baseball's base through "e-sports," in which computer-based gaming is accepted as a sport competition, and how senior generations can enjoy baseball.

Ms. Kataoka played as a member of the Japanese national team that won the first championship at the Women's Baseball World Cup held in Matsuyama in 2008 for the first time in Japan. Matsuyama has been a venue for the All-Japan Women's Baseball Championship every year since 2006. She said Matsuyama "could be called a sacred place" for women's baseball supporting its rising popularity.

Touching on a recent topic associated with Japanese professional baseball, Mr. Furuta cited the need for a "community-based" approach, pointing out that pro baseball teams placing emphasis on efforts to attract spectators to stadiums through such an approach have come to achieve success in business terms. He emphatically asserted that "pro sports clubs exist for the purpose of boosting communities," voicing expectations that such clubs will play a role in regional revitalization at a time when the population is shrinking.

The participants who took the rostrum confirmed with one another that a locally based baseball club loved by regional communities has great power to provide an anchor to young people, deter the outflow of local residents and enliven communities. Given the presence of Botchan Stadium in Ehime, capable of accommodating 30,000 spectators, calls were made one after another for "inviting a pro baseball team to Shikoku by all means." Shikoku, one of Japan's four main islands, comprises four prefectures, including Ehime.

Analyzing the situation, Governor Nakamura said, "It is not impossible to invite a pro baseball club to Shikoku." He added that he will tackle the issue in a proactive manner in partnership with the governors of the other three prefectures in Shikoku. He also spoke of his enthusiasm for the emergence of the prefecture as a "baseball kingdom," saying that by holding the Ehime Baseball Expo, he "would like to convey to many people the heartwarming dramas left by forerunners of Ehime." 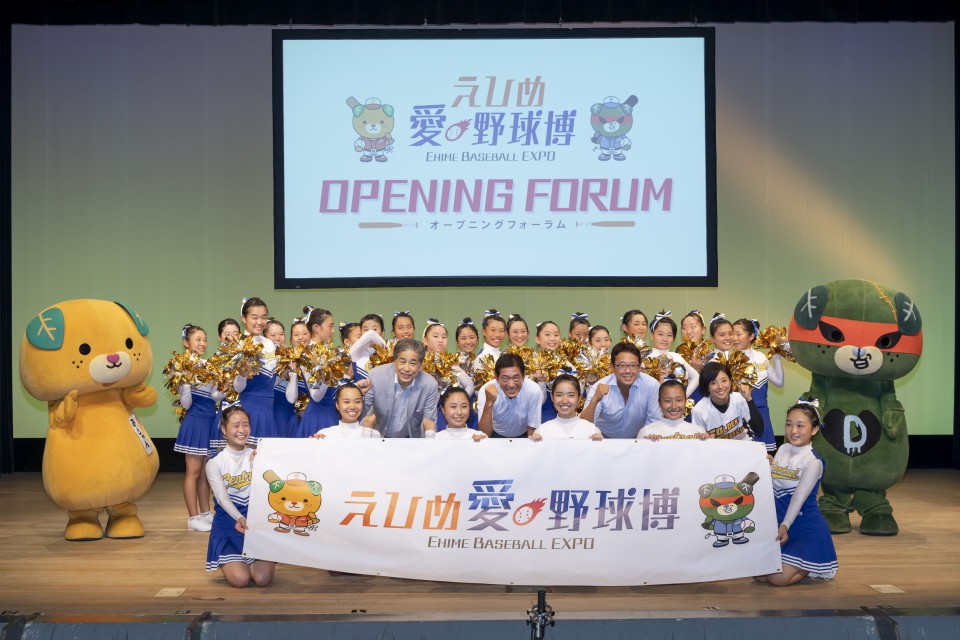 A video promoting the Ehime Baseball Expo was also screened, depicting baseball-loving citizens gathered at Shiroyama Park, where an old Matsuyama municipal ballpark used to stand. Many visitors enjoyed watching a display of panels tracing the history of Ehime and baseball, including those showing how the ballpark gave way to Botchan Stadium, the glittering steps taken by prefectural residents in the development of high school and nonprofessional baseball, and the birth of "yakyuken" (strip rock-paper-scissors).

The forum wound up with an "opening-pitch ceremony." Governor Nakamura declared the Ehime Baseball Expo open, saying "Play ball!" in a loud voice. Together with the guests, he then hurled colored balls in succession toward the audience. Excitement reached a climax in the venue, filled by a wide array of age groups, including boys in baseball uniforms. Participants who caught colored balls exchanged them for balls with guests' signatures, many with beaming smiles.