Pompeo told reporters in Seoul that the United States and North Korea are "getting pretty close" to forging an agreement on a second summit, adding that Trump and Kim are likely to make "substantive progress" toward denuclearization on the Korean Peninsula. 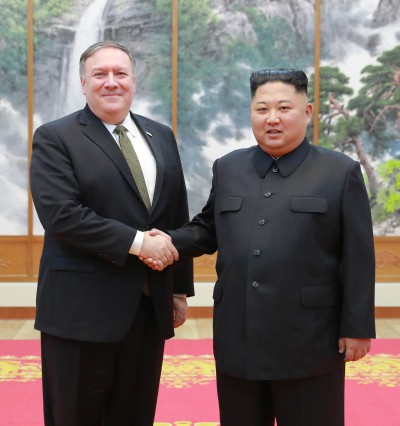 During his talks with Pompeo in Pyongyang on Sunday, Kim "expressed his will and conviction that a great progress would surely be made" at a potential second meeting with Trump, North's official Korean Central News Agency said.

KCNA reported that Kim "explained in detail the proposals for solving the denuclearization issue and matters of concern of both sides," but the news agency did not elaborate.

Kim also told Pompeo that he has thanked Trump for making "sincere" efforts to implement an agreement signed at their first summit, saying U.S.-North Korea talks are based on the "deep confidence" between the two leaders, according to KCNA.

At their historic meeting in Singapore on June 12, Trump and Kim agreed that Washington will provide security guarantees to Pyongyang in exchange for "complete" denuclearization.

Pompeo held "productive discussions" with Kim on Sunday, State Department spokeswoman Heather Nauert said in a statement, adding that they "refined options for the location and date" of the next U.S.-North Korea summit.

Kim also invited inspectors to visit Punggye-ri, North Korea's only known nuclear test site, to confirm whether the country has "irreversibly" shut it down, Nauert said.

In May, North Korea said it had "completely" dismantled the nuclear test site in the presence of foreign reporters.

Experts such as those from the International Atomic Energy Agency, however, were not invited to observe the dismantling, raising fears that the actual condition of the test site after demolition will not be revealed.

Pompeo's trip to North Korea, his fourth this year and first since July, was made to work out the details of the second summit, which might take place by the end of the year. 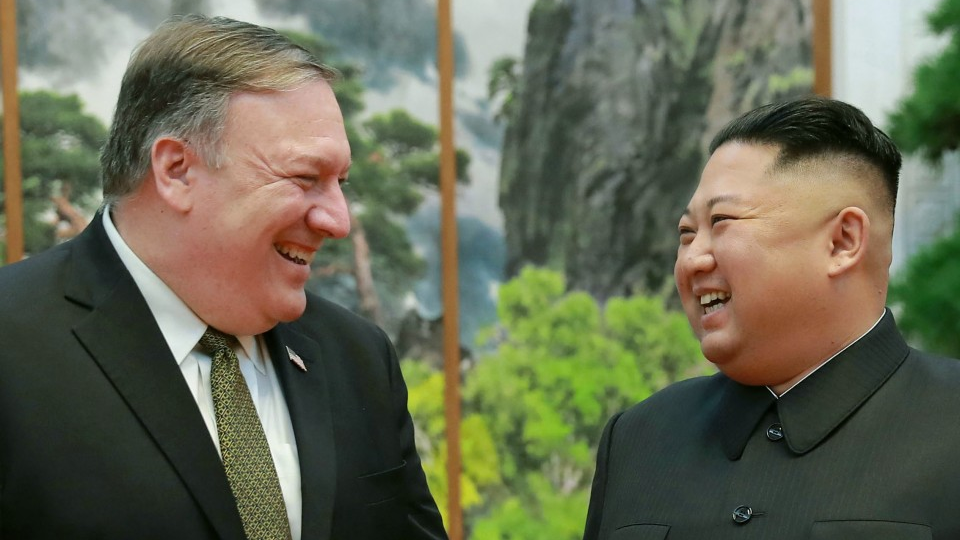 Pompeo planned to visit Pyongyang in late August, but that trip was cancelled by Trump at the last minute amid lingering skepticism about North Korea's intention to abandon its nuclear weapons.

The Rodong Sinmun of the ruling Workers' Party, North Korea's most influential newspaper, on Monday carried a photo of Kim and Pompeo smiling while shaking hands, giving the impression of a thaw in relations between Washington and Pyongyang.

The United States and North Korea remain technically at war after the 1950-53 Korean War ended in a cease-fire.

In the war, U.S.-led multinational forces fought alongside South Korea against North Korea, which was backed by China and the Soviet Union. Hostilities ceased with an armistice agreement signed on July 27, 1953, by the U.N. Command, North Korea's military and Chinese armed forces.

After talking with Kim in Pyongyang for two hours, Pompeo visited Seoul to hold a meeting with Moon on Sunday night. At the outset of his talks with Moon, Pompeo said South Korea is playing an important role in the denuclearization process.

Pompeo also told reporters in the capital of South Korea on Monday morning that he brought up the issue of Japanese nationals abducted by the North in the 1970s and 1980s.

Later in the day, the secretary of state held telephone talks with Japanese Foreign Minister Taro Kono to brief him on his Pyongyang trip.

Speaking to reporters in his ministry, Kono explained that he and Pompeo reaffirmed policy coordination between Japan and the United States toward a nuclear-free Korean Peninsula. Kono did not reveal Kim's response to the abduction issue.

Prior to his phone talks with Kono, he traveled to Beijing and met with Chinese Foreign Minister Wang Yi and Yang Jiechi, the country's top diplomat and a political bureau member of the Communist Party.