Japan to resume U.S. base construction as Okinawa's move suspended

Prime Minister Shinzo Abe suggested Tuesday the government will resume landfill work for the transfer of a key U.S. military base within Okinawa after the land minister decided to suspend the prefecture's recent move to block the work.

"Now that necessary legal procedures have been taken, I think we should respect them," Abe told a Diet session after land minister Keiichi Ishii made the decision earlier in the day in favor of the claim by the Defense Ministry.

The ministry has said further delays in the planned relocation of U.S. Marine Corps Air Station Futenma from a crowded residential area of Ginowan to the less populated coastal district of Henoko in Nago would hurt the Japan-U.S. alliance.

"I'll make every effort to realize the return of (land used by) the Futenma base as soon as possible," Abe added. 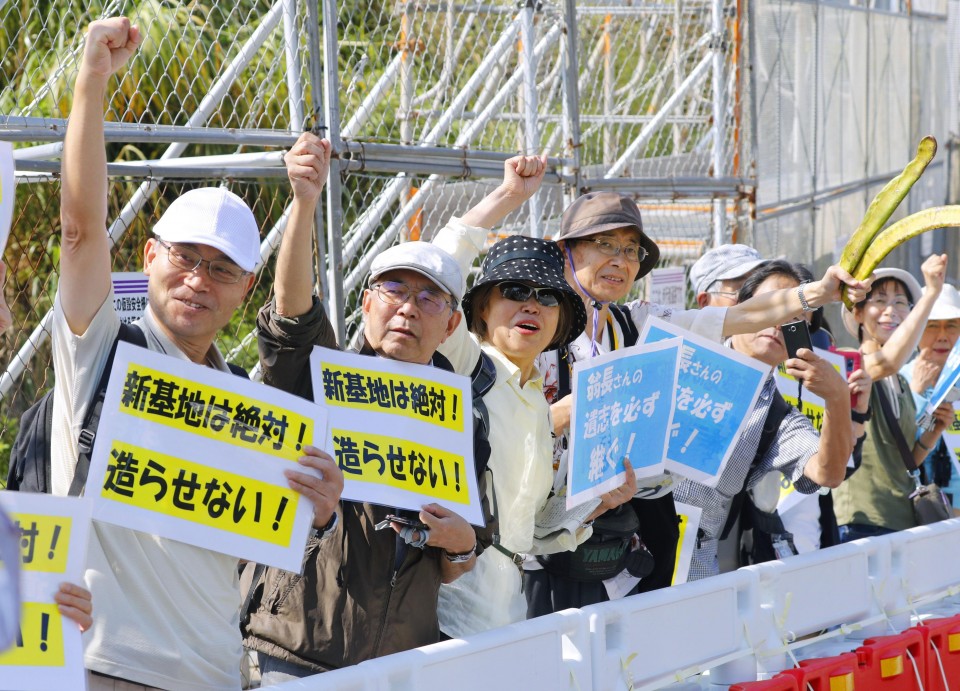 (Antibase protest on Oct. 1, 2018 after Tamaki's victory in gubernatorial election)

Okinawa Gov. Denny Tamaki slammed the decision, saying, "I can only feel strong resentment because of this judgment, which is devoid of fairness and neutrality."

In August, the Okinawa government suspended construction for the base transfer by retracting its earlier approval for the landfill work.

Under their agreement in 1996, the Japanese and U.S. governments have been working to relocate the base within the southern island prefecture despite opposition from many Okinawa people who want the base moved outside the prefecture, where the bulk of U.S. military facilities in Japan are located.

The state and the Okinawa government are expected to enter into a fresh legal battle over the matter, with Tamaki saying the prefecture will consider filing a complaint with a third-party committee tasked with resolving conflicts between the central and local governments.

The construction work can be resumed as soon as an official document containing the land minister's decision is delivered to the defense bureau in Okinawa. The document is expected to be delivered as early as Wednesday, and relocation work can continue even after the prefecture has filed a complaint with a third-party committee.

Deputy Okinawa Gov. Moritake Tomikawa told reporters in Naha the land minister's decision is "unreasonable," arguing the Defense Ministry should not have sought a suspension of the local government's move in the first place under a scheme designed to protect private citizens, not a government body, from a violation of their rights.

The landfill work was approved in 2013 by then Okinawa Gov. Hirokazu Nakaima, but his successor Takeshi Onaga, who died in office in August, revoked the approval in 2015, citing legal defects in Nakaima's decision. In an ensuing court battle, the revocation was found illegal and Onaga was forced to rescind it in late 2016.

But the prefecture again retracted the approval in August after Onaga's death, citing insufficient environmental protection measures and an issue with soft ground on the seabed beneath the construction site, among other issues. It subsequently put the construction work on hold.

On Oct. 17, the Defense Ministry's local bureau asked the land minister to examine the legitimacy of Okinawa's decision based on the Administrative Appeal Act, which provides rules for the appeal and review of government decisions.