Toyota Motor Corp. and SoftBank Corp. said Thursday they have tied up to develop services using self-driving vehicles and other advanced automotive technologies, the latest example of a carmaker joining hands with an IT firm in the fast-evolving auto industry.

In the first alliance between Japan's auto and technology giants, they will set up a joint venture by next March that will aim to offer services such as meal deliveries and hospital shuttles using autonomous vehicles.

SoftBank will own a 50.25 percent stake and Toyota a 49.75 percent stake in the venture named Monet Technologies Corp., which will be capitalized initially at 2 billion yen ($17.5 million), increasing to 10 billion yen in the future, they said.

As a first step, the entity, to be led by SoftBank Chief Technology Officer Junichi Miyakawa, will launch a ride-hailing service in the next fiscal year starting April for local municipalities and firms in Japan. Its services will be expanded overseas in the future.

"The tie-up between Toyota, the world's leading mobility company, and SoftBank, which is focused on artificial intelligence that will redefine all industries including autos, will lead to unprecedented mobility in a new era," SoftBank Group Chief Executive Officer Masayoshi Son said at a joint news conference with Toyota President Akio Toyoda in Tokyo.

"Monet is only the first stage. I am hoping that the collaboration will further expand and deepen into the second, third stages," Son said. 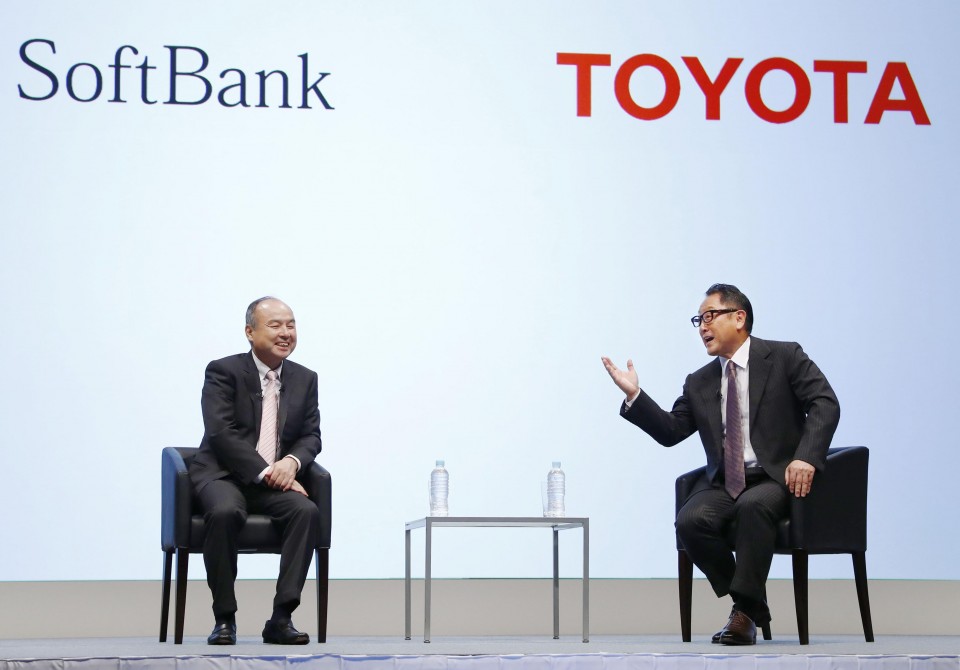 Toyota, meanwhile, is also investing in ride-hailing companies such as Uber and Grab to collect driver data and adapt to global growth in app-based mobility services as demand shifts from owning to sharing cars.

The Toyota-SoftBank partnership is part of a wave of cross-industry alliances, including those involving such IT giants as Apple Inc. and Google LLC, amid an intensified race to develop and commercialize autonomous driving technology.

Honda Motor Co. said Wednesday it will invest $2.75 billion in a project with GM and its Cruise unit to develop an autonomous vehicle. The same day the Renault SA, Nissan Motor Co. and Mitsubishi Motors Corp. alliance said it is exploring a tie-up with Daimler AG of Germany in developing self-driving technologies.

"It is indispensable to ally with other companies...In such circumstances, the tie-up with SoftBank holds an important key," Toyoda said. "The time has come when automakers cannot make self-driving vehicles alone."

Toyota and SoftBank plan to roll out the autonomous vehicle service using e-Palette, Toyota's box-shaped, battery-powered vehicle with no driver seat, which the automaker unveiled in January at the International Consumer Electronics Show.

They are considering services ranging from meal deliveries where food is prepared while the vehicle is on the move, hospital shuttles in which onboard medical examinations can be performed and mobile offices, the companies said.