Remote medical consultation services that connect doctors and patients via smartphones and other devices are spreading across Japan, with their popularity boosted by recent deregulations in telemedicine.

As deregulations in April have allowed health insurance coverage for such consultations, healthcare startups are expected to further accelerate the development of remote healthcare services which utilize artificial intelligence, amid improvements in the accumulation of health data on individuals. 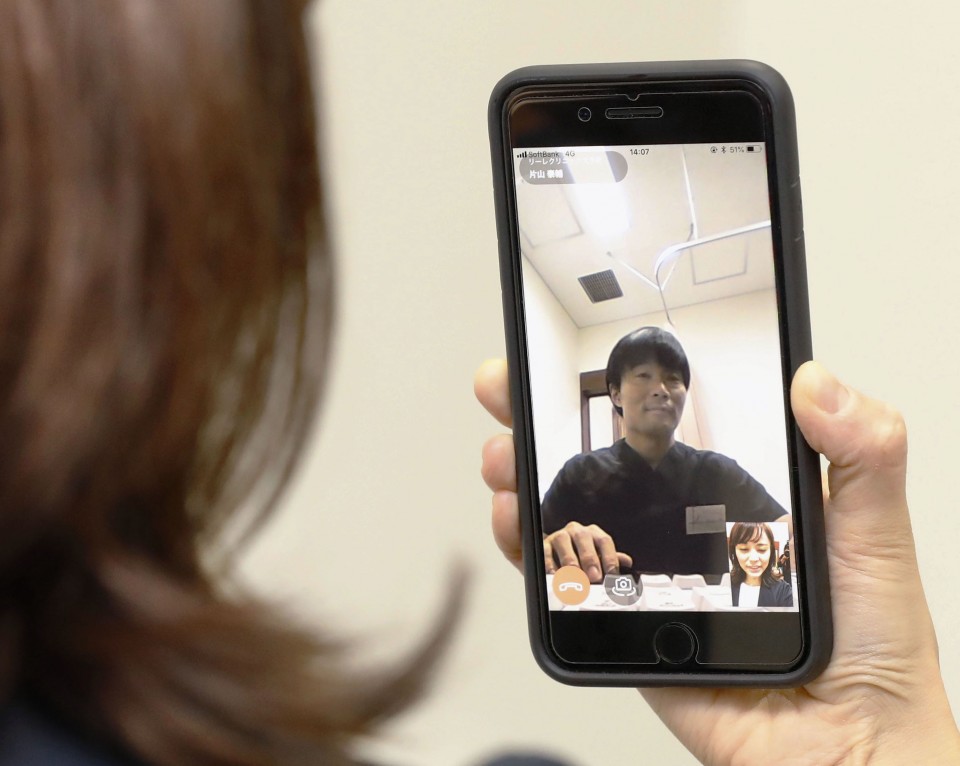 (Communication with a doctor in the smartphone display)

The Health, Labor and Welfare Ministry unveiled its vision for developing and utilizing a healthcare database to support telemedicine applications for remote diagnosis, remote treatment and telesurgery in its proposal "The Japan Vision: Health Care 2035," along with changes in the social environment including a rapidly aging population and the advancement of medical technology.

As an experiment for remote consultations, this reporter tried using the healthcare mobile app "curon," which is operated by Tokyo-based healthcare startup Micin Inc.

After explaining via smartphone that "I have been taking large amounts of painkillers because I have been bothered by frequent headaches and fevers recently," a doctor, who appeared in a videophone call, replied, "You'll lessen the strain on your stomach and kidneys if you change your medication."

The service was convenient since it could be used at leisure without requiring a physical hospital visit. Even the one-on-one dialogue via remote consultation somehow felt closer than a physical face-to-face meeting with a doctor.

Currently, about 650 healthcare institutions use curon, which specializes in consultations for chronic diseases, including diabetes, that require continuous medical care.

In July, the app was upgraded with new functions that allow patients to share information collected at home, such as their blood pressure, amount of exercise and hours of sleep, with doctors. Generally, AI maximizes its potential in data analysis when large amounts of data are collected.

Seigo Hara, a doctor and chief executive officer of Micin, imagines that in the future, AI will advise doctors to help compensate for their differences in ability or lack of experience in certain fields to provide "the best treatment plan for each patient."

AI, for example, might advise doctors about when a patient might likely stop taking medication or appropriate ways for patients to take their meals.

China has seen an advancement in the merger of medicine and information technology. Healthcare and technology company Ping An Good Doctor has about 1,000 doctors who provide 370,000 online remote consultations per day, in cooperation with other hospitals.

By accumulating data of 300 million cases and with the support of an AI-based diagnostic system, the company has been able to provide enormous amounts of medical consultations beyond what could ever be conceived at a conventional hospital.

In a lecture in Tokyo in July, Oliver Wang, chairman and CEO of Ping An Good Doctor, said, "Telemedicine can solve healthcare problems in China, such as shortages of doctors and long waiting lines at hospitals." He stressed his goal of having "a family doctor for every family."

In Japan, curon vies with other remote consultation service platforms, such as MRT Inc.'s Pocket Doctor, and Medley Inc.'s Clinics, among others.

One person with knowledge of the industry predicts "a pivot to the utilization of health data with apps serving as a basis" and the possibility of developing a healthcare service using remote consultations similar to China's system.

Even so, a Japanese expert on healthcare also pointed out issues that can arise with the expansion of remote medical consultations.

"There is a risk that rare diseases, not included in data, can be overlooked," Akira Yokouchi of the Nomura Research Institute said, while at the same time expressing his hope for the improvement of the quality of healthcare.