Prime Minister Shinzo Abe on Monday pledged to pursue an amendment to Japan's pacifist Constitution if he wins another three-year term as leader of the ruling Liberal Democratic Party, a key issue in the party's upcoming presidential election.

Stressing the need for an aspirational target, Abe said in a joint press conference with his only challenger in the Sept. 20 election, former Defense Minister Shigeru Ishiba, "I hope (the LDP) will proceed with discussions (on constitutional revisions) toward the Diet session in the fall."

Abe, who has made the first-ever constitutional amendment one of his signature goals, has proposed clarifying the existence of the Self-Defense Forces in war-renouncing Article 9 to remove the basis of arguments made by scholars that the Japanese troops are unconstitutional.

The article says the Japanese people forever renounce the threat or use of force as means of settling international disputes, and to accomplish that aim, land, sea, and air forces, as well as other capacities to wage war, will never be maintained.

Ishiba put forth a different vision than the incumbent leader, saying, "We should start with what is necessary and urgent."

He said the change of other aspects of the supreme law should take priority, such as giving the government stronger powers to deal with emergencies, including natural disasters and military attacks from abroad.

Ishiba repeated his claim that a referendum on proposed constitutional revisions should not be held without the public better understanding the issue. Amending the supreme law requires approval by two-thirds majorities in both chambers of parliament, followed by majority support in a national plebiscite.

The press conference effectively marked the start of campaigning for the LDP leadership election, which will decide whether Abe will remain as Japan's prime minister.

The party had postponed the joint news conference and speeches by Abe and Ishiba due to a deadly earthquake that hit Japan's northernmost main island of Hokkaido last week. The two filed their candidacies on Friday. 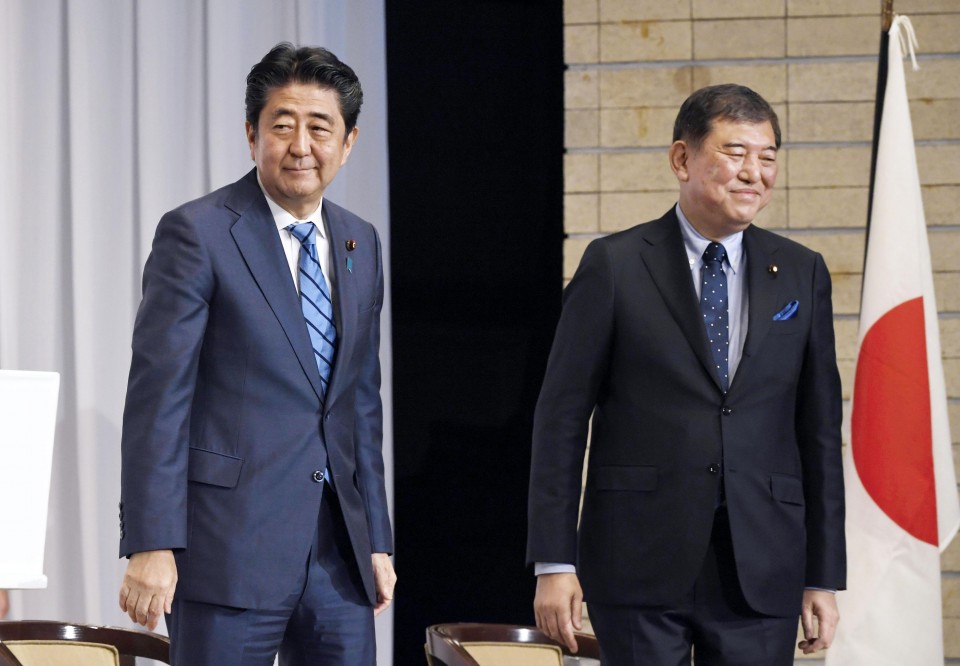