After its proposal to ease the IWC's decision-making rules was voted down in an annual meeting on Sept. 14, Japan was "obliged to seriously think about our status at the IWC and also seriously examine every possible option for achieving sustainable use of whale resources," Hideki Moronuki told a press conference.

"If we could have the opportunity to discuss materialization of IWC reform soon, I think it's very good," Moronuke said at the Foreign Correspondents' Club of Japan. But he also said "Japan does not have any intention to have prolonged discussions on IWC reform."

Japan's past attempts to resume commercial whaling of relatively abundant whales such as minke whales have always been stymied by anti-whaling members, such as Australia and New Zealand.

Attempts to compromise over the last 30 years have "all failed," said Morunoki, due to the "inflexible attitude of anti-whale countries."

Calling the IWC "dysfunctional" for being unable to reconcile opposition over the resumption of commercial whaling, which Japan argues is a "sustainable use of whale resources" and recognized by the IWC rules, Moronuki said "now is the time to change the situation."

"I think that by changing the decision-making system, there might be a so-called paradigm shift and the mindset of those two groups might be altered. They might start to feel they can coexist in the IWC," he said. "Therefore we made the IWC reform proposal at the last IWC meeting."

At this year's annual meeting in Florianopolis, Brazil, Japan proposed making it easier to establish whale sanctuaries where whaling is banned in an attempt to make an overall proposal appealing to anti-whaling members. 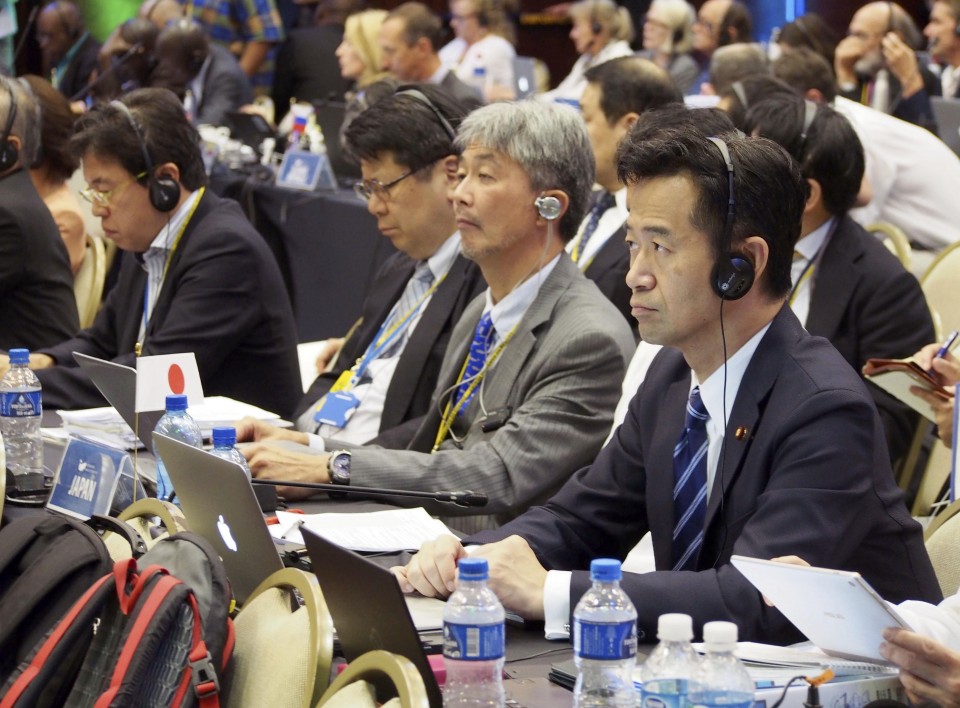 (The Japanese delegation at the IWC meeting on Sept. 13)

Currently a three-quarters majority of IWC members is needed to set a catch quota or establish a sanctuary. The Japanese proposal would have lowered the hurdle to a simple majority.

Although 27 countries supported it, 41 voted against.

While Japan halted commercial whaling in line with a moratorium adopted in 1982 by the IWC, it has hunted whales since 1987 for what it calls "scientific research" purposes. But this has been criticized internationally as a cover for commercial purposes.

Japan also suggested in 2007 that it might withdraw from the IWC, in protest at the ban on commercial whaling, but it was later persuaded by the United States and other countries to remain in the organization.