To most people who live in New York, this Saturday marked the kick-off of fall with its drenching rain and chilling temperature. To post-rock band ‘toe,’ it was the day that they knew for sure how much their American fans love them.

Yes, I know it was the third time that the band had come to the United States, but I guess people always have secret concerns before they do something new, something big, right? As guitarist Hirokazu Yamazaki told us, "I've been wondering, you know? It's a Saturday night and people have all kinds of entertainment to choose from, don’t they? They can hang out with their girlfriends. They can go to see a movie. They can go to a bar. What's so special about us that people would want to see us on such a rainy day? Every time I think about it, I appreciate the folks who bought our tickets from the bottom of my heart."

Yamazaki needn’t have to worried at all. While standing outside of the venue waiting for their tour manager Katsu to bring us inside for the interview, we met two guys, Deslin and Chris, already trying to form a line. They too have a band, they claimed. Toe was one of their huge influences as early as 10 years ago when they first started listening to such music.

I saw the two enthusiastic guys again after the show. They looked stoked to have finally seen their dream performance and kept asking whether the band would come out later.

"We are not like crazy fan boys you know." Deslin said, "We just want to give them a big hug (to demonstrate, he hugged the air), take a deep bow and say “kudos”." 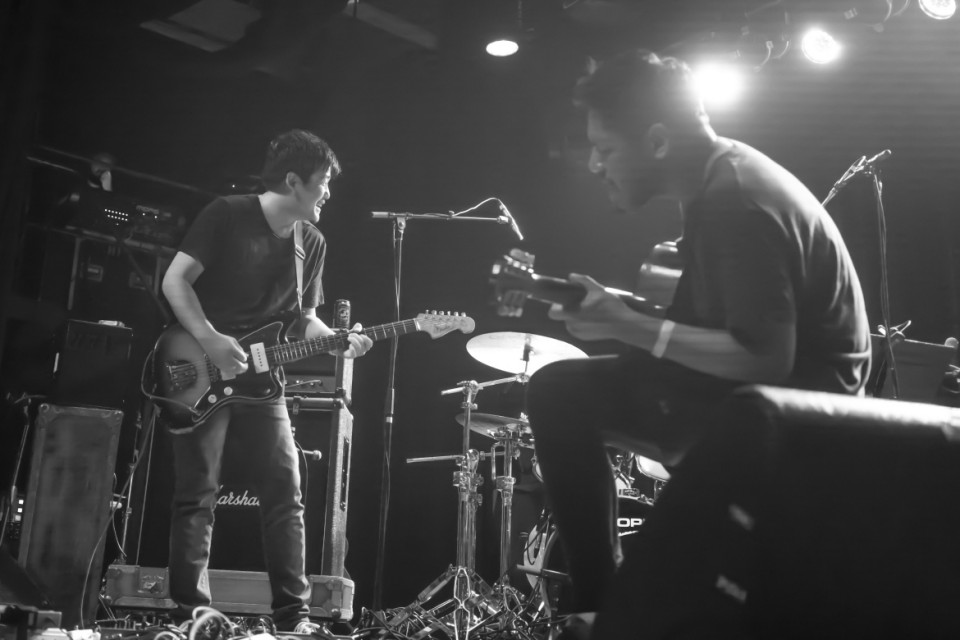 Some one thousand people came to see the show on Saturday (September 8).  The renowned Warsaw venue was packed from the front row to the very far end of the side walls. I had overheard people chatting excitedly about how they found out about toe and what they thought of the new EP ‘Our Latest Number’ before the show. These people must have been delighted to hear the band starting their performance with all the new songs from this EP.

The band’s live arrangement sounded very different, however -- so vivid and emotional that it has made it difficult for me to go back to simply listening to the record.  Drummer Takashi Kashikura was no doubt the star of the show, playing like a thousand-armed Buddha. Every time he expanded the simple beats into an awe-inspiring saga, the audience would explode.

Not that this overshadowed the other instruments.  Kashikura’s ever-present drums just wrapped up all the sounds and glued them together as one. Even the cheers made by the jubilant crowd blended in and contributed to the ecstasy.

In contrast with this immense collective power were the band's surprisingly modest, sincere personalities. Off stage, they looked just like your dads. They would light a cigarette, wander about and say hello to the opener's French girlfriend who helped with the merchandise after sound check, then just stare at the rain.

During our interview guitarist Yamazaki got a bit shy because he did not speak English but was excited when he happened to understand some words from me and tried really hard to answer back in the same language without our translator's help.

Before starting their North American tour, toe had just finished a series of festival gigs in Asia alongside fellow post-rock bands that included Envy and Lite. Yamazaki said he wanted to do something similar here in the U.S. but the budget could be a major obstacle.

"It costs so much to ship our equipment and gear to foreign countries. In Asia it's easier but America is so far away and thus very expensive."

Festival tickets are usually cheaper than the sum of one-man show tickets for all the bands who participate, but the costs do not decrease simply because it's a festival. This is also one of the reasons that most festival organizers don’t have the incentive to invite foreign bands outside of the big names.

On the latest EP, ‘Our Latest Number,’ Yamazaki thought it was interesting that in English, the Japanese word ‘saishin’ translates into ‘the latest’ instead of ‘the newest.’ In Japanese, the word ‘latest’ has rather negative connotations. What toe wanted to display, he said, was a laid-back vibe that this EP was simply a few songs that they wrote recently.

"Now that we have a few new songs, we want to share them with you. Please enjoy."

When we asked why the drums sounded slightly down-played in recent works, especially in the EP, Yamazaki looked confused.

"It might have been produced in that way for the record I guess, but we did not intentionally do that. Every song has its own elements and structure, and it could be just a coincidence that the drums are not as significant in these recent works. But please come see us play live. We have different arrangements for every song and the drum part will still be impressive." 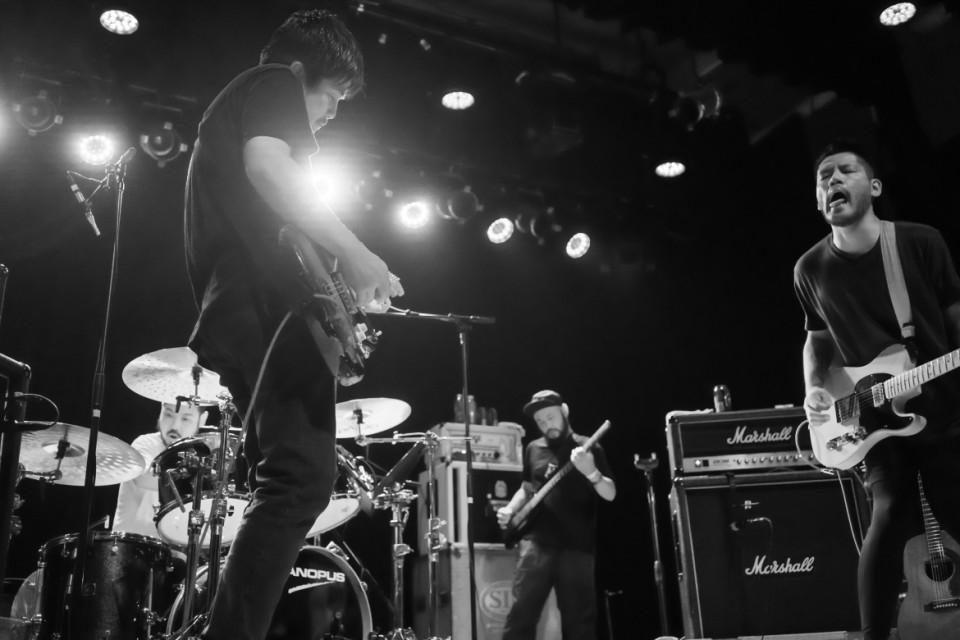 The music video for new song ‘The Latest Number’ has caused some heated discussion within the fan community online. The video features a slideshow of pictures of young Japanese girls hanging out and having fun. Some people saw the video as deliberately kitschy and were curious about why. Although shooting for the video was outsourced in toe's case, we asked Yamazaki for his opinions, as he is, in fact, a big fan of the director, Okamune Shugo, even showing us a few of other short films that the director hand made, all in a similar style.

"For the song (The Latest Number) specifically, I think it has more or less become the soundtrack of the slideshow, instead of the image being an extension of the song."

He told us the girls in the video are not models but normal people who are friends with the director.

"Men at our age are simple, you know? Watching a bunch of young, cute girls enjoying themselves makes us feel fulfilled and energetic. It's really nothing weird. Youth is beautiful."

Like most indie musicians, all four members have other vocations outside of playing with toe. Bassist Satoshi Yamane owns two clothing fashion brands. Drummer Kashikura is also well known for playing in another band ‘the hiatus’ and for the famous pop singer, Kaela Kimura. The band’s other guitarist, Mino Takaaki, is a professional sound engineer. Yamazaki himself is an interior designer whose most renowned works include Anteroom KYOTO, a hotel that hosts avant-garde gigs and art exhibitions, including ‘David Bowie Is.’

We asked Yamazaki how this job, which requires a different kind of creativity, impacts his music writing. His reaction was flat-out, "It's really not that complicated. Traditional Japanese culture judges 'musician' as a decent job you know? It's been hard on people like us. I gotta support my wife and kids. I work as an interior designer for money, that's all."

The band wrap up their ‘toe_North America 2018’ tour in Los Angeles on Friday. 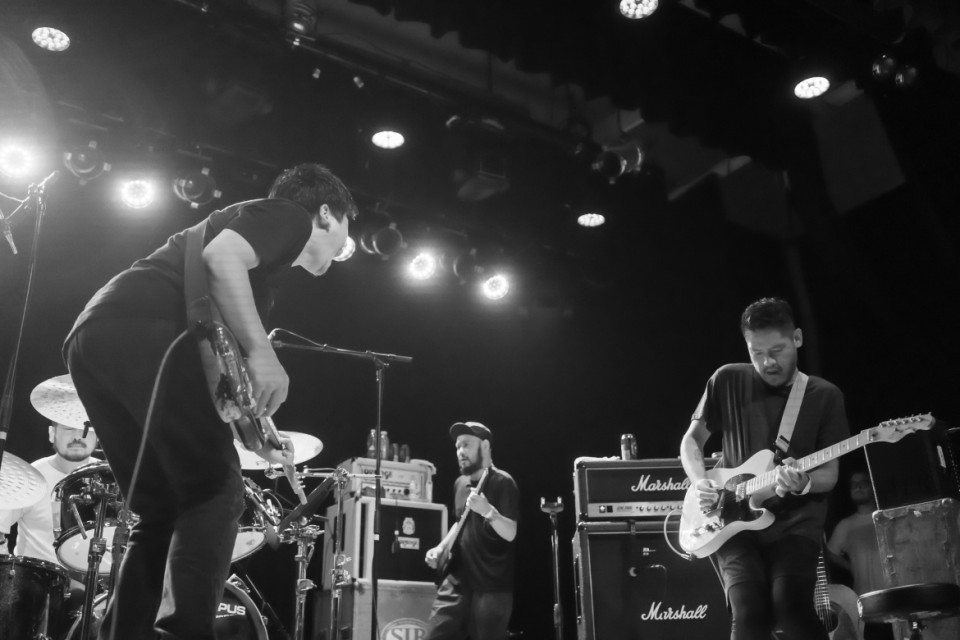