Death toll rises to 19 after quake in Japan's Hokkaido

Eighteen people have been confirmed dead and two others show no signs of life in Hokkaido, the local government said Friday, a day after a magnitude-6.7 earthquake struck Japan's northernmost main island.

About 390 others are also said to have been injured as a result of the temblor, with rescue workers continuing their search for survivors as 19 people remain unaccounted for.

Meanwhile, the central government said nine people have been confirmed dead. After earlier announcing that 16 people had been killed in the quake, Chief Cabinet Secretary Yoshihide Suga revised the figure to nine and said another nine are feared dead but have not been officially declared as fatalities. Another 22 people are still missing.

Police, firefighters and Self-Defense Forces personnel used heavy machinery and manually combed through rubble in the town of Atsuma where massive landslides buried a number of homes. All of the missing people were located in Atsuma, according to the government.

Heavy rain was expected in Hokkaido through Saturday, and the Japan Meteorological Agency warned of more mudslides, saying earthquakes of a similar intensity could occur again in the region. More than 100 smaller temblors have been recorded in the region since the major quake, according to the agency. 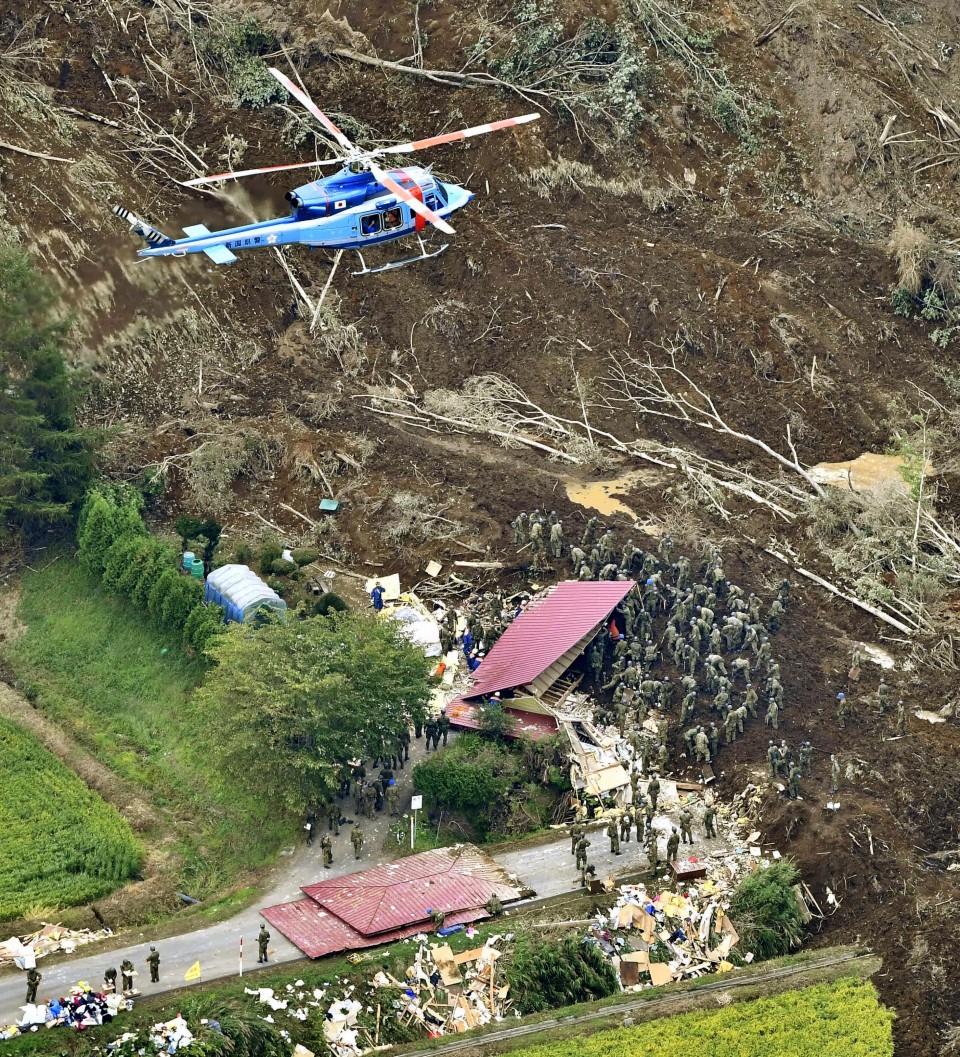 The quake caused a prefecture-wide blackout Thursday and left many homes without water, while over 10,000 people were forced to spend the night at evacuation centers.

"I've been living in Atsuma all my life but I have never experienced such a quake. I came here because I'm scared of aftershocks," said Toyokazu Kurashige, 79, who was staying at the evacuation center with five family members.

Kurashige was among more than 100 residents of the hard-hit town who took refuge at a shelter adjacent to the town office. The facility had no water service and evacuees slept under blankets on thin mattresses in an open space without any partitions.

The temblor registered the highest reading of 7 on the Japanese seismic intensity scale in Atsuma and upper 6 in the neighboring town of Abira, both southeast of Sapporo. Smaller aftershocks have continued in the prefecture.

The SDF boosted their presence to 24,000 personnel, with the government saying it will also call in reserve members.

Power has returned to more than half of the 2.95 million Hokkaido households affected, according to the industry ministry. Power supply to the prefecture is expected to reach 3.6 million kilowatts on Saturday, just short of the weekday peak of 3.8 million kilowatts. 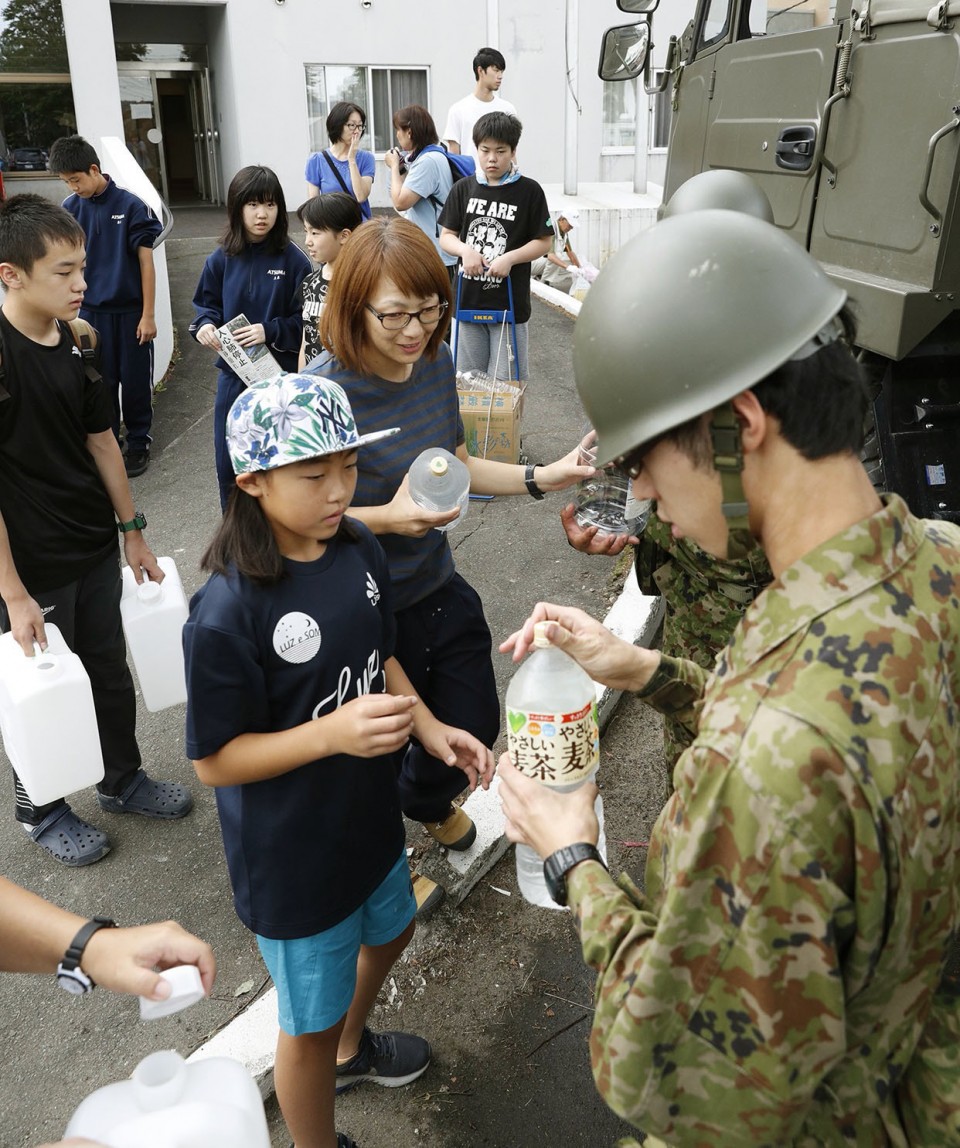 (Evacuees receive water at a shelter in Atsuma)

Running water was cut off at more than 66,000 households at their peak, but the figure has since dropped to around half as of noon Friday, according to the health ministry. People formed long lines at emergency water stations set up in many areas.

The ministry also said 191 hospitals were still without power as of noon Friday.

Transportation is slowly becoming available in the region, with some train and air services expected to resume during the day.

Hokkaido Railway Co. restarted its bullet train services, but the operator canceled its local express trains for the day.

New Chitose Airport also restarted services for domestic flights to and from the main gateway to Hokkaido, although many people were unable to secure seats. The airport operator said it will reopen the international terminal from Saturday morning.

"I was told all the flights are booked," said Masahiro Torimoto, 49, who was scheduled to travel to Fukuoka, southwestern Japan, to take part in a national softball tournament.

In Sapporo, a city of some 1.96 million residents, neon and traffic lights were out Thursday night and parts of its roads caved in, while long lines formed in front of a limited number of convenience stores and gas stands that had reopened.

"I can't use anything at my all-electric home. I can't even flush a toilet so I have to use my neighbor's," said a 39-year-old woman in the city. 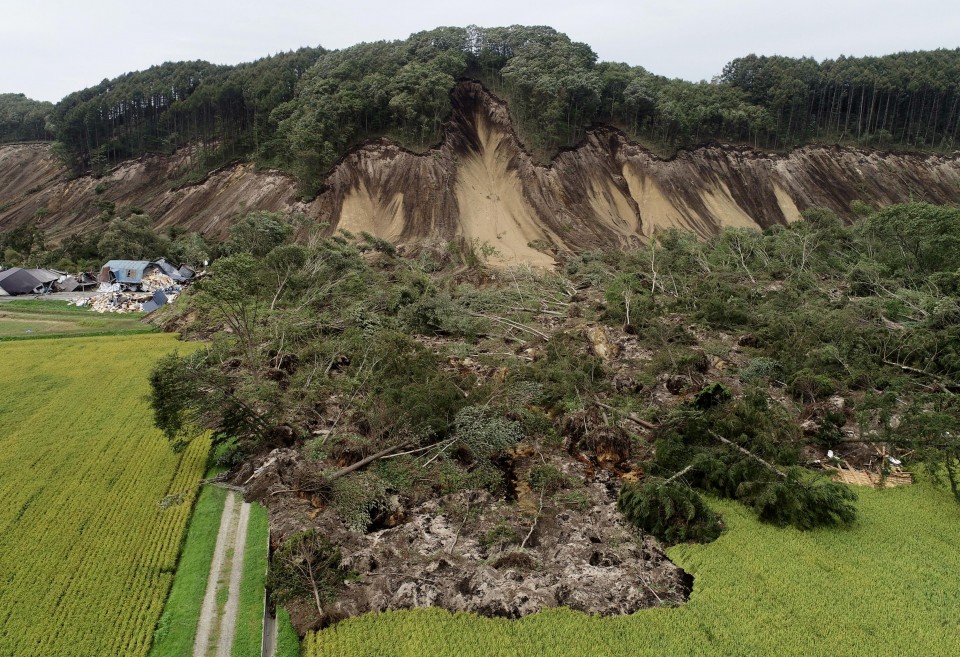