Kansai International Airport will resume domestic flights Friday after it was closed in the aftermath of a powerful typhoon, the government said Thursday.

International flights will also restart as soon as the airport in Osaka Prefecture is ready, Prime Minister Shinzo Abe told a meeting.

Chief Cabinet Secretary Yoshihide Suga said at a press conference that transport minister Keiichi Ishii will outline a more detailed plan on Friday on how the airport will resume broader operations.

An official at Peach Aviation Ltd. said the Japanese low-cost carrier plans to resume operations at the airport Friday, beginning with several flights.

One of the two runways and the basement floor of a terminal building at Kansai airport, which is located on a manmade island in Osaka Bay, were flooded Tuesday by high storm tides driven by Typhoon Jebi.

Japan's third-largest airport is a key gateway to the Kansai region that includes Osaka, Kyoto and Hyogo prefectures, and has seen growing numbers of foreign travelers from Asia. On an average day, around 80,000 travelers use the airport.

Airport officials had suggested it may take about a week to return to full operations, if damage to its facilities is serious. But Osaka Gov. Ichiro Matsui said Thursday it could take "months" before the airport is fully restored.

Matsui called for nearby airports -- Itami airport in Osaka Prefecture and Kobe airport in Hyogo Prefecture -- to extend their operation hours and take some of the traffic scheduled to land at or depart from Kansai airport until damage is repaired.

In response, Kobe Mayor Kizo Hisamoto said at a press conference that the city hopes to give necessary help in cooperation with Osaka.

Concerns have been raised about the impact of a prolonged closure of the key transport hub on business, trade and tourism.

Travel agencies hailed the partial reopening of the airport. But an official of Panasonic Corp., which ships products overseas from the airport, said the situation remains difficult as it still needs to find transportation alternatives as long as international flights remain cancelled.

The airline industry faced an additional blow on Thursday as New Chitose Airport near Sapporo in northern Japan was closed due to a power outage and damage caused by a strong earthquake, with a magnitude of 6.7 that destroyed houses, cut off roads and caused massive landslides in Hokkaido.

A bridge providing the only road and rail access to the airport from the mainland was severely damaged by a tanker that smashed into it after being ripped from its mooring by the strong winds and high waves.

The typhoon killed 11 people and injured over 400 across western Japan. 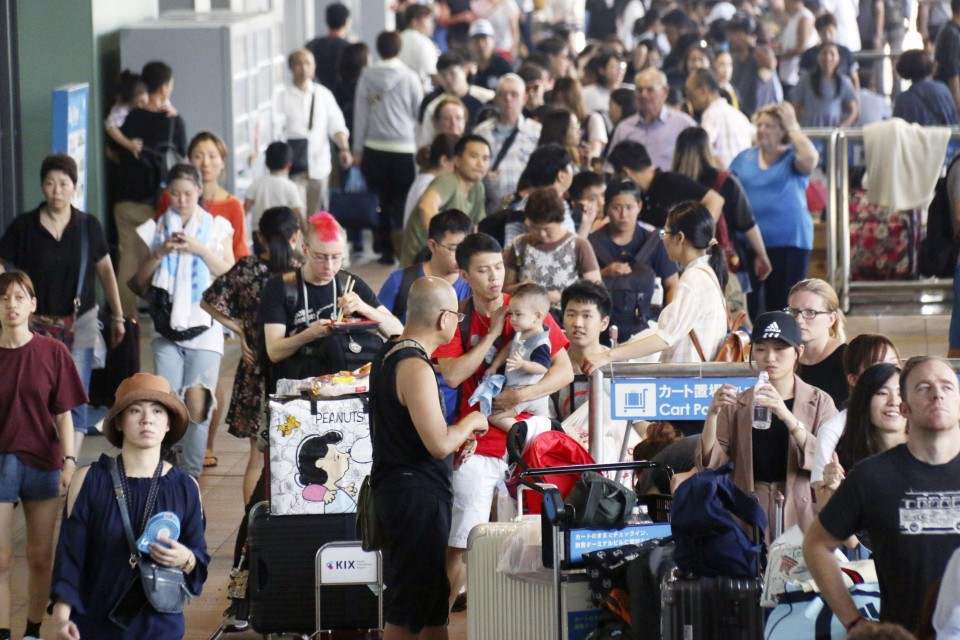