Hiroshima marked the 73rd anniversary of the U.S. atomic bombing on Monday, with its mayor making a fresh call for a world without nuclear weapons through dialogue, but stopping short of explicitly urging Japan to join a global nuclear weapons ban treaty.

Despite some expectations of progress toward nuclear disarmament in recent years, Mayor Kazumi Matsui warned of the re-emergence of tensions over nuclear weapons seen during the Cold War and sought rational actions by global leaders. 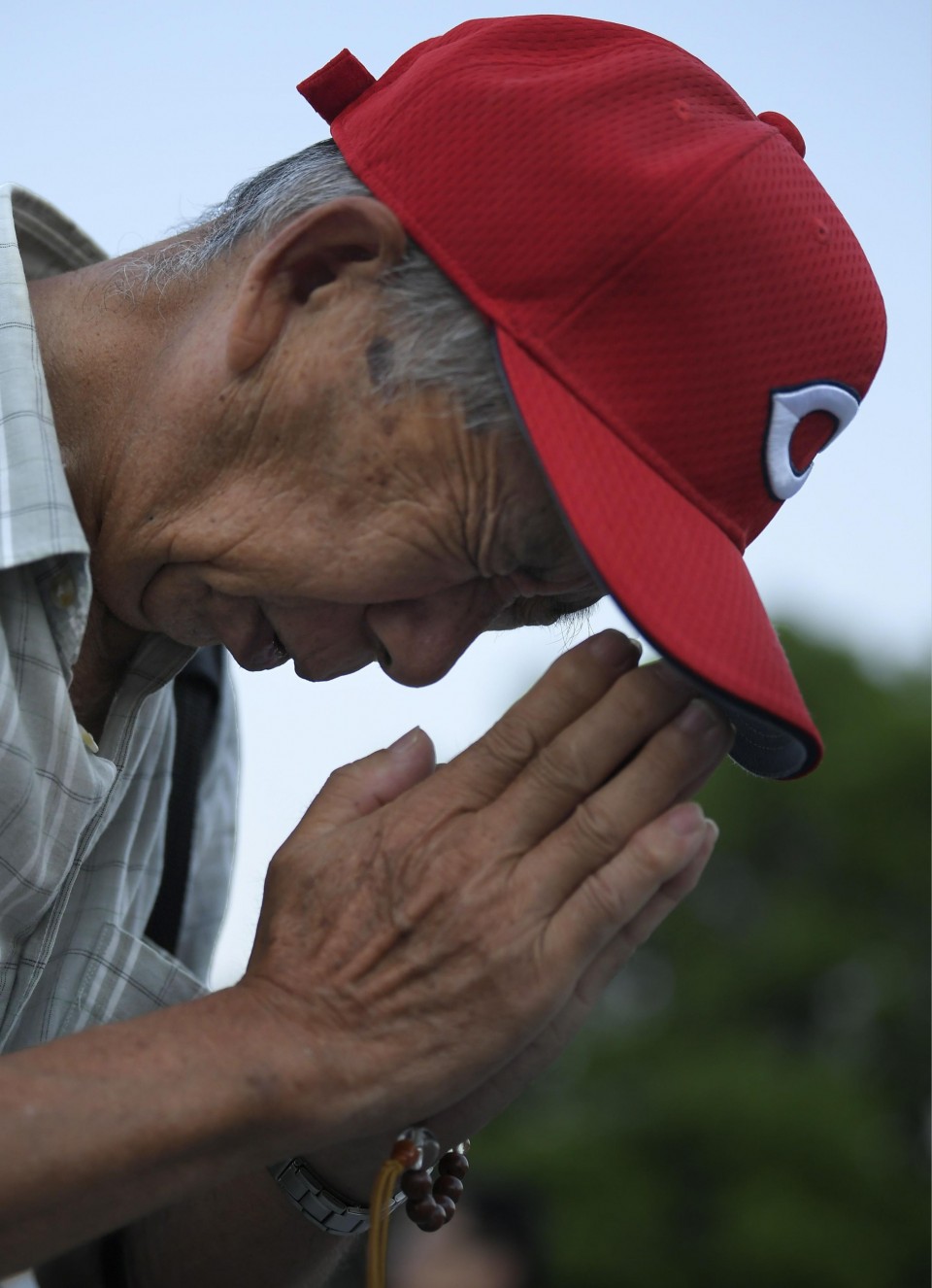 "If the human family forgets history or stops confronting it, we could again commit a terrible error," Matsui said at a memorial ceremony to remember the atomic bombing.

Japan needs to lead the international community toward "dialogue and cooperation for a world without nuclear weapons," the mayor said at the ceremony attended by Prime Minister Shinzo Abe, who later said his country's position not to join the treaty remains unchanged.

At the Peace Memorial Park, a moment of silence was observed at 8:15 a.m., when the "Little Boy" uranium-core atomic bomb dropped by a U.S. bomber exploded above Hiroshima on Aug. 6, 1945. It killed an estimated 140,000 people by the end of that year.

The 73rd anniversary comes after Pyongyang's promise of a complete denuclearization of the Korean Peninsula grabbed attention following the historic U.S.-North Korean summit in June.

Expressing hope that the easing of tensions on the Korean Peninsula will continue through dialogue, Matsui called on global leaders to make an international treaty comprehensively prohibiting nuclear weapons a "milestone" toward the goal of ridding the world of nuclear arsenals.

Currently, more than 14,000 nuclear weapons are estimated to still exist in the world. 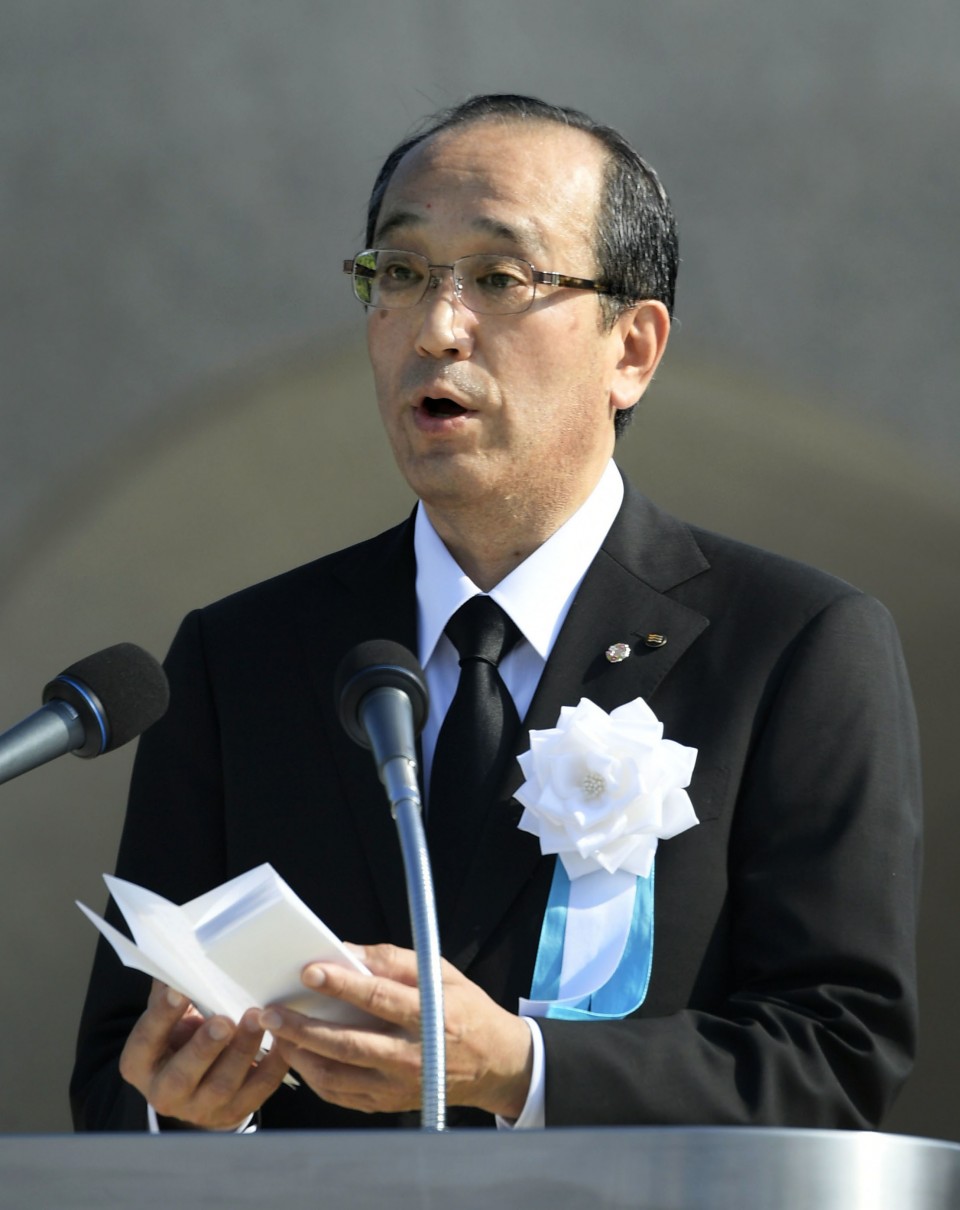 For years, Japan has relied on U.S. deterrence and did not sign the Treaty on the Prohibition of Nuclear Weapons that referred to the suffering of hibakusha, or atomic bomb survivors. The pact was adopted in July 2017. Later that year, the International Campaign to Abolish Nuclear Weapons, or ICAN, which led efforts to campaign for the treaty, won the 2017 Nobel Peace Prize.

The mayor made the Peace Declaration before representatives from 85 countries and the European Union. The United States, a major nuclear power whose president called for modernizing its nuclear arsenal, sent its ambassador to Japan to the annual ceremony for the first time in three years.

"Certain countries are blatantly proclaiming self-centered nationalism and modernizing their nuclear arsenals, rekindling tensions that had eased with the end of the Cold War," Matsui said.

The role Japan can play as the only country to have suffered atomic bombing has come into sharper focus with the world still far from being nuclear-free.

Speaking at the ceremony, Abe said Japan will try to act as a bridge between nuclear powers and non-nuclear states and lead international efforts for a world without nuclear weapons.

"Maintaining its three non-nuclear principles, our country is determined to make strenuous efforts to serve as a bridge between both parties," Abe said.

U.N. Secretary General Antonio Guterres said in his message the legacy of Hiroshima is one of "resilience" and sought continued moral support from hibakusha survivors.

As of March, the number of hibakusha stood at 154,859. Their average age is at 82.06, highlighting the challenge facing Japan of passing down their experiences to future generations.

Atomic bomb survivors and many visitors prayed for peace at the Peace Memorial Park near Ground Zero under the scorching summer heat.

Tomie Makita, 88, of Hiroshima pays a visit to the park every year on Aug. 6 to remember the bombing that claimed the lives of her friends.

Makita said for a long time the experience of the bombing was "so painful" to recall, but from around the 70th anniversary of the attack she has started to feel the need to share her experience with her grandchildren.

"They can't imagine what it was like because it feels like a different world, but it's important to keep telling them," Makita said.

Another Hiroshima resident Yoshinobu Ota, 71, was born after the bombing. But he knows its impact from his firsthand experience of taking care of his late mother who lost her eyesight and was severely burned due to the bombing.

"My mother used to say an atomic bomb instantly destroys people's lives," Ota said. "As long as there are countries possessing nuclear weapons, they can be used any time. I want Japan to work toward eliminating nuclear weapons," Ota added. 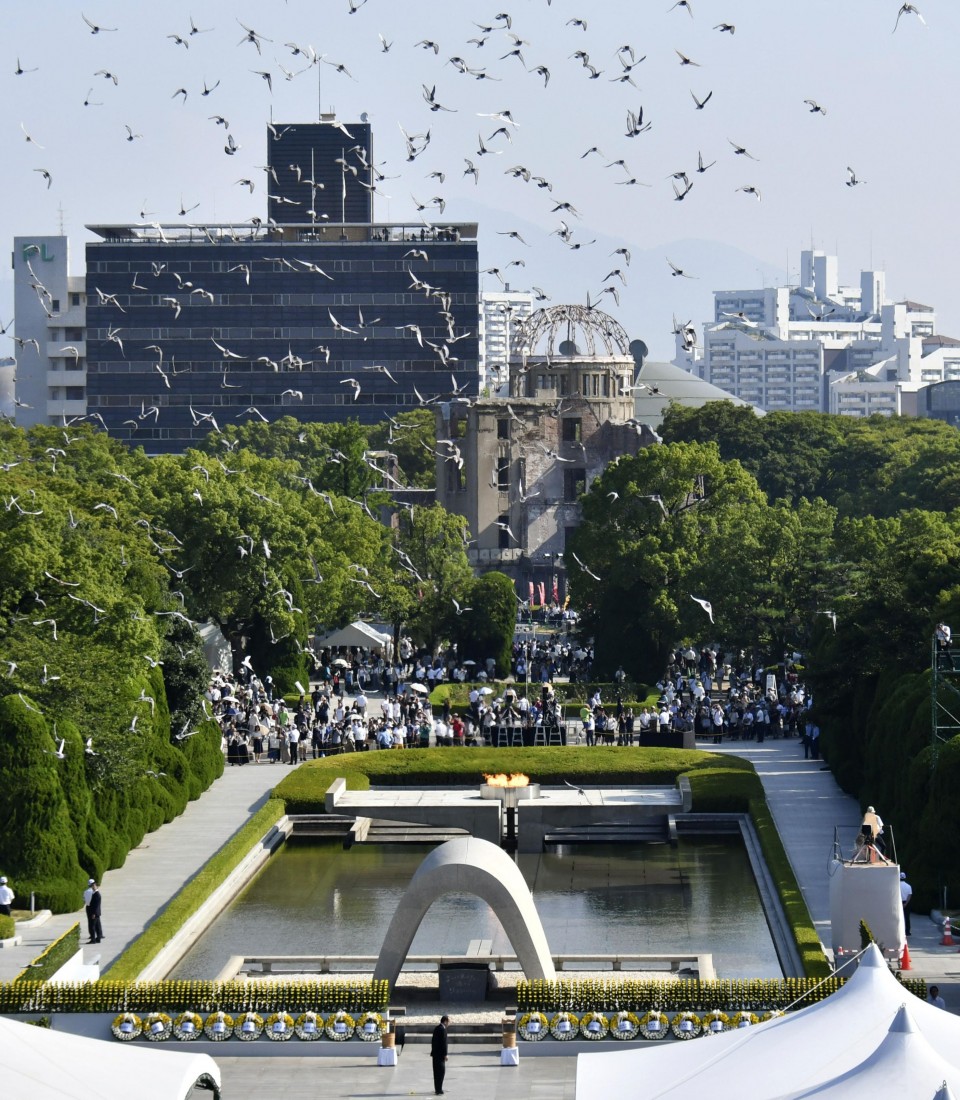