The Japan Football Association on Thursday asserted its days of reliance on foreign managers was over by naming Olympic head coach Hajime Moriyasu to also manage the senior national team.

The 49-year-old Moriyasu, who in October took over as head coach of the Japan men's team for the 2020 Tokyo Olympics, fills the void left by Akira Nishino after the Samurai Blue's round-of-16 defeat by Belgium in this summer's World Cup finals in Russia.

"To be the Olympic manager and then to take on this, is an impossibility for one person. But with the support of the JFA and the many people of talent in Japan, what is impossible can be made possible," Moriyasu told a press conference where he was introduced by JFA President Kozo Tashima and Technical Director Takashi Sekizuka.

Since 1998, the JFA had turned to a foreigner to manage the national team at the start of every World Cup cycle. But in naming Moriyasu, Tashima and Sekizuka hammered on nationalistic talking points, the importance of doing things "the Japanese way" and capitalizing on Japanese qualities.

"Even during the time Nishino was the technical director, we've considered that we should have a manager with a thorough knowledge of the Japan squad and the Japanese system," Tashima said. "The J-League has been in existence for 25 years. We've been to six World Cups, so it's appropriate for us to have a Japanese manager who was nurtured in this environment. And moving in that direction, we selected our next manager."

Tashima and Sekizuka both commented on the importance of generational change and having a national team manager who could manage a seamless transition into the next World Cup cycle with many of the top team's stalwarts getting on in years.

"Being the Olympic manager is such a great honor and a heavy responsibility. Being in charge of the national team takes that from 'heavy' to 'ultra-heavy,' and I wondered if I was up to it," Moriyasu said.

"In the end, doing both can open the door to rejuvenating not just the national team but the world of Japanese soccer. For one person this is impossible. But as I considered the JFA's zeal in supporting me and understanding the kind of help I could draw on, I was at last able to get my head around it." 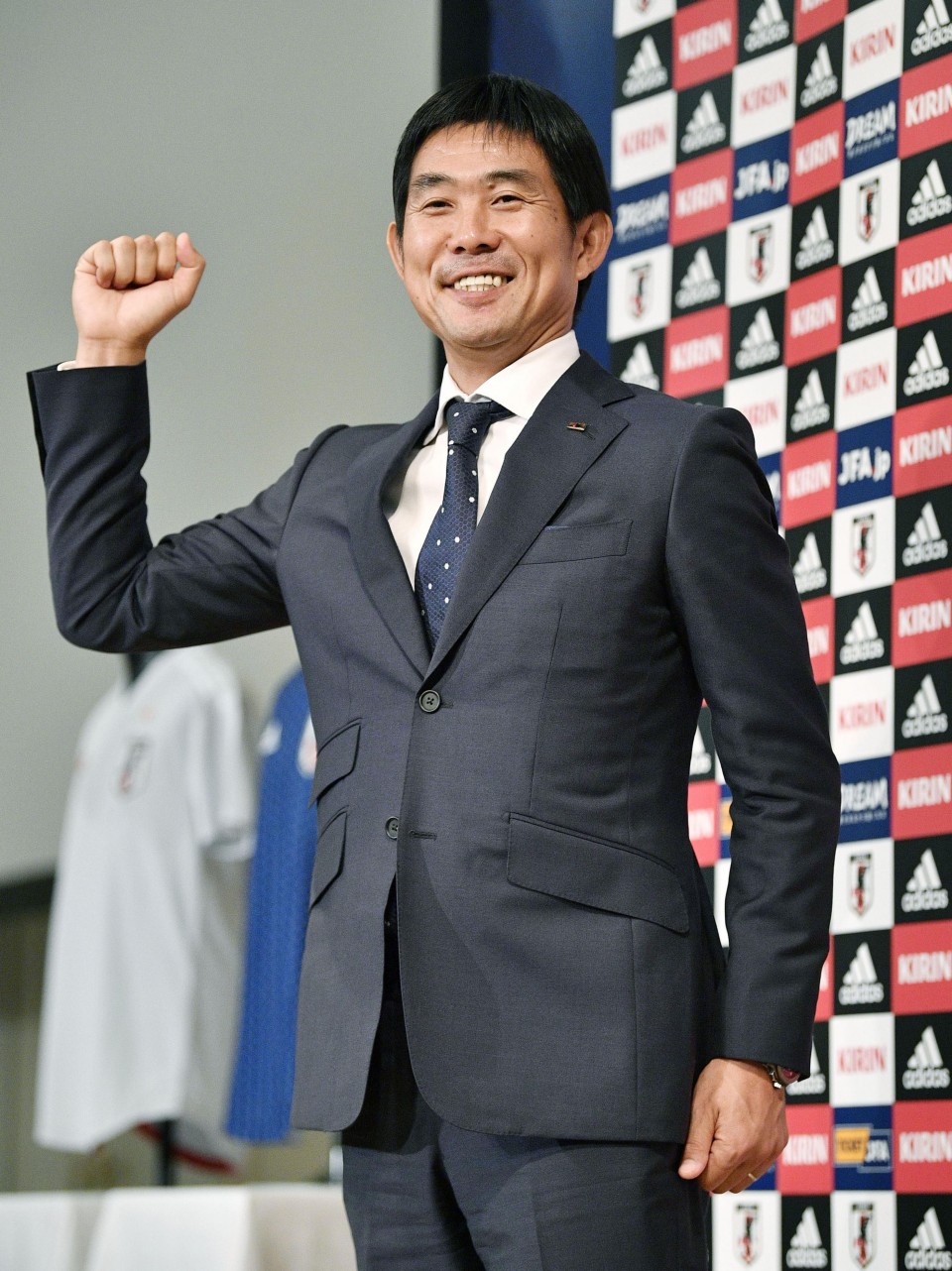 Introduced as a man who had taught soccer at every level, from preschool to the highest professional level, Moriyasu took time to honor the people he said put Japanese soccer on the map.

"Many people before me have passed this torch on to me," he said. "I am here only because of the sacrifice of all those people with jobs and families who dedicate themselves to teaching the game in Japan. It is because of those countless people that we can see the superb players Japan has at its disposal."

"As a manager, I cannot forget that and am now carrying the weight of representing them on my shoulders. Now I feel that responsibility, and I will give my all to pass this torch on to the next national team after me, the next manager the next generation of Japan's soccer community."

Moriyasu also paid tribute to Nishino, whom he coached for at this summer's World Cup. Nishino took the reins following the shock dismissal of predecessor Vahid Halilhodzic in April, two months before the World Cup, and his brief run as Japan head coach ended in July when his contract expired.

"The manager before Nishino, Halilhodzic, said Japanese players were lacking in certain areas," Moriyasu said. "Nishino was superb. He made use of those things Japanese are good at as he studies ways to address deficiencies. In that way, he really built a team concept that was suited to Japanese."

"Having received the baton exchange from manager Nishino, I want to compete against the world in a Japanese way, drawing out Japanese qualities, fighting as not just the national team but as all of Japan."

A member of the national team that missed out on a World Cup spot by drawing with Iraq in the qualification round in 1993, Moriyasu coached Sanfrecce Hiroshima to three J1 titles, in 2012, 2013 and 2015.

Moriyasu is now on schedule to be the first national team head coach since Frenchman Philippe Troussier to simultaneously coach Japan's Olympic squad. Troussier led Japan at the 2000 Olympic Games and in 2002, where he became the first head coach to take Japan to the knockout phase at a World Cup.