The United States on Thursday accused North Korea of breaching a U.N. sanctions cap on refined petroleum through illicit ship-to-ship transfers, according to a document seen by Kyodo News.

Washington made the case to the U.N. Security Council's sanctions committee on North Korea at a time when it is seeking to negotiate the denuclearization of the isolated country.

During the first five months of the year, North Korean tankers "have called in port in the DPRK at least 89 times likely to deliver refined petroleum products illicitly procured via STS (ship to ship) transfers," the document said, using the acronym of the country's official name, the Democratic People's Republic of Korea.

The United States called for all U.N. member states to refrain from exporting such products to North Korea, according to the document.

The latest U.S. information provided three possible scenarios to determine the amount of illicit refined petroleum products the North is likely to have received.

Supposing the tankers filled to 33 percent, 50 percent or 90 percent capacity, it was determined that even the lowest threshold would have resulted in the transfer of 506,529 barrels of refined petroleum, surpassing the 500,000 barrel cap. 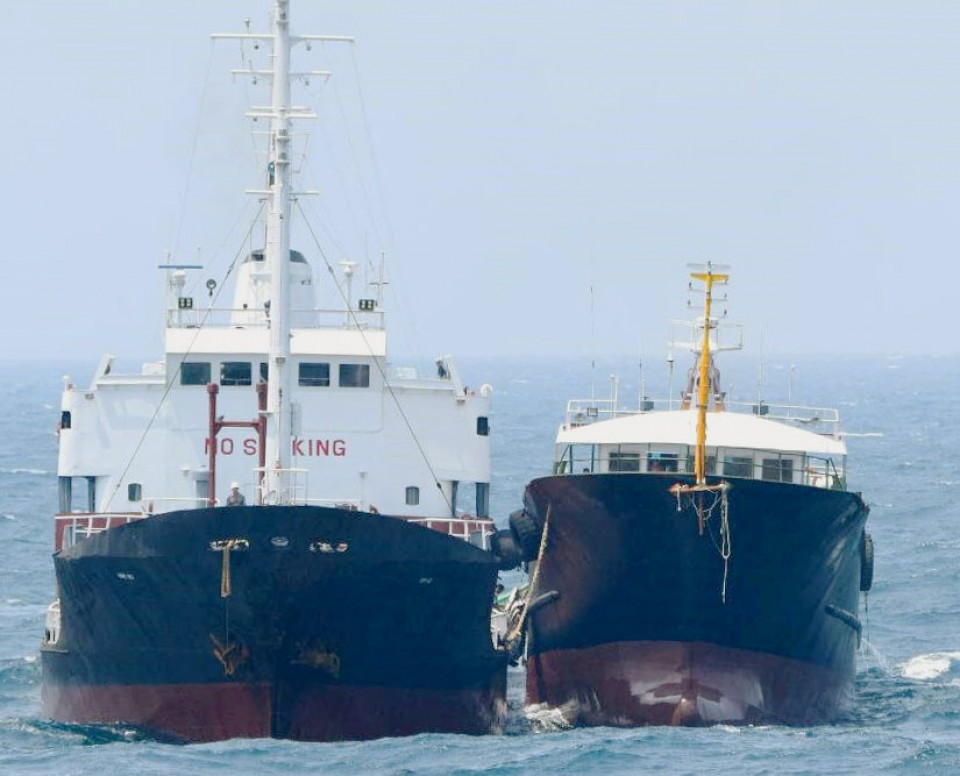 (A North Korean tankar, left, tied to a ship of unknown nationality in the East China Sea on June 29, 2018)
[Coutesy of Ministry of Defense]

China and Russia have reported to the committee that they have sold refined petroleum products to North Korea. The document calls for putting an end to the sales and transfers "immediately" since North Korea is believed to have exceeded its annual limit.

Talks on denuclearization of North Korea have not progressed, despite an apparent easing of tensions since U.S. President Donald Trump met North Korean leader Kim Jong Un in Singapore on June 12.

In a joint statement issued after the first-ever U.S.-North Korea summit, Kim committed to the "complete" denuclearization of the Korean Peninsula while Trump promised to provide security guarantees to Pyongyang.

Last week, however, the North's Foreign Ministry accused Washington of pushing a "unilateral and gangster-like demand for denuclearization."

U.N. Secretary General Antonio Guterres, commenting on the latest interactions between U.S. and North Korean officials, likened them to getting "hiccups." But he was positive about the larger aim.

"There will be many (such hiccups) inevitably, but I think there are very good possibilities for this dialogue to lead to a solution, a positive solution," he said at a press conference.

"This is a complex process. It's a difficult negotiation, and I believe there will be inevitably some ups and downs along the way, and we need to persist and to ask all countries in the region to help facilitate things for agreements to be reached."

In addition to weighing in on the political front, Guterres also spoke about the head of the Office for the Coordination of Humanitarian Assistance, Mark Lowcock, who just ended a three-day visit to North Korea.

After meeting with senior government officials and representatives from U.N. agencies there, the undersecretary general flagged concerns such as over malnourished children and shortages of drugs and medical supplies.

"At the present moment, this is our track, to try to address directly the humanitarian aspects of all sorts that exist in North Korea," he added.