At least 10 people were believed buried alive by landslides in Hiroshima Prefecture on Friday as heavy rainfall continued in wide areas of Japan, with seven of them confirmed to be surviving.

The landslides were reported in the city of Higashihiroshima, while police in the town of Kaita in the western prefecture said they had received emergency calls from people saying they were trapped in cars in flooded areas, or they witnessed people being washed away in swollen rivers.

In the city of Hiroshima, police received an emergency call at around 6:50 p.m. saying a landslide had engulfed three houses. The police were confirming whether any people were missing.

Three people have been confirmed dead in the prefectures of Hyogo, Hiroshima and Osaka since the downpour began Thursday. The victims were caught in by flooding rivers. 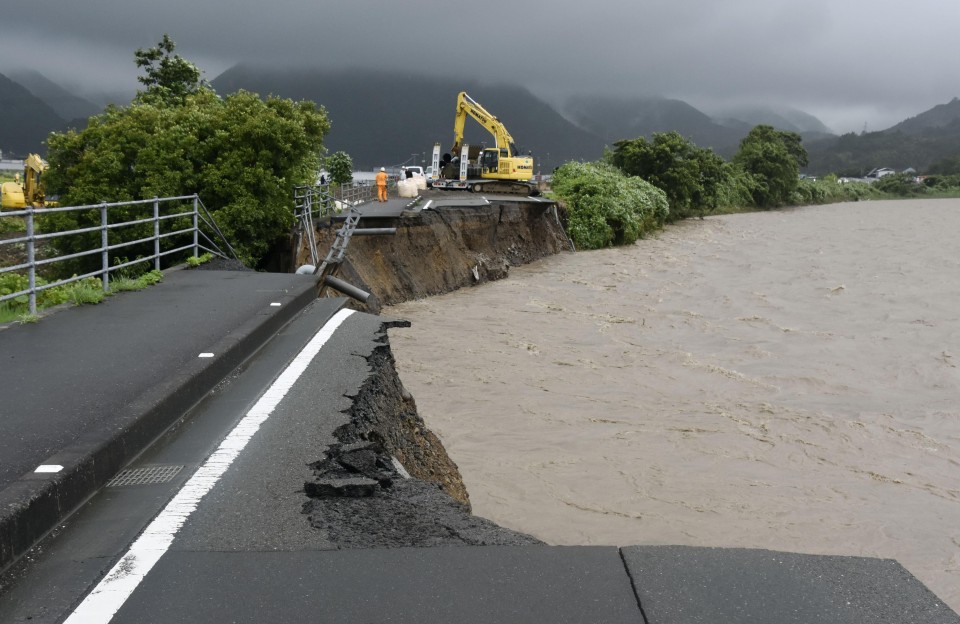 (A road cut off in Kochi Prefecture)

Evacuation orders were issued for nearly 170,000 people in nine prefectures in Kansai and other regions, including areas affected by last month's strong earthquake in Osaka Prefecture, according to the Fire and Disaster Management Agency.

A man was confirmed dead after being found in a swollen river in Hiroshima Prefecture around 6 a.m. Kazuhiko Miyane, 59, is believed to have been washed away from near his house, police said.

Sachie Takigami, 52, from Kyoto Prefecture, was found dead in Osaka Prefecture after leaving home in a car later found in a swollen river.

A landslide struck some homes in Fukuoka Prefecture around 7:30 a.m. Six people were rescued from the site, rescue workers said.

Chief Cabinet Secretary Yoshihide Suga told a press conference, "I want people to try to evacuate at an early stage and ensure their safety."

In the city of Kyoto, roads were inundated near a bridge in Arashiyama, a popular tourist spot, and the level of the Kamo River running through the city's central area was swollen.

A woman from Osaka who passed the Kamo River while commuting to work for more than 30 years said, "I have never seen it swollen to the extent that the walking trail along it was flooded. It is terrifying."

Sanyo shinkansen bullet train services in western Japan were partially halted from Thursday night due to heavy rain and the risk of mud flowing onto railway tracks in some areas. West Japan Railway Co. resumed operations Friday morning, but was again forced to partially halt services in the evening. 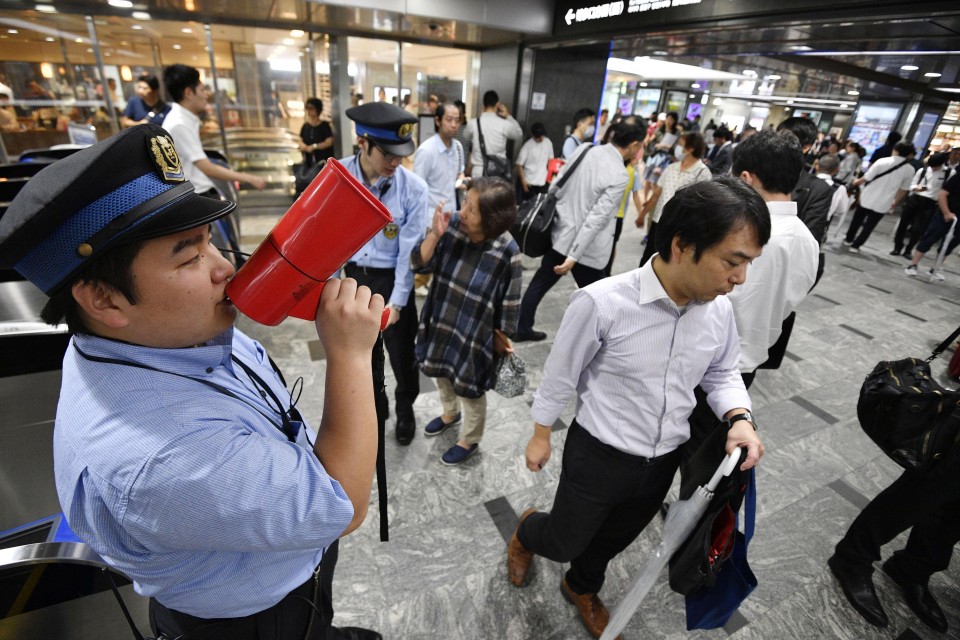 Many people were left stranded in train stations and lined up for taxis due to a number of cancellations caused by the heavy rain. Some shinkansen bullet trains were opened as temporary "hotels" for people who needed to stay overnight and about 420 people did so.

Atmospheric conditions have become very unstable as warm and damp air is flowing into a seasonal front, potentially causing gusts and tornados, the agency said.

It warned of particularly heavy rain of up to 80 millimeters per hour with lightning on Saturday. In the 24-hour period through 6 p.m. on Saturday, 400 mm of rain is forecast in the Shikoku region, 300 mm in the Kyushu region and 200 mm in the eastern, central and western Japan regions.