Japan may have been crushed by their last-gasp loss to Belgium that ended their dream of reaching their first-ever World Cup quarterfinals, but the Samurai Blue and their fans have certainly won plaudits around the world on social media.

"Absolutely gutted for Japan. Belgium may have won the game but Japan won hearts," tweets @OMDitsme. 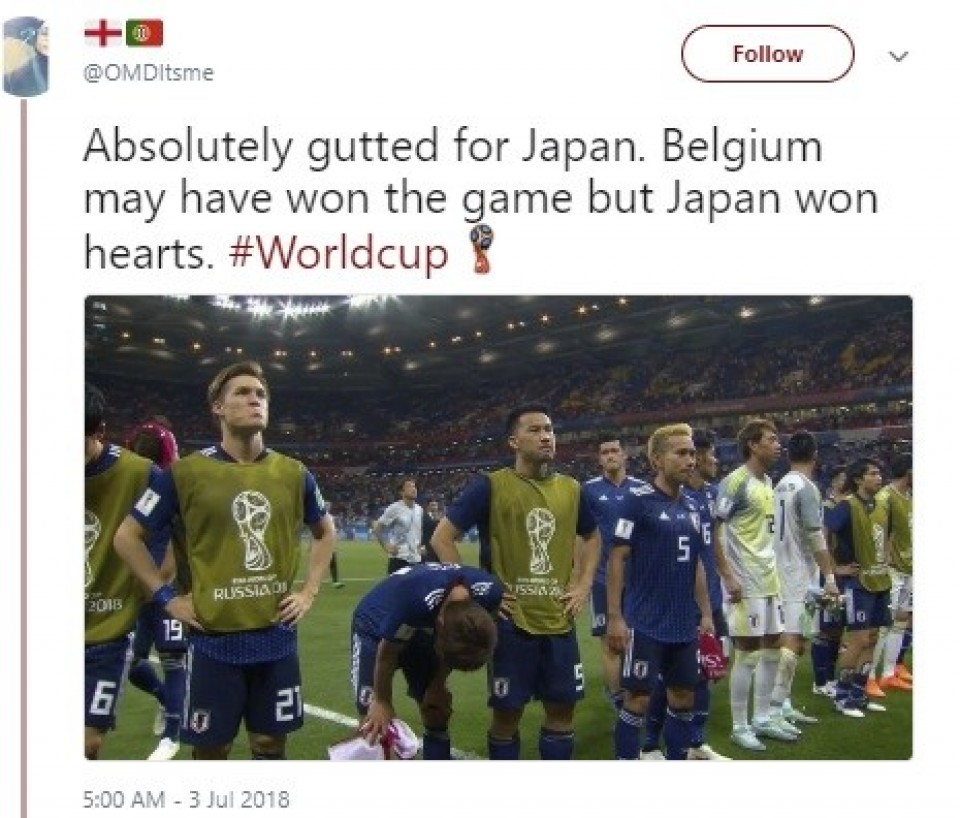 @JUNICH_DAVIDSON, a comedian known for his impersonation of Japan's star midfielder Keisuke Honda, tweets, "Utterly devastated, but they've put up the best fight ever! Absolutely moved by the game. I guess in the end it came down to Belgium's underlying strength. Thank you to our players!" 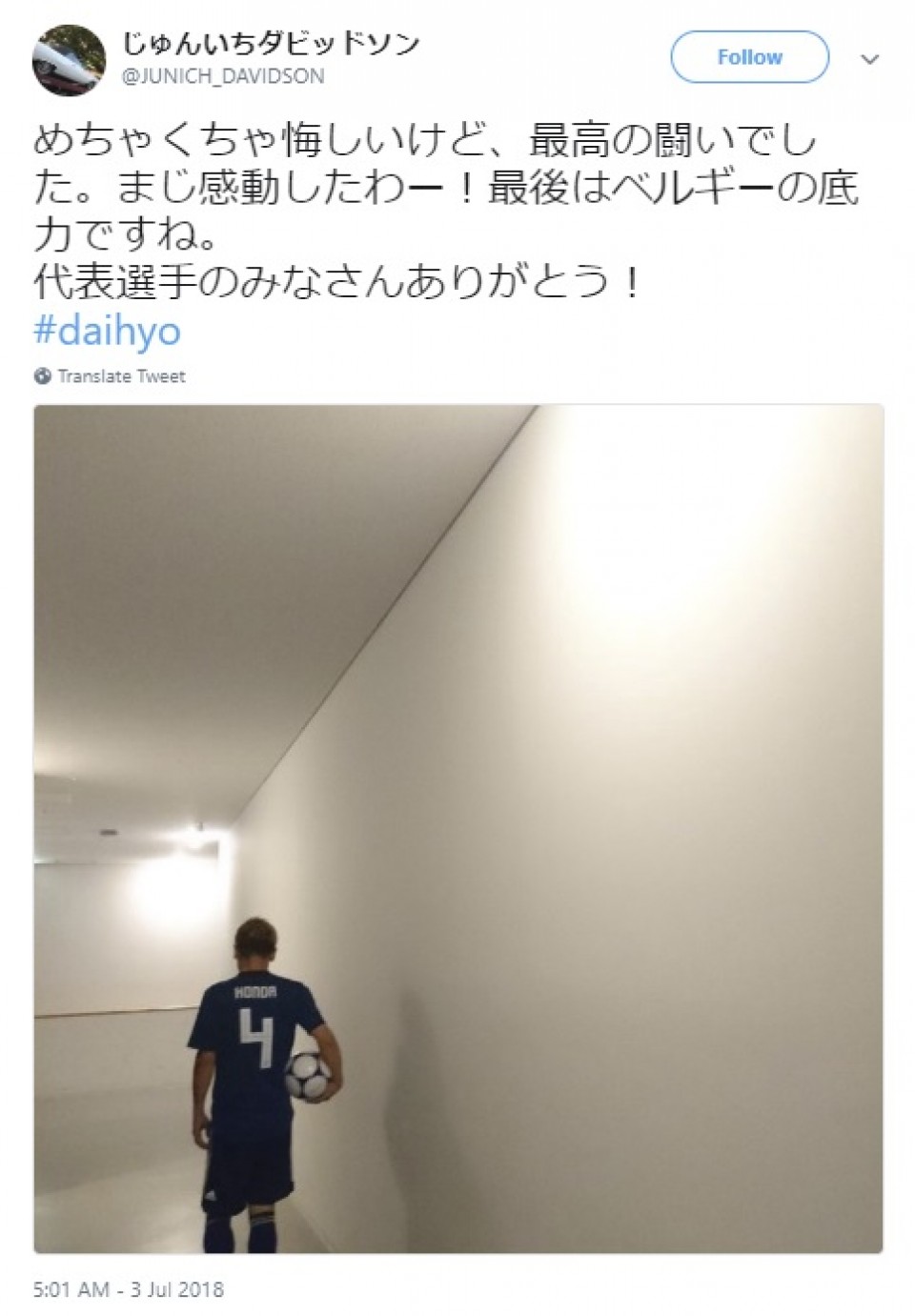 "Really impressed with Japan. Switching cohesively between 4-4-2, 4-2-4 and 4-3-2-1 and so well disciplined," @hughwizzy tweets. "Call it daft or brave to be attacking like they were at the death and yes, it was ultimately their undoing, but they can go home with heads held high."

Former Japan midfielder Takashi Fukunishi writes on his official Twitter account, "I am so moved by the great performance by our team's players and staff. Regrettable, very regrettable. But truly great efforts made. The team played with unity. Thank you!" 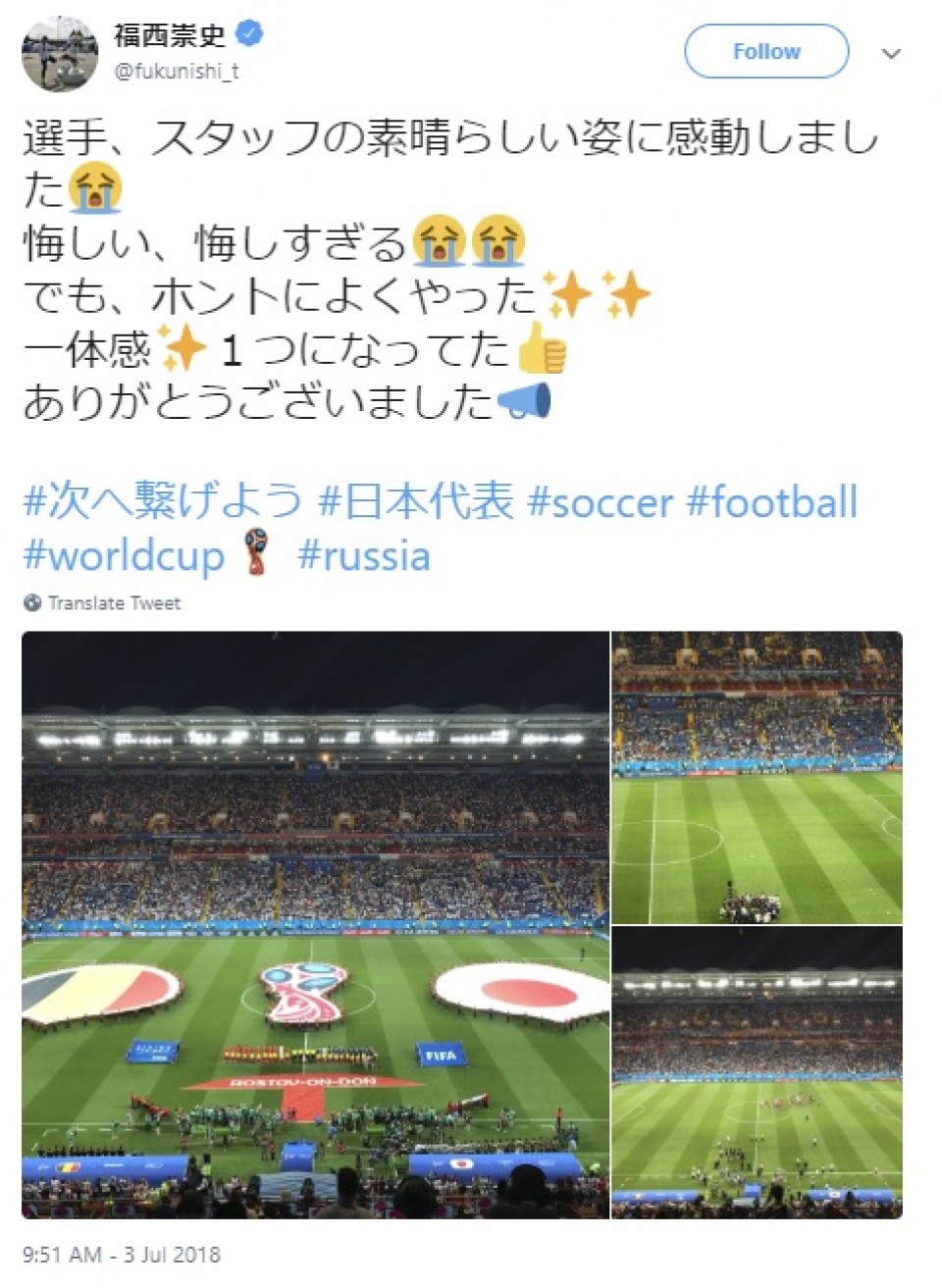 At a World Cup where play-acting and gamesmanship by some players including Brazilian star Neymar in particular have been in the spotlight, Japan and Belgium won applause for letting their football do the talking.

"Brilliant. Both teams playing the game how it should be," @Nigelrefowens tweets. "No diving or rolling around and not running up too and abusing the referee. Well done all."

The FIFA World Cup official account attached a photo of a dejected-looking Takashi Inui, one of Japan's midfielders, to its tweet, saying, "Thank you for contributing so much to a World Cup classic and for everything you've added to Russia 2018, Japan." 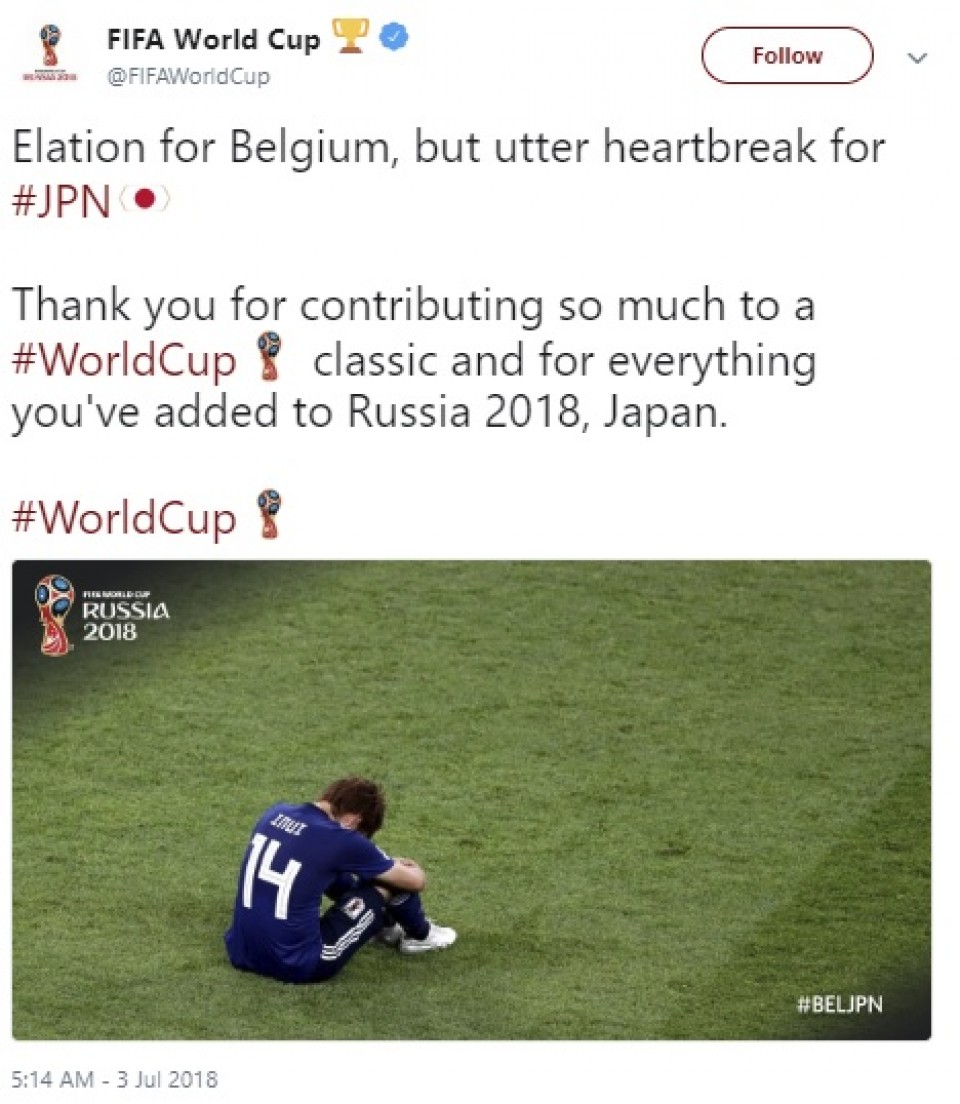 "I wonder if there has ever been a day when I've seen this many 'arigato' on social media feeds, which usually is filled with criticisms and bad-mouthing of other people," Facebook user @isaking2013Officeal says. "Thank you, Team Japan! You were absolutely superb!" 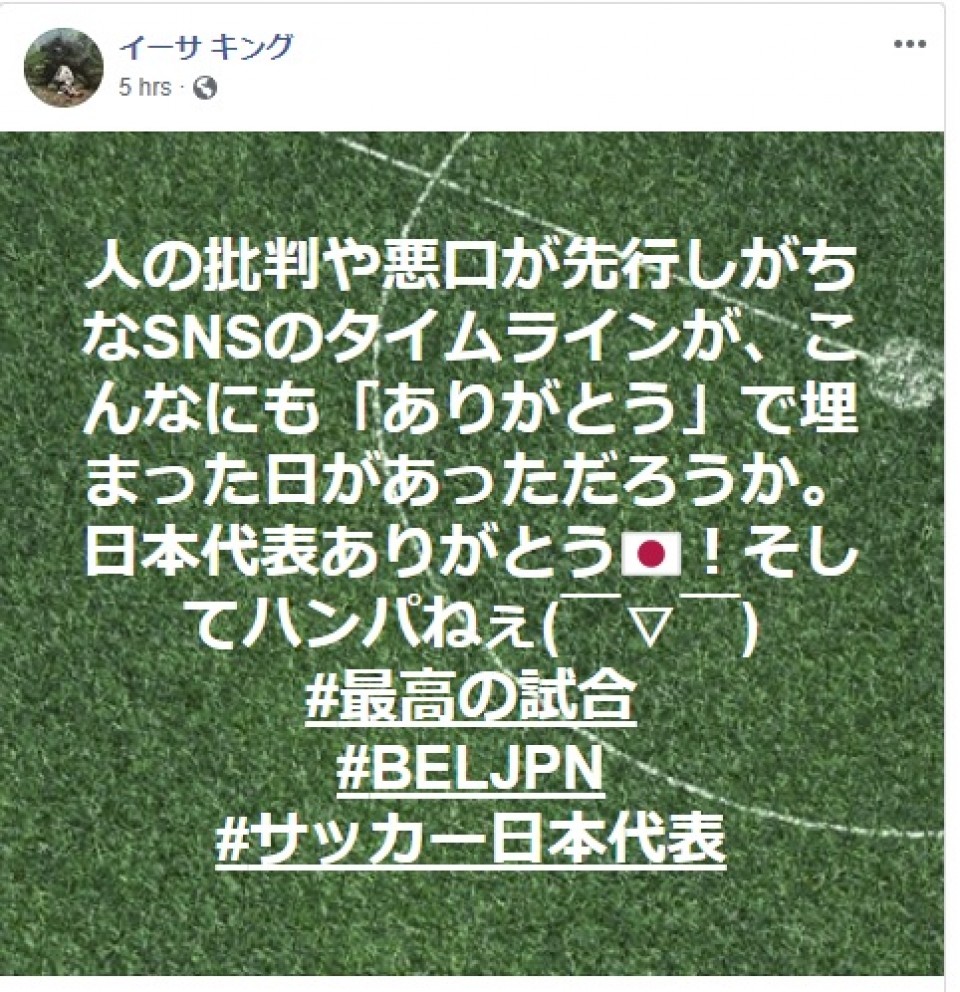 Even after losing the game, the Samurai Blue and their fans continued to impress off the field.

Posting a photo of the Japanese dressing room after the heartbreaking loss, FIFA general coordinator Priscilla Janssens (@priscillaboca) writes of the team: "Thanked their fans in the stadium, cleaned up everything (bench and dressingroom) and spoke to media. Even left note with 'thank you' in Russian. What an example for all teams!!" 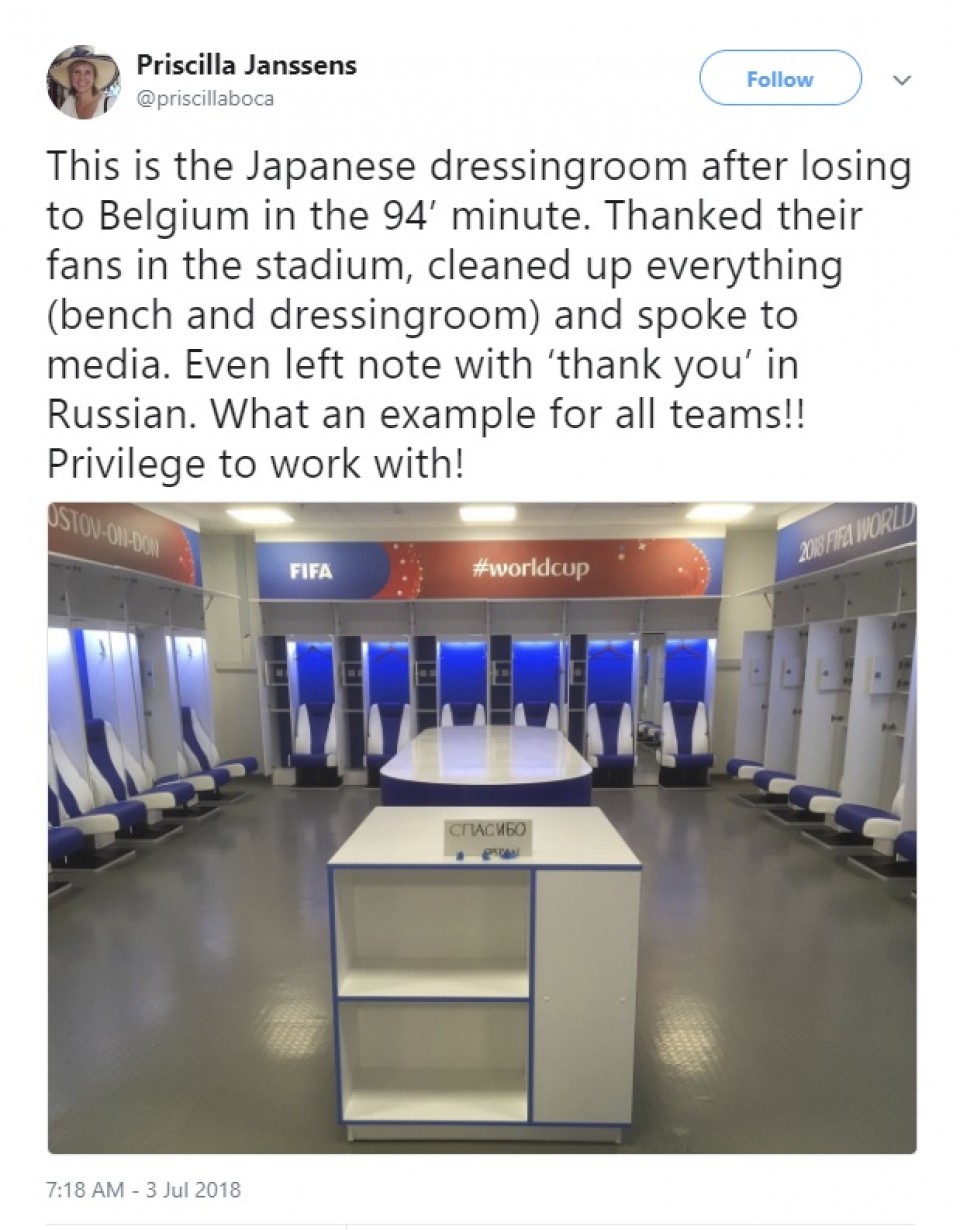 On the spectator stands at Rostov Arena, Japanese fans were lauded for their display of sportsmanship in sticking with their now-famous ritual of picking up trash after the game, all while fighting back tears and disappointment from the loss. 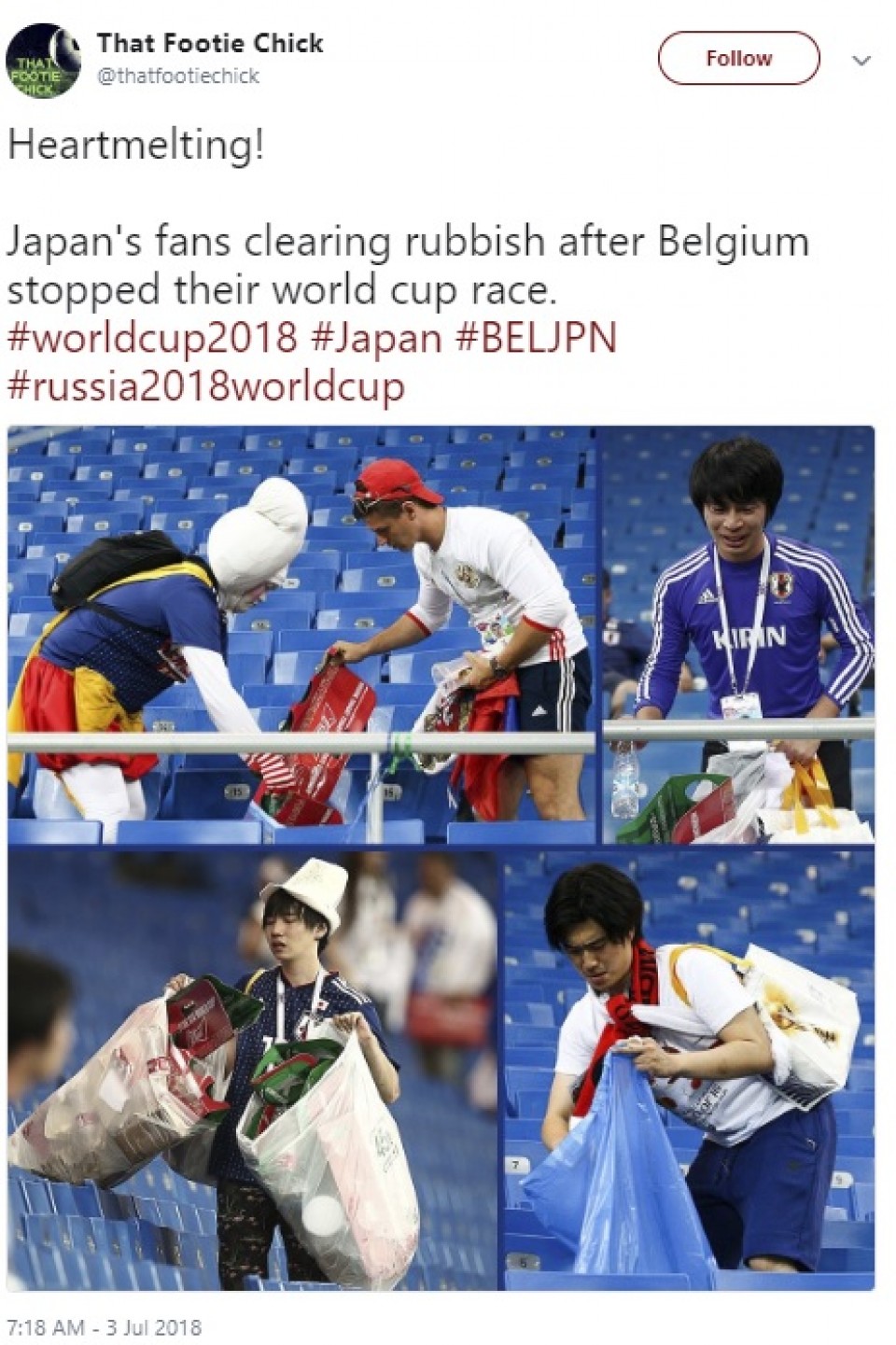 "Knocked out of World Cup 2018 and still tidying up after a game, Japan fans you are something special," notes @IndyFootball. 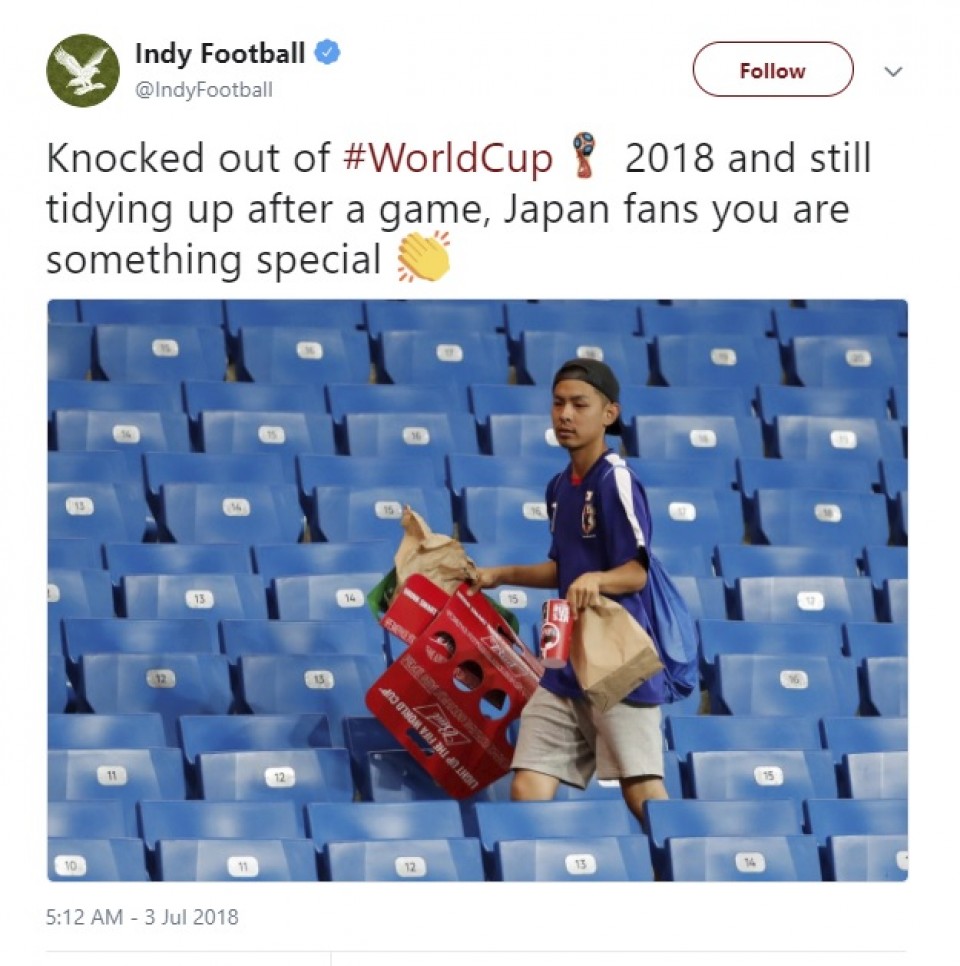 @Sporf tweets, "Lose 3-2 in the 90th minute to Belgium. Still stay behind and clean rubbish from the stands. Take a bow, Japan fans." 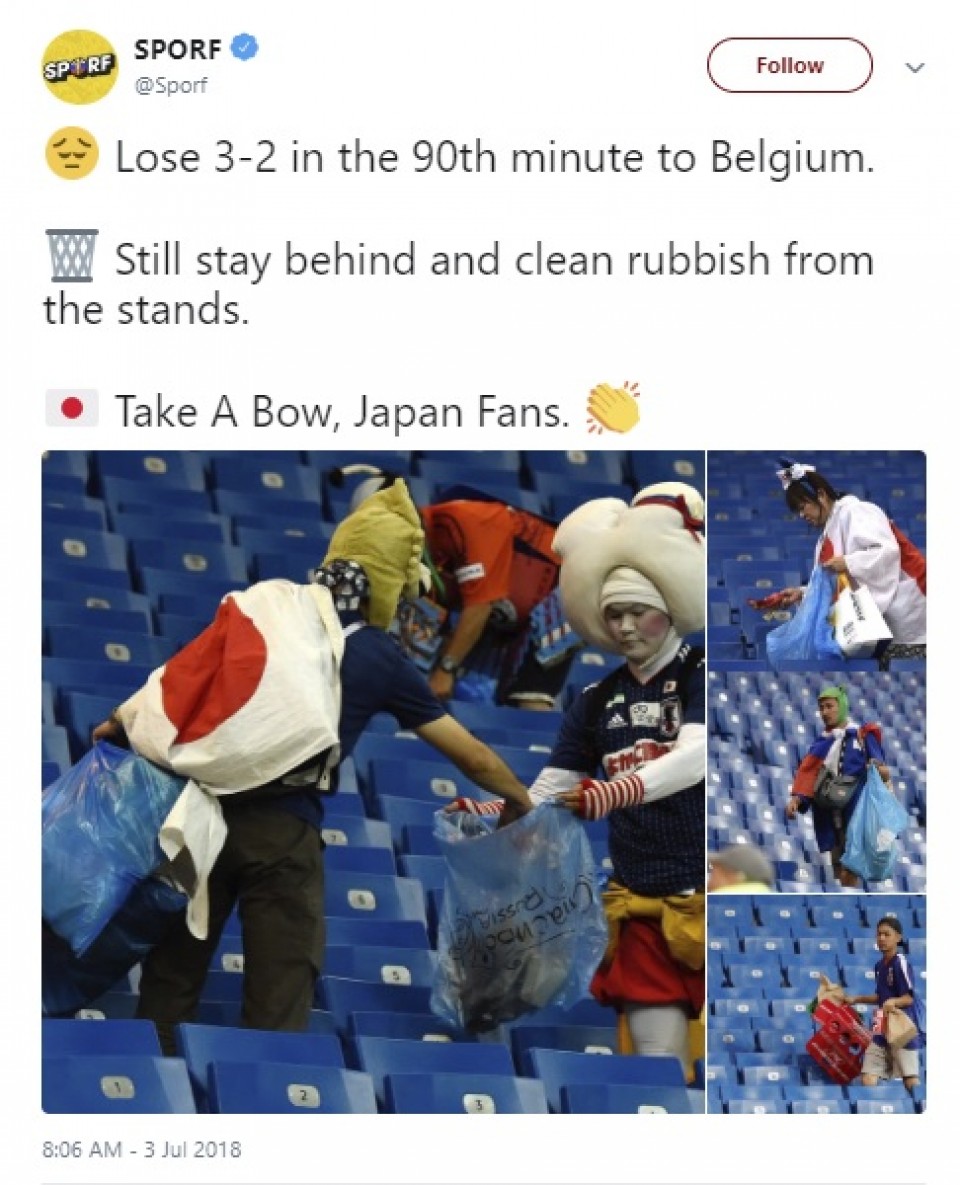 Japan's 2018 World Cup is over, but the Samurai Blue can be proud of the respect and support they have won in Russia. Meanwhile, many fans might take a little while to recover from the heartbreak, as perhaps best described by @ballsdotie:

"Still not right after that Japan defeat. Boiled the kettle for tea 20 minutes ago but just been sitting down, staring into space and pondering our existence ever since. The tea will be ruined."

More on the Samurai Blue: