Japan is bracing for a powerful typhoon slowly approaching the country's central coast on Saturday, as the tropical storm is likely to bring heavy rain in regions that have already been ravaged by flooding and landslides.

The impact of Typhoon Jongdari was already felt in Odawara, Kanagawa Prefecture, near Tokyo, where police received an emergency call around 7 p.m. reporting that several vehicles including an ambulance were stuck on a water-covered road near the ocean due to high waves. Police said one man from one of the vehicles is missing.

Coming less than a month after torrential rains devastated western regions, the typhoon is forecast to make landfall in central Japan in the early hours of Sunday.

Local authorities in disaster-hit areas, where thousands of people remain living in shelters, set up new facilities Saturday, asking residents who are living in their homes to evacuate early as a precaution. 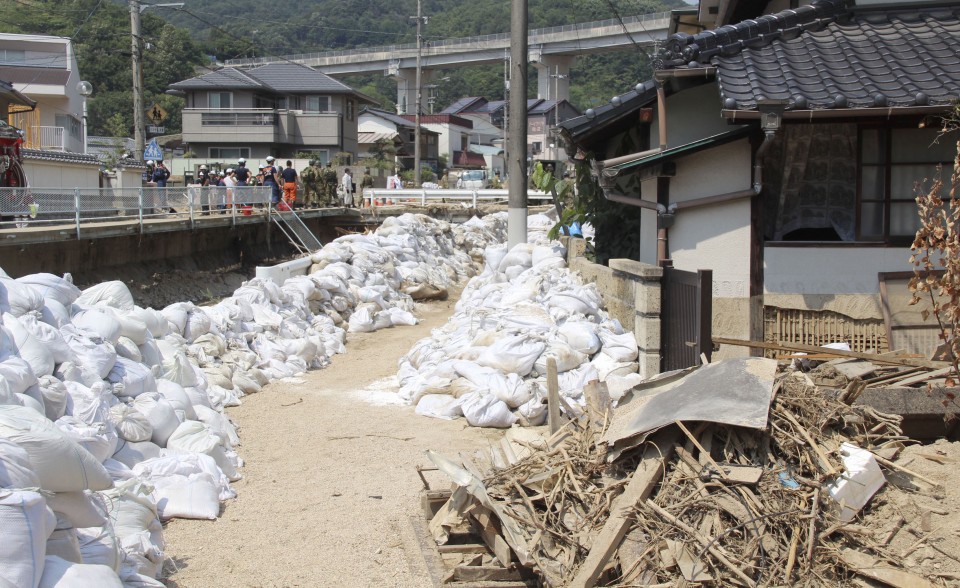 (Sandbags are piled in residential area of Saka, Hiroshima Pref., to evade flood)

Haruo Nanri, 80, who has been living in an elementary school in Hiroshima city following the rain disaster, received a fresh evacuation advisory when he was preparing to return home after removing the soil from his home.

"I thought I could finally go home," Nanri said, after deciding to extend his stay in the school due to the approaching typhoon.

In western Japan, massive rainfall of more than 80 millimeters per hour can occur until Monday, the weather agency said, warning of landslides, flooding, storm and high waves.

Maintaining its strength, the typhoon is packing winds of up to 180 kilometers per hour.

Transportation has been affected, with airlines canceling more than 280 flights Saturday.

As of 9 p.m., the season's 12th typhoon was moving over the Pacific Ocean about 60 km southeast of Omaezaki, Shizuoka Prefecture, and heading west at a speed of 35 kph. It had an atmospheric pressure of 970 hectopascals at its center.

The Japan Meteorological Agency forecast that after the typhoon makes landfall, it is likely to further slow down while continuing its westbound movement, passing through the country's Kinki, Chugoku and Shikoku regions, and reaching Kyushu in the southwest on Sunday night.

Typhoons typically approach the Japanese archipelago from the southwest, and many follow a southwest-to-northeast course due partly to the effect of the westerly jet stream and high pressure over the Pacific.

The expected unusual course has prompted Prime Minister Shinzo Abe to issue a rare warning Friday about the weekend storm, particularly for those affected by the massive flooding in western Japan earlier this month that killed 224 people and destroyed tens of thousands of homes. 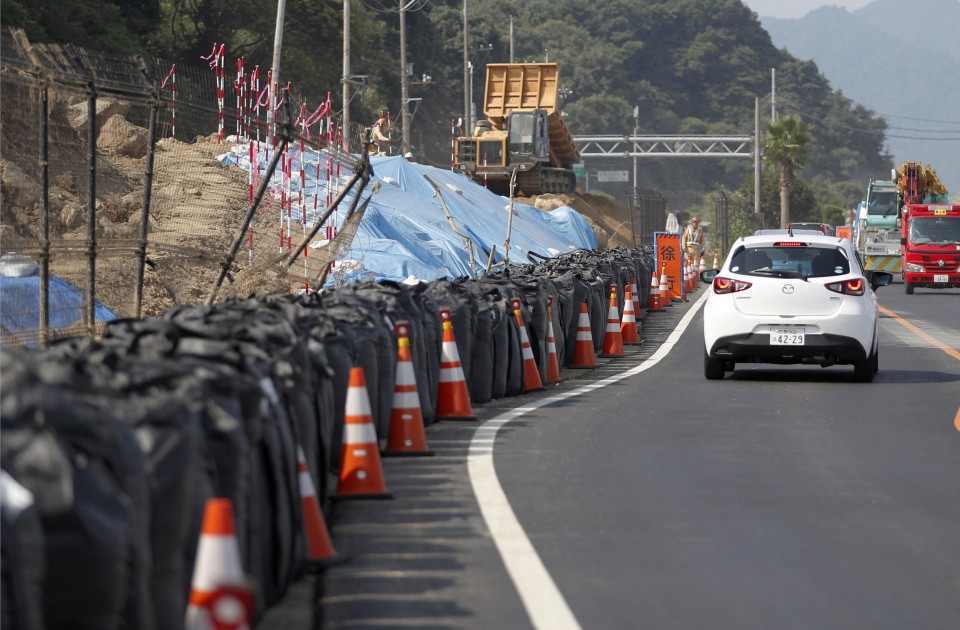 The country has also been gripped by a heat wave that immediately followed the rain disaster and which the agency has declared a "natural disaster." Extreme heat pushed the mercury to a record high 41.1 C on Monday and claimed dozens of lives, mostly elderly people from heatstroke.

In the 24-hour period through 6 p.m. Sunday, 400 mm of rain may fall in some areas in eastern and central Japan, while the expected rainfall in some western Japan regions are 250 mm.