Japan wants to start accepting more foreign workers from April next year by introducing a new status of residence, Prime Minister Shinzo Abe said Tuesday, as the country grapples with a serious labor crunch across many of its industries.

In a meeting with Cabinet members, Abe instructed them to speed up preparations to realize the targeted beginning period of the plan that will open the door to blue-collar laborers from abroad in addition to currently accepted highly skilled foreigners.

In what could be a turning point for Japan's labor market, the government expects to accept hundreds of thousands of foreigners for simple jobs, mainly at small and medium-sized companies, as well as in the nursing care and agricultural sectors.

At the same time, with the aim of strengthening management of foreigners and preventing the number of those overstaying their visas from increasing, the government is considering reorganizing the Immigration Bureau and tightening regulations, officials said.

The Justice Ministry is seeking to set up an affiliated agency that will solely be in charge of dealing with low-skilled foreign nationals.

"To create an environment in which foreigners can live smoothly is an important issue," Abe said during the meeting that was convened after the Cabinet approved last month the plan to increase the foreign labor force. 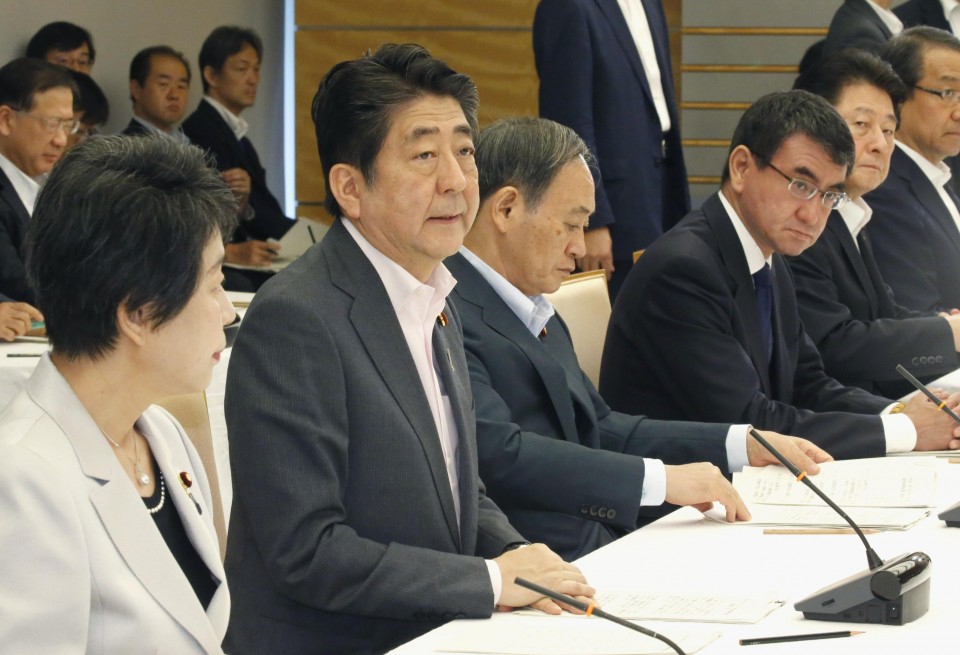 (Abe, second from left, meets with his Cabinet ministers)

Currently, each foreigner needs to visit the bureau for visa procedures. To ease possible congestion at counters, the ministry plans to allow companies employing blue-collar foreign workers to take care their applications on behalf of them through the Internet.

The government wants to submit a bill to revise the nation's immigration law to an extraordinary Diet session expected to be convened in the autumn.

Before introducing the new system, the government still needs to specify which industries will be eligible to offer foreign nationals menial jobs and beef up measures against potential abuse of the framework.

Under the plan, a new visa status valid for up to five years in principle will be created but workers will be banned from bringing their family members. The government has said they are different from immigrants.

The workers are also required to fulfill certain conditions, including passing skills tests and Japanese language proficiency exams. But people who went through technical training in Japan for more than three years will be exempted from taking the tests.

Abe called for a review of the existing labor system at a meeting of the Council on Economic and Fiscal Policy in February.

The nursing care, agriculture, construction, hotel and shipbuilding sectors were initially considered as five areas where low-skilled foreign workers will be employed, but the scope of the new framework is likely to be expanded to the manufacturing and fisheries industries.

Japan faces a severe labor shortage amid a declining population and the aging of its society. In 2017, there were 150 job openings for every 100 workers, the most in over four decades.

As of October 2017, Japan had about a record 1.28 million foreign workers, with Chinese accounting for 29 percent, the biggest portion, followed by Vietnamese, Filipinos, Brazilians and Nepalese, according to the labor ministry.

The new system may help prevent the scarce labor force from posing a serious challenge to the economy's growth prospects, but critics view it as a way to import cheap labor, pointing out that foreigners from developing countries who receive on-the-job training under government programs are often found to have been made to work under poor conditions

Japan population declines at fastest pace yet to 125.2 mil.: gov't