At least 50 people are dead and about 50 missing due to torrential rains which continued to fall Saturday across a wide area of western Japan, causing landslides and flooding that destroyed homes and swept away cars.

Evacuation orders or advisories were issued for 4.72 million people at one point, while around 48,000 members of the Self-Defense Forces, police and firefighting service were mobilized to search for trapped or injured people or the bodies of the dead.

The Japan Meteorological Agency had issued emergency warnings about the potential for severe flooding and landslides, warnings only issued when it anticipates the sort of extreme conditions that occur just once or twice in 50 years. The special warnings indicate people in the affected regions should remain on high alert, but are not compulsory evacuation orders.

As a result, many people in Japan tend to remain in their homes, even in mountainous areas prone to landslides triggered by heavy rain.

Since the downpour began Thursday, the weather agency has forecast record amounts of rain through Sunday, warning of flooding, mudslides and lightning strikes.

Hiroshima Prefecture was hit the hardest by landslides that claimed 22 lives, while 18 died in Ehime Prefecture, with others killed in Osaka, Shiga, Hyogo, Okayama, Yamaguchi and Fukuoka prefectures. 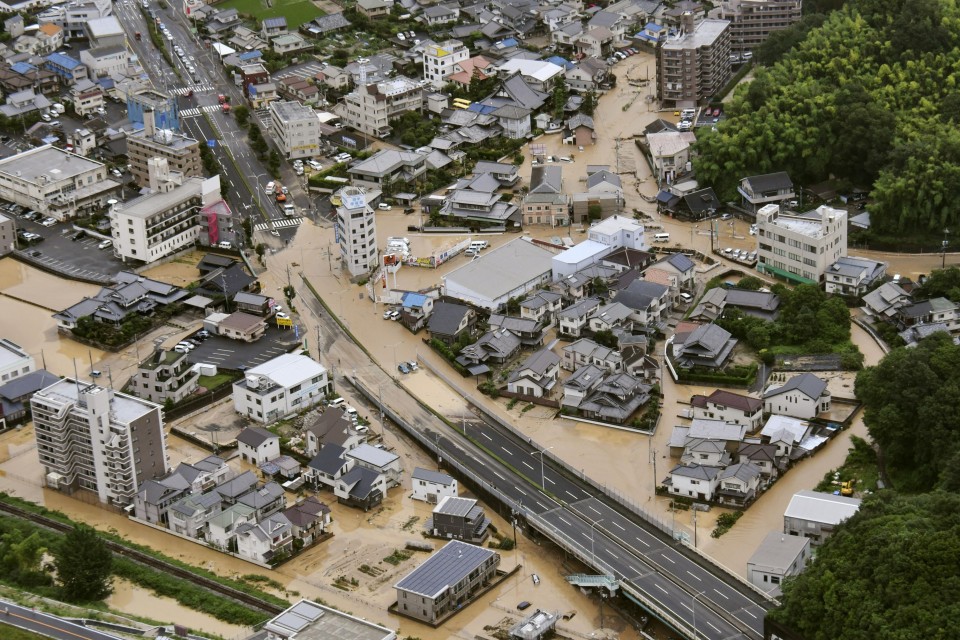 In August 2014, 77 people died in Hiroshima when torrential rain triggered massive landslides that destroyed homes. But a 71-year-old man there said Saturday, "It was heavier rain than four years ago. I was scared, thinking what would become of me."

In Seiyo, Ehime Prefecture, five people were confirmed dead due to the torrential rain, including people swept away in a car. On Nuwa Island, off the prefectural capital of Matsuyama, a woman in her 30s and her two children were killed when a mudslide hit their home.

In Kasaoka, Okayama Prefecture, six workers were buried when a landslide crashed into their factory early Saturday morning, with one person confirmed dead.

Also in Okayama, a nursing home for the elderly was inundated and about 80 people were temporarily stranded on the second floor, while more than 10 people climbed onto the roofs of their homes as water surged in the prefecture.

At an apartment complex in Hiroshima, about 100 people were stranded from Friday night by flooding in the area. On Saturday, rescue workers transferred them to safety, by carrying them through swiftly flowing dark waters.

In a wide area of southwestern Japan to western Japan, rivers were swollen and overflowing, and bridges were washed away, while transportation was disrupted, with shinkansen bullet train services suspended in most parts of western Japan.

Mitsubishi Motors Corp. said it had halted operations at its Okayama Prefecture plant as it was unable to procure parts, while Daihatsu Motor Co., a minivehicle making unit of Toyota Motor Corp., said it had suspended production at two plants in Osaka and Kyoto for the same reason.

The government set up a liaison unit in the crisis management center of the prime minister's office to gather information.

At a meeting with ministers, Prime Minister Shinzo Abe directed them to "prioritize lifesaving and send rescue crews without delay," according to Chief Cabinet Secretary Yoshihide Suga. 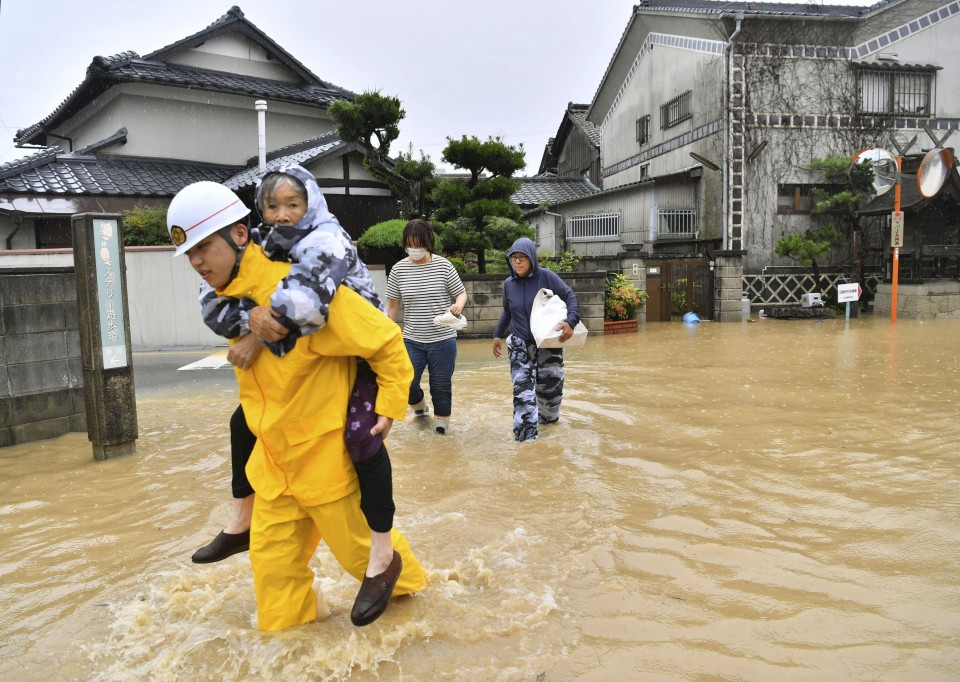